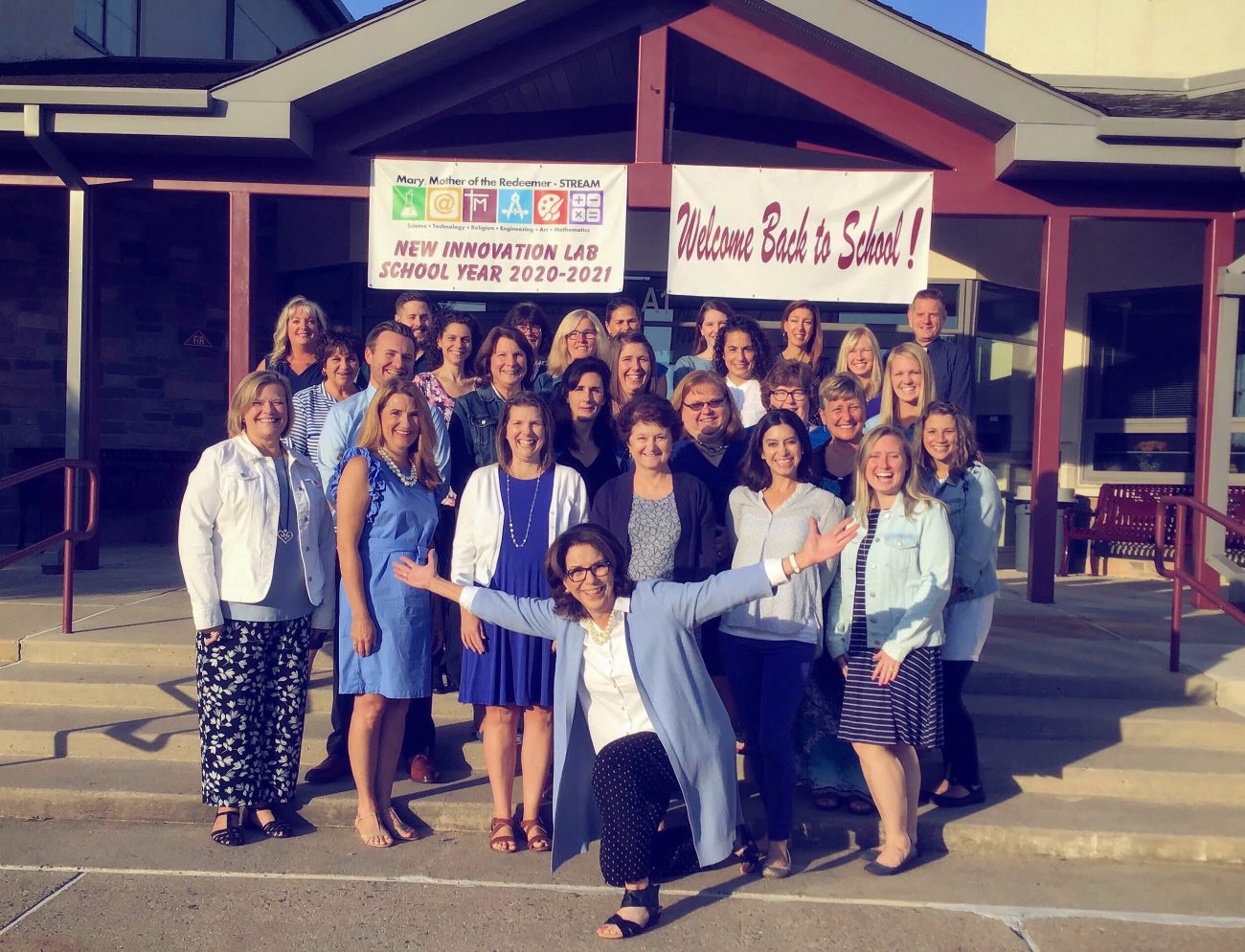 The faculty of Mary, Mother of Redeemer School in North Wales, with Principal Denise Green Judge at center front, celebrates their recognition as a 2019 National Blue Ribbon School.

It takes financial sacrifice to send one’s children to Catholic schools. A primary reason to send them is for the Catholic values, of course. But what about the academics — how well do they do on that score? Are the parents getting a bigger bang for their buck?

Absolutely, if you look at the annual Blue Ribbon Schools of Achievement Program sponsored by the U.S. Department of Education.

This year there were 362 schools recognized across the country, 312 for public schools, 50 for nonpublic schools. The total for Pennsylvania was 18 including five elementary schools of the Philadelphia Archdiocese, the only nonpublic Pennsylvania schools among this year’s honorees. All were in the “exemplary high performing schools” category.

Not bad considering that there are more than 3,000 public schools in Pennsylvania and only 137 Catholic schools in the archdiocese, including private schools and Independence Mission Schools.

The awards will be officially awarded by U.S. Secretary of Education Betsy DeVos during ceremonies in Washington, D.C. next month.

At Cardinal John Foley School, which is growing, Principal Mary Ann DeAngelo credits a great faculty and staff as well as parents having a shared mission. They all are “committed to Catholic education not just academically but spiritually,” she said.

Academically the students at Cardinal John Foley School are doing very well. The students as a whole place high in their Terra Nova Achievement tests, one of the criteria used in choosing the high performing schools of excellence.

One of the unique features at Cardinal John Foley is the opportunity for the students in the upper grades to participate in non-graded elective courses including cooking, woodworking or service programs, just to expand their interests without the pressure of grades.

She praised the “magnificent” faculty and said, “Like all Catholic schools they aren’t here for the money. It is a vocation.”

The award, Judge said, “is a recognition of the students, of course, and an honor to the parish as a whole. We still have a school, thanks to God and the parishioners.”

The school must be excellent to survive, she believes, because it is surrounded by excellent schools in their area.

“We have to take those extra steps and it goes back to establishing a relationship with the children, with their faith and with their families,” the principal said.

St. Pius X School’s principal, Immaculate Heart Sister Kathleen Touey said, “We have a strong program and our pastor (Msgr. William Kaufman) is supportive of whatever we need. Our faculty has very little turnover because it is not a job, it’s vocation. Our teachers are extremely dedicated and our pastor is very supportive.”

The whole school is thrilled with the affirmation and as a matter fact since the news broke, “We’ve gotten calls from several people wishing to enroll their children here,” Sister Kathleen said.

Academics of course is at the heart of the awards and Sister Kathleen credits outstanding math and language arts programs plus state-of-the-art technology — all the students in grades three and above have their own Chromebook computers.

“In my heart I believe we already had the credentials for this award, it was just a matter of applying for it,” she said.

At SS. Colman-John Neumann, which has never been a large school, Principal Cathleen Lamberto acknowledged the school has academic excellence, which is the main focus of the National Blue Ribbon Schools program.

She credits her faculty and the parents who “are really supportive. It does take village to raise a child,” she said.

Just as important are the social justice programs. It might be packaging breakfast bags for Nutritional Development Services, taking up collections for needy families, or purchasing and wrapping Christmas gifts for distribution by the Salvation Army, as examples of community outreach.

SS. Colman-John Neumann also has learning programs outside the normal curriculum, with hands-on ungraded activities that encourage the creative side of the students.

At St. Thomas School, Principal John Keely, who has been at the school for six years, credits parish support through the pastor, Father Francis Groarke, along with really good teachers who are caring and knowledgeable for making the award possible. Not to be missed are the parents who are very supportive.

“We have technology here, smart boards and all of the things strong instructors can use to pass on the information,” he said.

In the past few years the school has upgraded its technology infrastructure with wi-fi internet connection, updated labs and library, as well as programs that will assist struggling students.

“We have parents who are proactive. Put it all together and you have a wonderful school,” Keely said.

Great Catholic schools – like all those represented by the five award winners — are definitely not a rarity in the archdiocese and well worth celebrating.

NEXT: Year of focus on missions wraps with events this Sunday