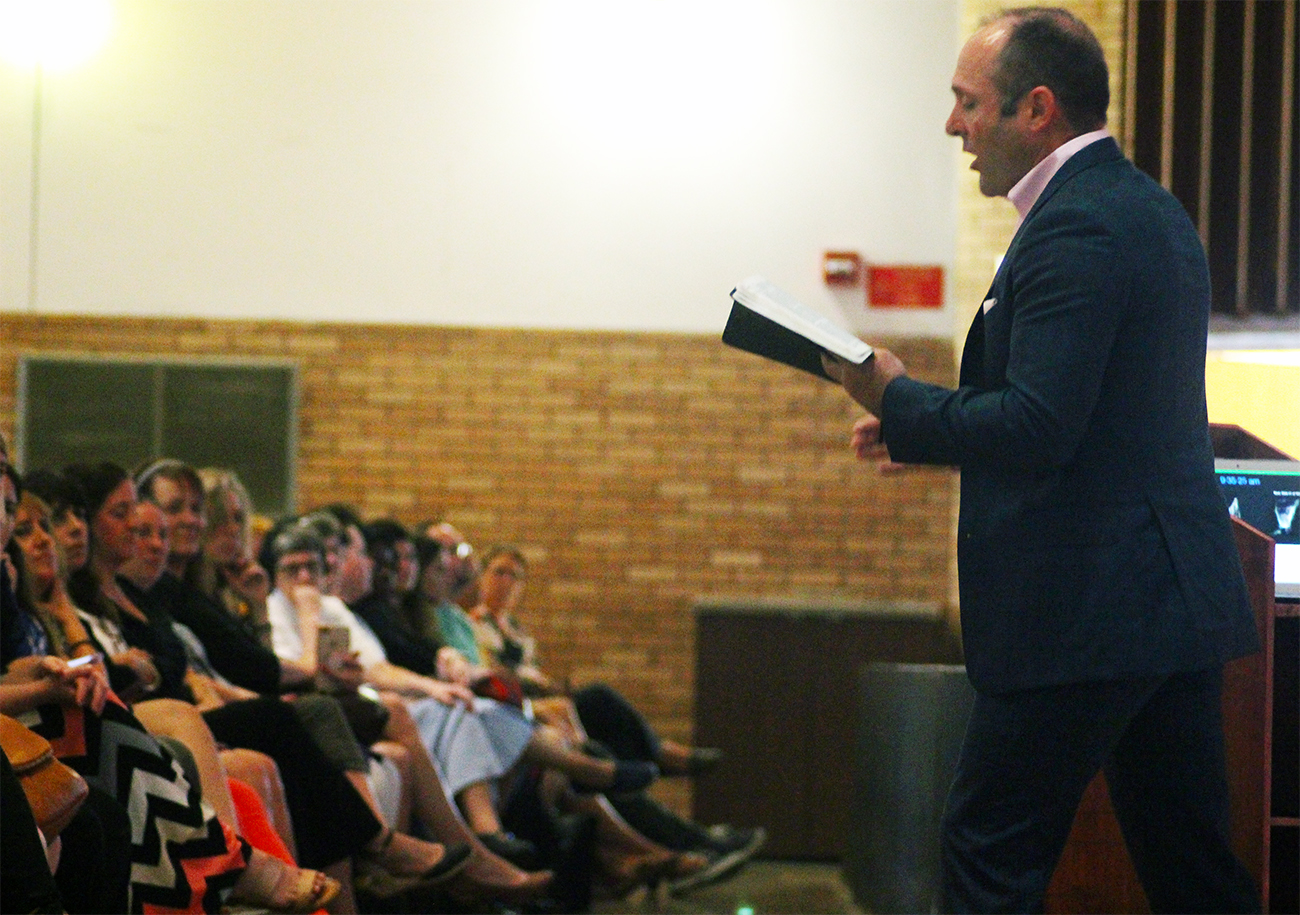 Exhaustion, burnout and cynicism aren’t inevitable for Catholic educators, according to Jonathan Doyle, author of “Tools and Fuels: How Catholic Teachers Can Become Saints, Beat Burnout and Save the World.”

Addressing some 2,000 of the area’s Catholic education professionals on Oct. 2, Doyle acknowledged that increased demands both in and out of the classroom can drain teachers and administrators, as well as clergy and religious.

“You are professional givers,” said Doyle, an Australian native and international speaker. “You give your emotional, spiritual and psychological energy every day.”

The key, he said, is to re-envision the ministry of Catholic education as a divine calling that only the Lord himself can sustain.

Doyle delivered his presentation at two sessions, held at both Archbishop Ryan High School and Cardinal O’Hara High School, that were part of an Oct. 2 professional day for teachers.

Sponsored by the Archdiocese’s Office for Catholic Education, professional days are scheduled throughout the academic year to provide teachers with resources for both career and spiritual development.

Doyle challenged his audience to reflect on God’s promise of provision, citing John 10:10, in which Christ declares, “I came so that they might have life and have it more abundantly.”

“He didn’t say, ‘I came so you could have a mediocre life,’” quipped Doyle, who drew on humor, personal experiences and Scripture throughout his talk.

Yet “some of us are breaking,” he said, under pressure from “increased complexity … in an environment of finite time and resources.”

He encouraged his listeners to “get to the end of themselves” as quickly as possible so that they could begin relying on God’s grace to fulfill their mission. 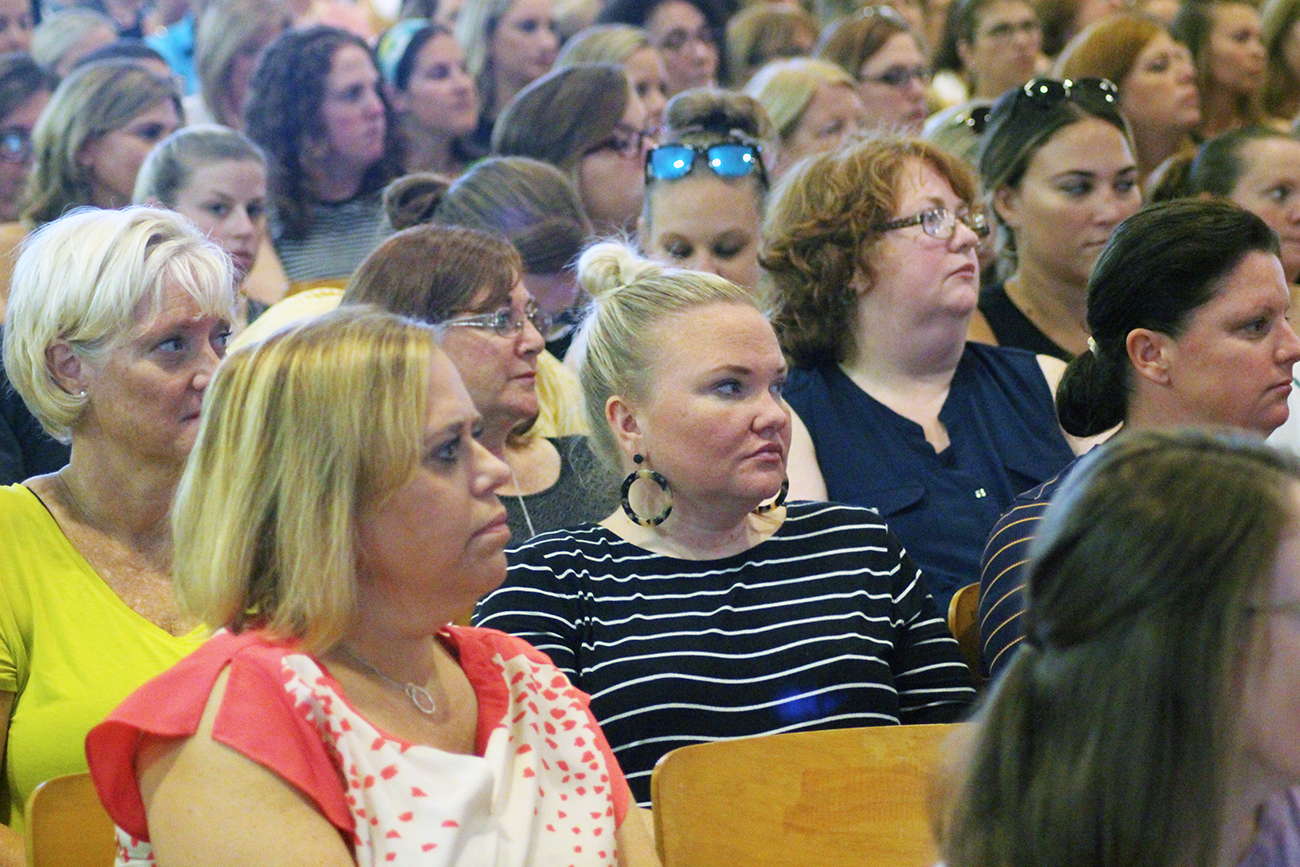 Doyle pointed to the late singer Johnny Cash, who struggled with drug and alcohol addiction, as an example of how natural talent “can’t be sustained by purely human means.”

In contrast, he said, St. Teresa of Calcutta undertook seemingly impossible tasks without despair, even amid long periods of spiritual dryness, since she drew strength from her relationship with Christ – a relationship that is available to all, Doyle stressed.

“Many of us in this room are living under a very great heresy: that we could never be saints,” he said.

On the contrary, Doyle said, God chooses to partner with us in a divine economy that is “radically different” from the world’s, where power, fame and gain are valued.

“In God’s economy, the smallest gestures in love of him and love of people are as important as the biggest things we do,” said Doyle.

Although the ultimate impact of a teacher’s work may take decades to manifest itself, Doyle said that the delay should not be cause for discouragement.

“If you crouch down to eye level with a kid that’s come from three generations of alcoholic dysfunction, and you speak the truth into their life, no one will ever see it, but you will be shown the difference it made,” he said.

Doyle’s talk resonated with both experienced and newer teachers in the audience.

“We need to get in touch with our roots, and we need to understand that we are not here randomly,” said Rick Adamsky, who has taught at Nativity of Our Lord Parish School for 33 years. “There is a purpose to all of this.”

Now in her first year of teaching of St. Andrew School in Newtown, Christina Williamson said that Doyle’s presentation reminded her to “put it in God’s hands.”

“As a first year teacher, you have a lot of stress,” said Williamson, who “felt called” to leave her previous career as an attorney in order to become an educator.

In particular, Doyle’s presentation reassured teachers that “they are not in this alone,” said Donna Moser, whose 30-year career has been divided between the former St. William Parish School and St. Cecilia Parish School, where she currently teaches pre-K.

“The resources are there for you,” said Moser. “There is no way I could do this without the Lord.”

PREVIOUS: Agency works to end hunger, one jar at a time

NEXT: Fewer in number, Father and Sister can’t minister alone