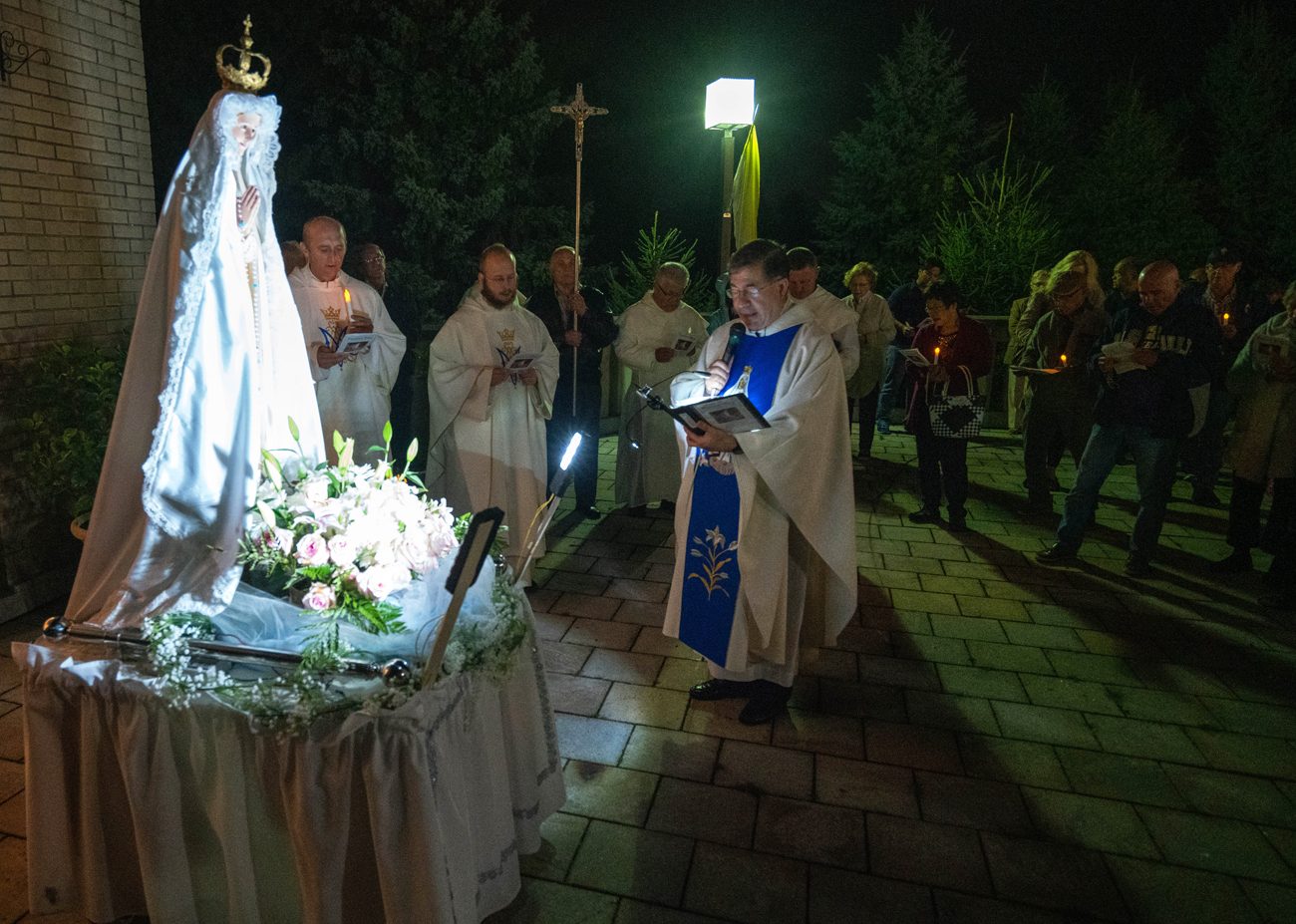 Father Frank Pavone leads prayers outside the Fatima Chapel at the National Shrine of Our Lady of Czestochowa, Doylestown.

The National Shrine of Our Lady of Czestochowa in Doylestown hosted its Fatima Day celebration Sept. 13 as Father Frank Pavone, national director of Priests for Life, celebrated a Mass and preached the homily.

At 7 p.m. every 13th day of the month from May to October, the shrine hosts a Fatima Day Mass in the lower chapel followed by the Act of Consecration to the Blessed Virgin Mary. A candlelight procession follows the Mass, with attendees walking the shrine’s grounds and the Rosary Garden, reciting the mysteries of the rosary and singing hymns of praise.

The procession concludes with prayers of reparation and the Fatima prayer at the outdoor Chapel of Our Lady of Fatima on the Czestochowa grounds.

Father Pavone’s homily (listen to an audio file here) was a poignant reminder of God’s merciful love for sinners and Our Lady of Fatima’s motherly guidance.

“(God) knows that we need constant reminders and constant encouragement … and he knows we need a mother,” Father Pavone said.

He spoke of the darkness in the world and of sin, which blinds people to the light and joy of Christ.

The priest referred to the anniversary of the terrorist attacks of Sept. 11, 2001. 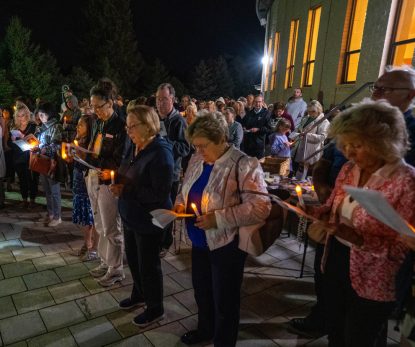 The faithful pray during a procession at Fatima Day Sept. 13 at the National Shrine of Our Lady of Czestochowa, Doylestown.

“What marks it as an evil is not simply the loss of life and property, but the blatant disregard that some people have for the right to life of other people,” he said. “And we see this not only in genocide, holocausts, and acts of terror, we see it also in abortion because it’s the same evil — that blatant disregard for the right to life, that blindness to the value of a human being.

“There is no moral difference just because the instruments of killing are different, or because the victims may be five feet tall — or five inches tall. The moral evil is the same. That blatant disregard for someone’s right to life. And Our Lady of Fatima leads us in the way, the path of life that the Lord reveals in his Gospel.”

Speaking of the procession that would follow the Mass, Father Pavone said, “We will go out of the walls of the church into the world … into the darkness outside. That’s a symbol, my friends, of our entire life, of our entire vocation — to go out, walking together as a community… marching in the same direction, following whom? Our Lady, because we’re following her Son.”

Fatima Day began a decade ago at the shrine with the opening of the outdoor Rosary Garden, which was created by the Pauline Fathers for processions and devotions on a regular basis. A few times a year guest priests are invited to be the main celebrant and homilist — past celebrants have included bishops, well-known priests, and local pastors from the Archdiocese of Philadelphia.

The main idea behind Fatima Day was to answer Mary’s call to pray the rosary for peace in the world and to unite different nationalities together in prayer at the shrine. The event typically draws a couple hundred people each month, with people from many different nationalities attending and praying the decades of the rosary in their own languages, including Filipinos, Haitians, Vietnamese, Poles and Hispanics.

In September visitors prayed the prayers for the indulgence offered in honor of the recent coronation of the image of Our Lady of Czestochowa, which Pope Francis has granted under the usual conditions. The plenary indulgence is available to all pilgrims who visit the shrine from May to October. Learn more at the shrine’s website. 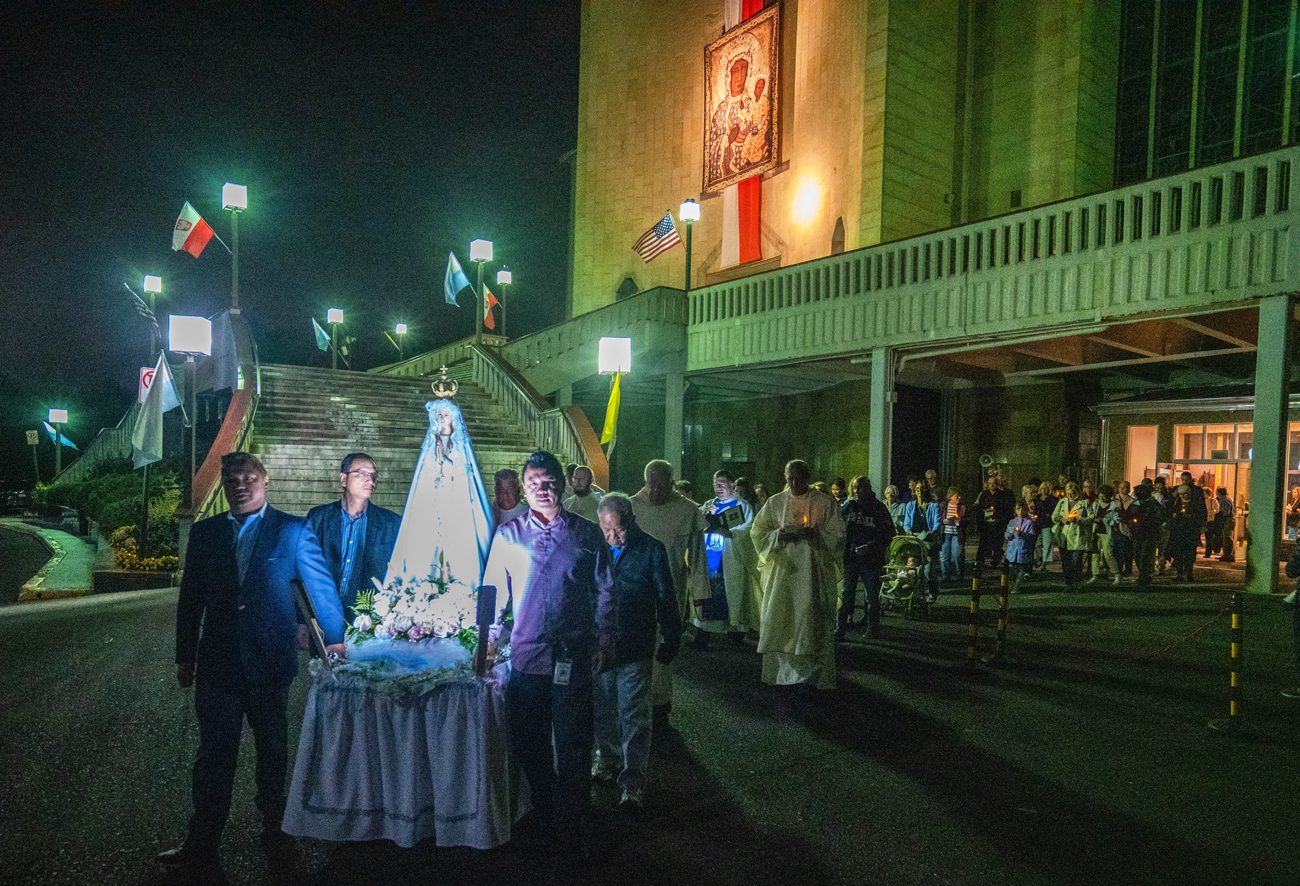 NEXT: Parish finds its own identity helping others gain theirs