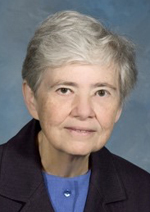 Sister Helen ministered in the Archdioceses of Philadelphia and Washington.

She is the sister of Arthur Burke and the late Richard Burke. She is also survived by nieces, nephews and members of her congregation, the Sisters of St. Joseph.

The funeral Mass was celebrated Sept. 11 at St. Joseph Villa, attended by religious, relatives and friends.