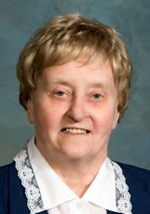 The daughter of the late Heifler and Margaret Ruth, she attended Christ Our King Grade School and Padua Academy High School in Wilmington, Delaware.

In September 1962 she entered the Sisters of St. Joseph, Chestnut Hill, and professed her final vows in 1970.

Sister Patricia ministered in the Archdiocese of Philadelphia and the Diocese of Wilmington.

She is the sister of Robert Ruth (Linda) and the late George Ruth. She is also survived by nephews, a grandniece, grandnephews and the members of her Congregation, the Sisters of St. Joseph.

The funeral Mass was celebrated Sept. 16 at St. Joseph Villa, attended by religious, relatives and friends.