Sister Anna Fitzpatrick dies at 97, was nun for 77 years 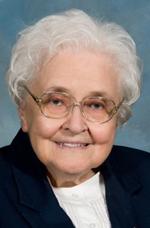 The daughter of the late Edward and Mary Fitzpatrick, she attended St. Columba Grade School and John W. Hallahan High School in Philadelphia.

Sister Anna ministered in the archdioceses of Philadelphia and Newark, and the Diocese of Allentown.

The funeral Mass was celebrated Oct. 21 at St. Joseph Villa, attended by religious, relatives and friends.