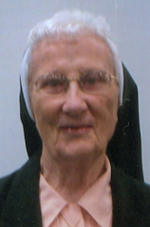 Sister Marie John Holland, O.S.F., died Oct. 18 in Assisi House, Aston, at age 91. She had been a professed member of the Sisters of St. Francis of Philadelphia for 67 years.

Sister Marie John (formerly Marion Rita Holland) was born in Tremont, Pa. Prior to her entrance into the congregation in 1950, she graduated from Cherry Township High School in Mildred, Pa., and was a member of Cathedral Parish in Philadelphia. She earned a BS degree in social studies from Villanova University.

During the past 20 years she worked at Hallahan High School where she served as copy room facilitator and coordinator of the service program as well as overseeing the school store.

Sister Marie John taught for 22 years in the Diocese of Allentown, including at St. Mauritius School in Ashland and St. Francis of Assisi School in Allentown. She also served as principal at Holy Child School in Bethlehem.

She also taught for 10 years in the Diocese of Trenton at St. Michael Orphanage in Hopewell and St. Anthony School in Trenton. In the Diocese of Camden Sister Marie John taught at St. Nicholas School in Egg Harbor.

Earlier this year she moved to Assisi House, the congregation’s retirement in Aston, where she served in prayer and hospitality ministry.

The funeral was celebrated Oct. 22 in Assisi House, followed by burial in Our Lady of Angels Cemetery.

Sister Marie John is survived by her cousins and by her Franciscan family. Donations in her name can be made to the Sisters of St. Francis Foundation, 609 S. Convent Road, Aston, PA 19014.

PREVIOUS: Sister Anna Fitzpatrick dies at 97, was nun for 77 years