Four quarters later, Bonner-Prendergast had accumulated an astounding 353 yards on the ground en route to a 46-7 victory over visiting Conwell-Egan. The Friars improved to 5-1 overall, 3-1 in the Catholic League Blue Division.

“Every week as an offensive line, (assistant coach John Wagner) likes to talk to us about having an agreement mindset, and that’s something every week we really have started to established together,” said junior left guard Anthony Cinaglia, a three-year starter. “Our execution gets better every game, and in this one, we came out knowing what’s happened the last few years and wanted to take control of them physically.”

When the game was over, Bonner-Prendergast had run the ball 29 times and averaged a surreal 12.2 yards per carry. 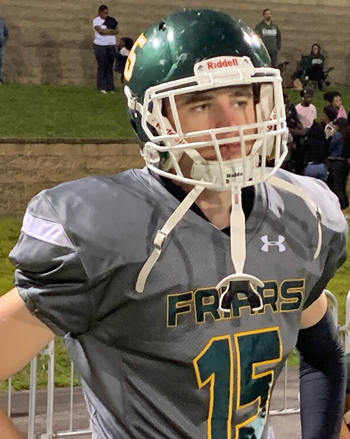 “When I see that, I know as a unit we’re doing our job,” said Cinaglia, who shares line duty with senior left tackle Chile Adele, sophomore center Nick Bozzetto, junior right guard Devon Harris, and junior right tackle Brian Freind. “I also see that what we do in practice for preparation is playing a huge part, especially in calling the types of run plays we run.”

The Friars were coming off a 40–14 win over visiting Lansdale Catholic. The B-P offense was more traditionally balanced, with Peterson rushing for a career-high 160 yards and a touchdown while junior quarterback Kyle Lazer completed 11 of 15 passes for 128 yards and four touchdowns.

“The offense is clicking,” said Welde. “Against Lansdale it was the pass game, and against Conwell-Egan, it was the run game. It’ll be fun to see how we match up against Carroll’s defense.”

Carroll’s defense might consider this upcoming challenge against Bonner-Prendergast anything but fun.