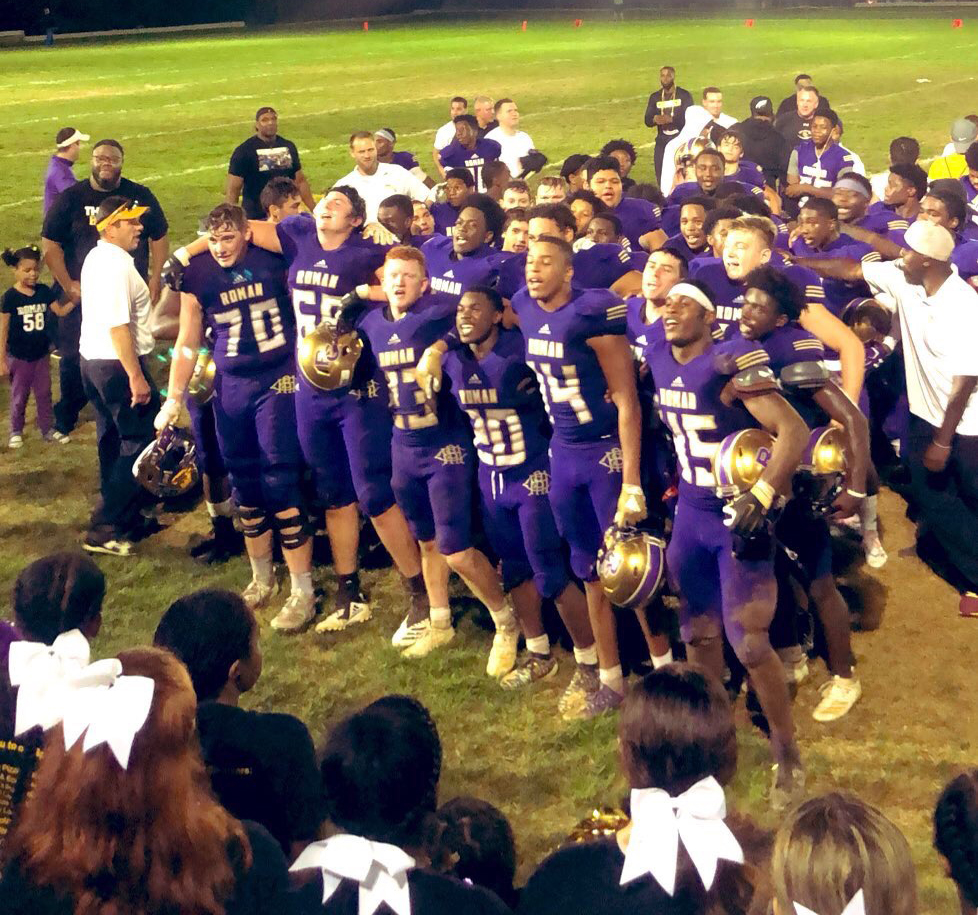 The celebration was understandable. When few prognosticators don’t extend even a remote chance of winning, and then you go and prove them all wrong, it’s open sesame for gloating and demanding a few apologies.

“I think the performance speaks volumes to the work our young men and coaching staff have put forth this entire year,” said first-year coach Rick Prete. “I think a win like that one gives our seniors a lot to be proud about, and our younger guys something to hang their hat on and build from.”

While the defense harassed Wood’s quarterback and backfield, holding the Vikings to a miserly 147 yards from scrimmage, Roman’s quarterback-receiver connection of junior Jayden Pope to senior Malachi Harris connected for three touchdowns.

It marked the second time the duo have hooked up for a trio, having accomplished the rare feat in a season-opening, 47-46 win over St. John Paul II.

“We stopped the run and made them pass,” said Harris, also a standout defensive back. “Then we shut the pass down, too. Everyone on defense had a great game.”

Harris finished with five catches for 108 yards while Pope completed 12 of 21 passes for 145 yards. Junior Daquan Robinson, starting in place of junior Shemar Ellis (32 carries for 138 yards and a touchdown in a win over Chester High eight days earlier), rushed for 76 yards on 17 carries.

The Cahillites appreciated the Roman faithful that remained boisterous throughout the two-plus hours that complemented a picture-perfect Saturday evening.

“Yesterday’s crowd was the biggest I’ve seen in all four of my years at Roman,” said Harris, who had missed the previous game with a concussion. “They were great. The atmosphere was unreal.

“The win was very important. It let everybody know that Roman Catholic football is back. It was the beginning of something great.”

Prete was asked to describe the magnitude of the triumph.

“To win a game against such a great program with excellent players and coaches at Archbishop Wood, and for them to accomplish such a feat on a night where we are honoring our 1999 team, makes it even more special,” said referring to the Roman team that captured the Catholic League title 20 years ago.

“However, this win does not signify satisfaction and will make us work even harder, because our young men are experiencing what winning a big game feels like. Lastly, we’d like to thank the school staff and administration for all of their support. “