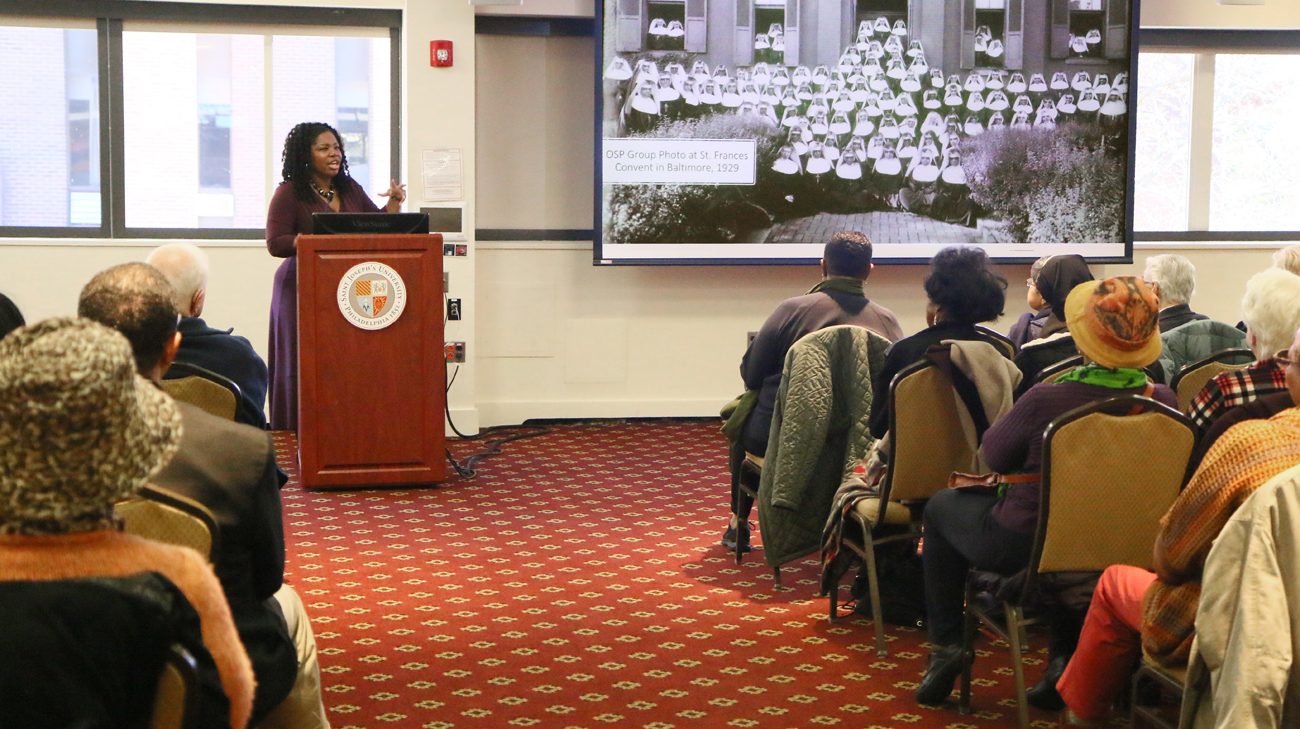 Shannen Dee Williams speaks to a group Nov. 16 at St. Joseph’s University documenting her research on racism against African American religious sisters, in an event sponsored by the Archdiocese of Philadelphia’s Office for Black Catholics. (Photo by Sarah Webb)

One need not look to Hollywood to find the authentic “Sister Act” narrative. This was part of the message of Villanova University history professor Shannen Dee Williams when she delivered the lecture, “The Real Sister Act: Confronting the Uneasy History of Racial Segregation and Exclusion in U.S. Female Religious Life” at St. Joseph’s University’s Doyle Banquet Hall on Saturday, Nov. 16.

The event was hosted by the Archdiocese of Philadelphia’s Office for Black Catholics as part of its Black Catholic History Month presentations.

Williams presented portions of her extensive research through archives and first-person interviews with African American religious sisters who had experienced discrimination and prejudice in their ministries.

One could hear a pin drop among the audience consisting of many sisters, some priests and lay persons as some of the most riveting stories were being told.

Among those who were seated in the front row of the auditorium was Veronica Hodges, a member of St. Malachy Parish in the heart of North Philadelphia. She is a fifth generation Catholic from an African American family. As a cradle Catholic, she said she grew up hearing many of the stories Williams presented behind closed doors.

“I just wanted to thank you so much for this strong presentation,” Hodges said during the question and answer session that followed the lecture. “As a fifth generation Catholic you validated what I felt and heard about the sisters growing up in St. Thomas Aquinas Church in the early 1950s. You just set the record (straight). I just want to thank you.”

In an exclusive interview with Hodges after the program she further said that it was important to tell the real story. During the lecture, Williams explained that unlike the “Sister Act” movies where the main character was posing as nun, the story she was telling was of the courageous commitment of authentic African American religious sisters.

“I think this was the best discourse and research on this topic that I’ve ever heard,” Hodges told CatholicPhilly.com. “Many times when these stories are told the real issues about race are not (described). It is often superficial. That is why I think it is good to examine what happened.

“Part of knowing our faith is bringing out the racism that has happened. This is not a recent issue and some things are still going on. I think Professor Williams took a deep dive into the history of racism in the convents. I am glad she exposed the whole story because few have really examined it,” Hodges said. 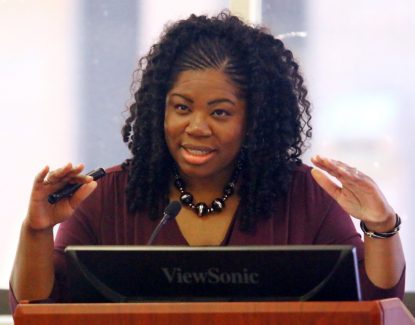 Among the sensitive topics discussed was whether St. Katharine Drexel was racist against African Americans. In her PowerPoint presentation Williams pointed out that during her diligent research into the historical archives she found this to be the case after going through transcripts and letters, and her extensive interviews with many of the elders who lived during St. Katharine’s time.

Williams also cited the congregation’s 1893 vote to exclude African Americans and Native Americans which was chiefly driven by anti-black racism — not any request from the orders of black religious sisters.

Williams further said that the saint initially only had a commitment to ministering to Native Americans.

Shortly before establishing the Sisters of the Blessed Sacrament, a spiritual director encouraged St. Katharine to expand her mission to African Americans, which she did. Williams cited St. Katharine’s biographers and the late renowned scholar, Benedictine Father Cyprian Davis and his book “The History of Black Catholics,” who noted that this was the case.

Floretta Caudle, a lifelong Catholic, said this portion of Williams’ research and presentation brought relief. “For me, you clarified things about St. Katharine Drexel that we heard, was whispered about and maybe gossiped about by making it a statement of fact,” Caudle said. “This is part of the history.”

In response, Williams said she traced the sisters’ contributions dating back to the early 19th century and before. She said that the Sisters of the Holy Family, founded in New Orleans in 1836, opened the first Catholic nursing home. It was there that the African American sisters who were teachers were sometimes not permitted to teach Black children, but ironically could be assigned to teach their white counterparts.

Some sisters later went on to acquire teaching certificates and degrees through historically black colleges when this was later required of classroom teachers.

Williams culminated her talk with an explanation from her perspective on why African Americans, including those who were religious sisters, remained in the Catholic faith. She said they took a higher, more universal perspective of their faith.

When racist incidents broke out locally or nationally were not dealt with by American Catholic authorities but the sisters often found positive support from the Vatican. Williams said that African American Catholics found “by bypassing the American hierarchy” and going to Rome that their voices could be heard and some issues were resolved.

Father Owens said he hoped the events’ participants would “share this chapter of history with their family, friends and fellow parishioners. Dr. Shannon Williams must be commended for her superb research and scholarship.” 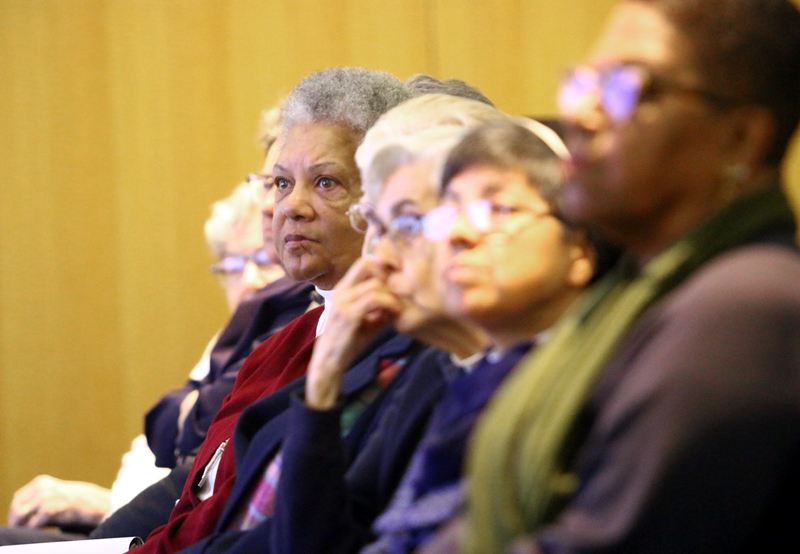