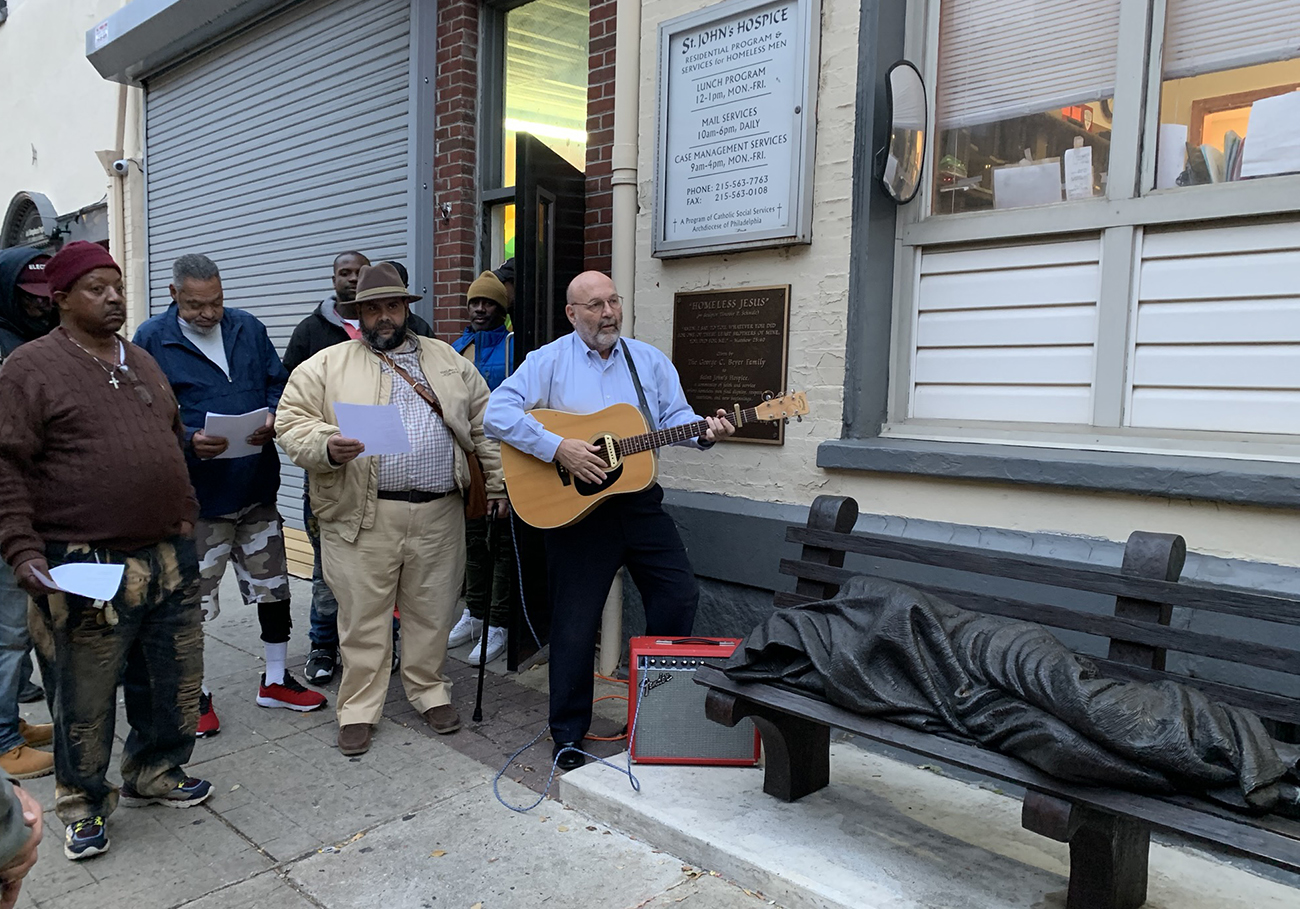 Barry Martin (with guitar) leads the Good Shepherd Singers during a Nov. 18 prayer service marking the third annual World Day of the Poor. The gathering took place before the statue of Homeless Jesus at St. John’s Hospice, an archdiocesan ministry that annually serves hundreds of men experiencing homelessness. (Photo by Gina Christian)

Some 60 clients and supporters of an archdiocesan Catholic Social Services (CSS) ministry to the homeless marked the third annual World Day of the Poor before a renowned image of an impoverished Christ.

The life-size bronze sculpture, which was installed outside of the hospice in 2017, depicts a blanketed Christ lying on a park bench, with the crucifixion wounds visible on his bare feet. Created by Canadian artist Timothy P. Schmalz and commissioned by the George C. Beyer Family, the image has been replicated in more than 50 cities worldwide, including the Vatican.

Standing at the statue’s feet, Bishop Deliman said that the image “reminds us of so much poverty in a country of so much wealth.” He added that “Jesus very clearly identified with the poor” and “would expect us to do the same” in fulfilling “the mission of the Church.”

Bishop Deliman’s words echoed those of Pope Francis, who instituted the World Day of the Poor in 2017 as an occasion to reflect on how poverty is at the heart of the Gospel. In his inaugural message for the observance, which takes place on the Thirty-third Sunday in Ordinary Time, Pope Francis said that the occasion was designed “to encourage believers to react against a culture of discard and waste.”

In addition, Pope Francis stressed the need to recall that “the poor are not a problem” but rather “a resource from which to draw as we strive to accept and practice … the essence of the Gospel.”

(Related: Watch the video from the World Day of the Poor prayer service at St. John’s Hospice.)

For this year’s observance (celebrated on Sunday, Nov. 17), Pope Francis drew on Psalm 9:19, “the hope of the poor will not perish forever.” Decrying profound global economic inequality, exploitative labor practices and anti-immigrant policies, Pope Francis warned in his message that “’the day of the Lord,’ as described by the prophets … will destroy the barriers created between nations and replace the arrogance of the few with the solidarity of the many.”

Pope Francis also urged the faithful to regard the disadvantaged as “persons to be encountered” who “save us because they enable us to encounter the face of Jesus Christ.”

Led by Bishop Deliman, participants at the Nov. 18 service recited the Our Father, which has been described by Pope Francis as “the prayer of the poor … said in the plural,” since “the bread for which we ask is ‘ours,’ and that entails sharing, participation and joint responsibility.”

At the conclusion of the gathering, the Good Shepherd Singers performed “We Shall Overcome,” an African-American hymn that has long been an anthem for social justice causes worldwide. The choral group consisted of current and former residents of CSS’s Good Shepherd Program, a residential outreach (and Catholic Charities Appeal beneficiary) offering housing and social services to medically fragile men experiencing homelessness.

Following the musical performance, attendees headed into the hospice for an evening meal, as Bishop Deliman encouraged them to “go in and get out of the cold.”

NEXT: Long-whispered racism endured by nuns revealed by researcher