Parishes, schools honor veterans on holiday, and year round 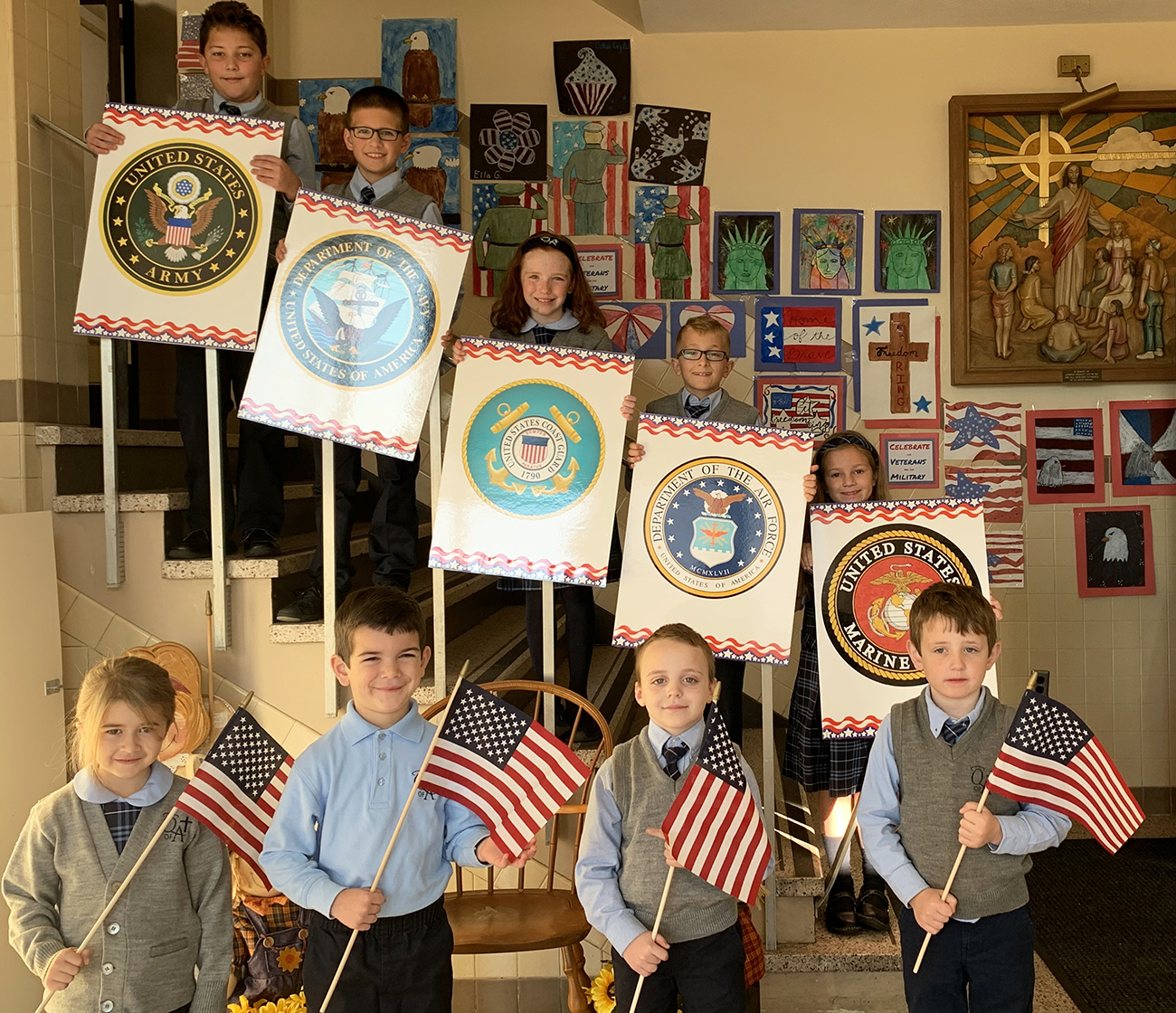 Students from Queen of Angels Regional Catholic School in Willow Grove display patriotic artwork they created in advance of a Nov. 8 Mass and reception honoring local veterans. The celebration is one of several commemorations of Veterans Day planned by Archdiocese of Philadelphia schools and parishes. (Courtesy of Kimberly O’Doherty / Queen of Angels Regional Catholic School)

Those who have served their country are being remembered this Veterans Day in parishes and schools throughout the Archdiocese of Philadelphia, while receiving year-round support through prayer and social outreach.

Students from Queen of Angels Regional Catholic School in Willow Grove will honor veterans with a Mass and reception on Friday, Nov. 8. The liturgy’s main celebrant, Oblate Father James MacNew, is a retired U.S. Navy commander who now serves as director of campus ministry at Holy Family University. State Rep. Thomas Murt, a U.S. military veteran and longtime supporter of the school, will also be in attendance.

Prior to the Mass, veterans and active military personnel will walk with their children and student relatives in procession, joined by members of the local V.F.W. (Veterans of Foreign Wars) and American Legion posts. Following holy Communion, the students will sing the military hymn of each branch of the armed forces.

The gathering is a first for the school, which has customarily sent greeting cards to veterans. To deepen students’ appreciation for veterans’ service, kindergarten teacher Patricia Crossley teamed up with Immaculate Heart of Mary Sister Mary Chapman, the school’s principal, who drew on her pastoral experiences in Virginia Beach, home to a number of military personnel and their families.

(Related: Watch the video of the livestreamed Mass for veterans at Queen of Angels Regional Catholic School.)

Queen of Angels Catholic School, located in Willow Grove (Montgomery County), observed #VeteransDay with a Mass and Reception focused on appreciation for those who have served in the United States Armed Forces. Veterans and active military personnel walked with their children in a procession preceding the Mass. Additionally, the school had invited members of the local VFW and American Legion posts to join them.Students also sang traditional songs associated with each branch of the United States Armed Forces to honor the day’s special guests. #FridayFeeling #EquippingSaints #ExploreAOPS #FridayThoughts

Posted by Archdiocese of Philadelphia Schools – AOPS on Friday, November 8, 2019

“It is important to instill in our students a love of God and a love of country,” said Crossley. “We are so blessed to be living in a land in which we are free, and it is important for our children to realize that these freedoms are due to the men and women who serve in our armed forces.”

St. William Parish in Northeast Philadelphia will continue its “Veterans Mass” tradition with a Sunday, Nov. 10 liturgy that will include honor guards from the Crest-Lawn American Legion Post 382 and the Michael J. Crescenz M.O.H. Rising Sun V.F.W. Post 2819.

At St. Isidore Parish in Quakertown, veterans and active duty personnel are regularly remembered in prayer. For well over a decade, a small group of parishioners has been meeting each month to offer a rosary for members of the armed forces, particularly those who have recently been deployed. To encourage additional prayers, the parish places portraits of deployed service members on a chair before the sanctuary at Mass, and “retires” the chair once personnel have returned home.

Kathy Walters, who has led the St. Isidore prayer group for the past 10 years, said that the initiatives offer family members solace.

“People who have had children deployed need a sounding board,” she said. “It helps to be around others who have been through it.”

After the 11 a.m. Mass on Sunday, Nov. 10, a Japanese cherry tree planted on St. Isidore’s grounds in honor of veterans will be blessed. The tree is the second donated by the parish women’s club; the first was installed in memory of a military specialist killed while detonating a bomb. 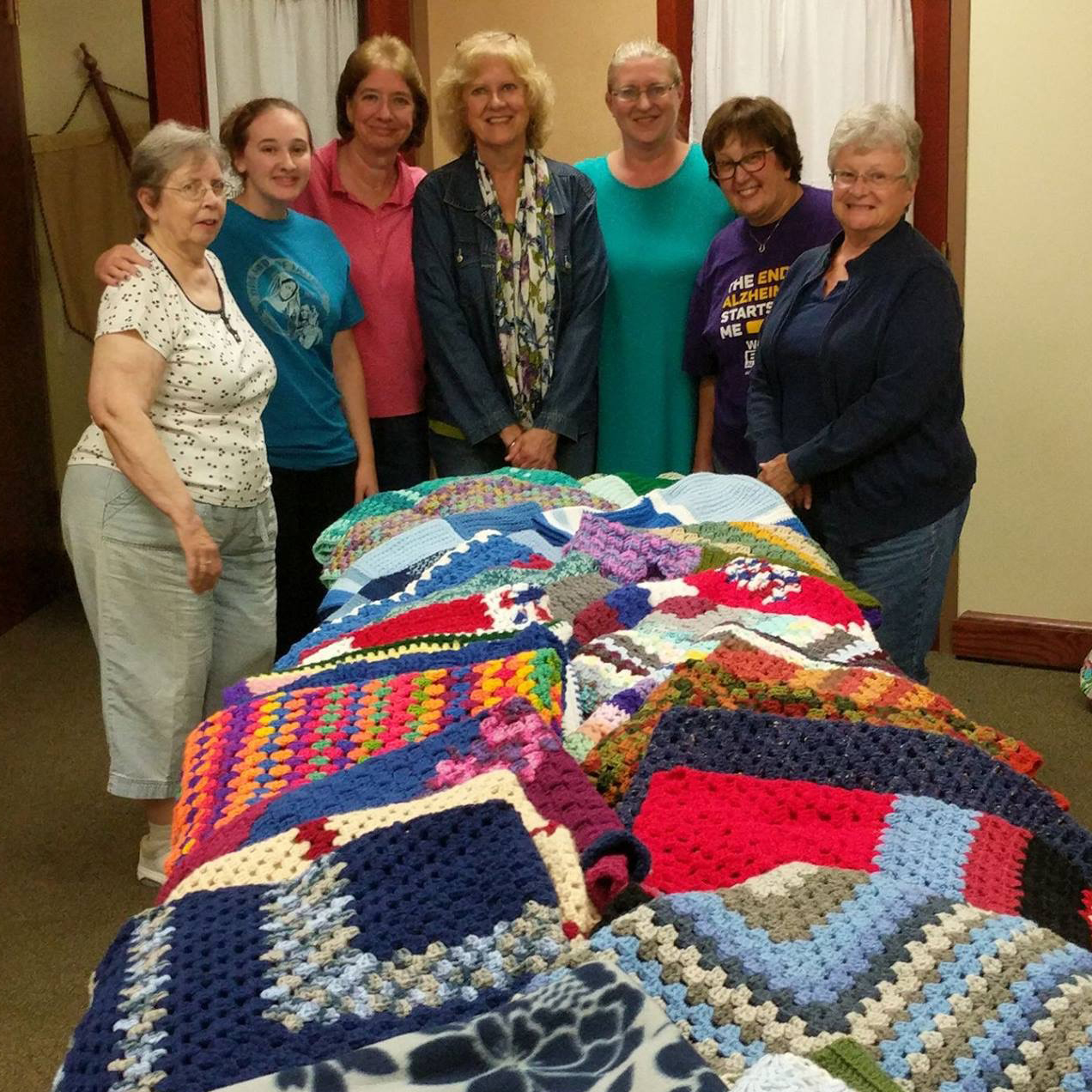 Members of a prayer shawl ministry at St. Isidore Parish in Quakertown display several of their creations, some 100 of which are donated annually to area veterans. (Photo courtesy of Deb Duke)

Since January 2016, a number of St. Isidore parishioners have annually provided some 100 handmade lap shawls for retired area veterans. Deb Duke, a Navy veteran who leads the ministry, said that the 39-inch square blankets (a mix of knitted and crocheted pieces) are beloved by their recipients, many of whom are in wheelchairs.

“They use them so much that they wear out,” said Duke, adding that she and her fellow stitchers “absolutely love” crafting the shawls.

At the archdiocesan level, Catholic Social Services (CSS) has long worked to address the needs of veterans, many of whom struggle with post-traumatic stress disorder, homelessness and addiction.

“They need that sense of community,” Martin said. “When they have it, they do much better.”

Martin noted that his office recently assisted a veteran who, after 10 years of sobriety and steady employment, had relapsed into addiction. The Good Shepherd Program was able to connect the gentleman with an array of veteran benefits, and to reawaken his self-initiative.

“He quickly became a leader among his peers, and a significant role model,” said Martin, adding that the veteran quickly secured his own housing and furniture. “He went from entering this program as a homeless veteran to leaving it for a beautifully furnished apartment in less than four and a half months.” 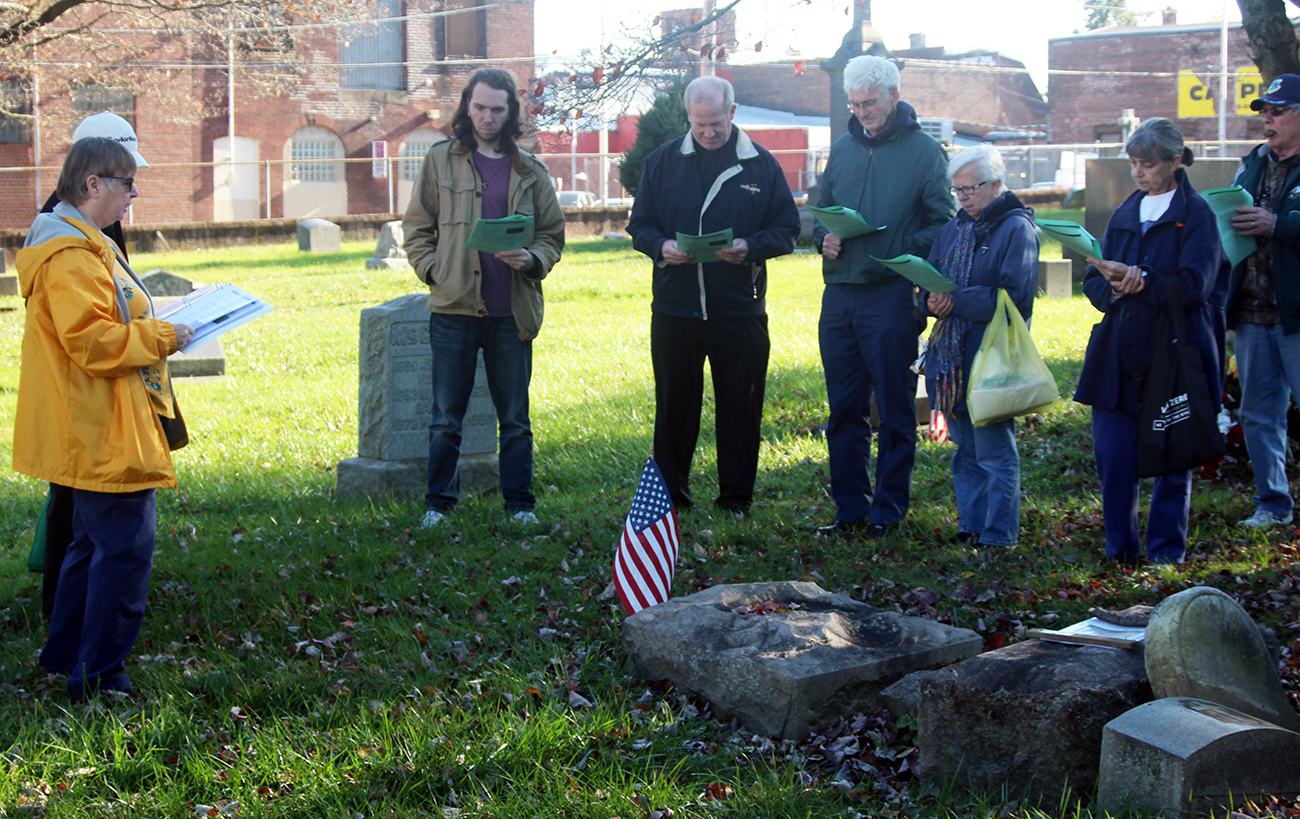 In addition to offering prayer and social support, area faithful are working to honor the graves of veterans. Walters said St. Isidore parishioners assist local veteran groups with placing 1,800 American flags on plots in area cemeteries, which are displayed from Memorial Day through Veterans Day.

On Nov. 2, the Friends of St. Joachim Cemetery in Philadelphia presented a tour of the historic graveyard (now part of Holy Innocents Parish), highlighting veterans from the Civil War, the First and Second World Wars, and the Vietnam War.

Joseph and Maureen Taylor, who led the cemetery tour, drew on extensive research in recounting details of the veterans’ lives for the event’s two dozen attendees. Charles Durney, an Irish immigrant who fought for the Union, was captured shortly after the Battle of Gettysburg and narrowly survived a bout of rheumatism while in a Confederate prison. Joseph Coyle died of pneumonia in France, just days before the end of World War I. Andrew Krull was killed in action during World War II in the Philippines, while Edward McClain, who served as a Marine in Vietnam, died in 1981.

(Related: Listen to a podcast with Religious Sister of Mercy Dolores Liptak on Catholic nuns who served as nurses during the Civil War.)

Joseph Taylor, who along with Maureen organizes regular volunteer efforts to maintain St. Joachim Cemetery, said it’s important to recall that the armed forces are ultimately made up of unique individuals.

Pointing to the graves behind him, Taylor said, “Every soldier has a story.”

NEXT: New senior center reminds older adults ‘they’re worth it’