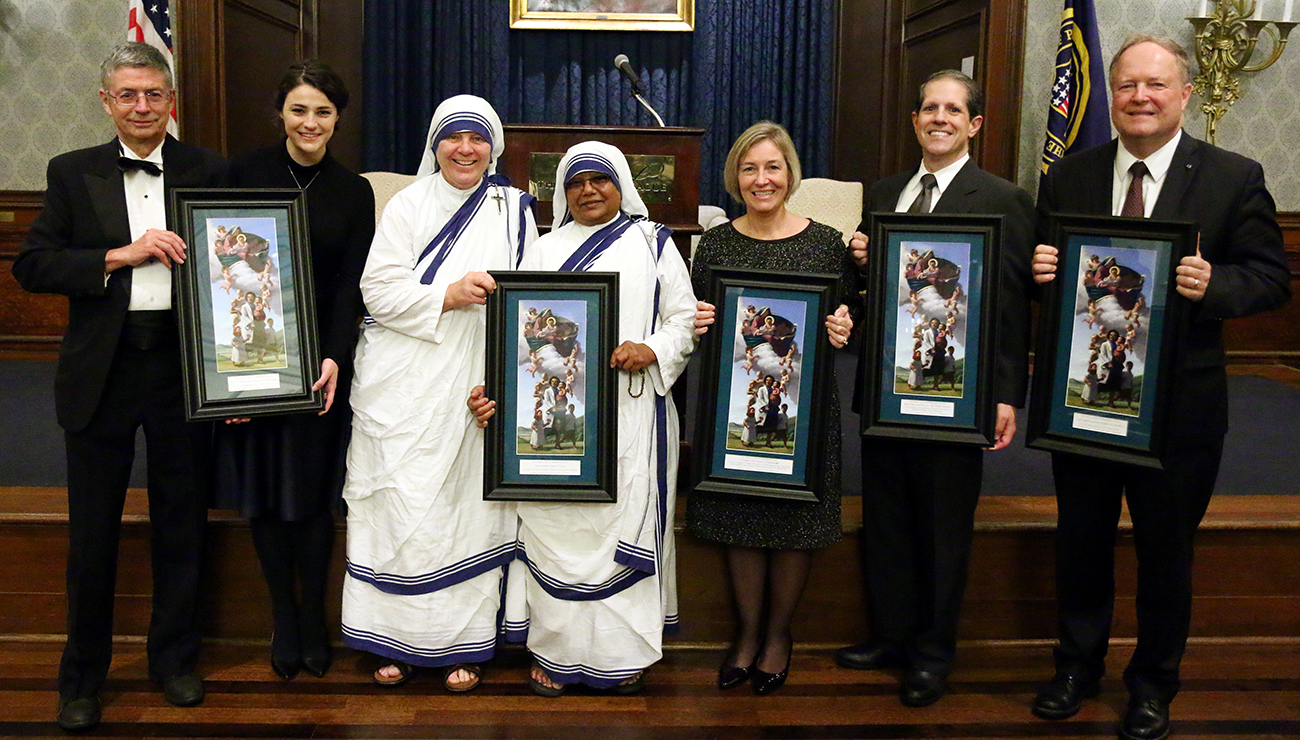 Award recipients at the Oct. 22, 2019 gala for the Gianna Center of Philadelphia, held at the city’s Union League, included (from left) Dr. Arthur Barnaby and Devin Barnaby, who received a memorial award in the name of the late Dr. Gloria “Lori” Barnaby; Missionary Sisters of Charity Kironmoyi and Marie Theresa; Liz Parrish of the Friends of FertilityCare; Alain Oliver, executive director of the Love and Fidelity Network; and Michael O’Connor, Supreme Secretary of the Knights of Columbus. (Sarah Webb)

The Gianna Center of Philadelphia celebrated its first year of operation at Suburban Community Hospital in East Norriton with an Oct. 22 gala at the Union League attended by some 200 supporters.

Founded in 2009 and based in northern New Jersey, the national center takes its name from St. Gianna Beretta Molla, the 20th-century Italian pediatrician canonized by St. John Paul II for her heroic commitment to the unborn. When a uterine fibroma developed during her fourth pregnancy, Molla instructed physicians to save her child’s life, even at the expense of her own. After a successful delivery via Caesarean section, Molla died of septic peritonitis.

At the Oct. 22 gala, Philadelphia Gianna Center president and executive director Dr. Max Mercado outlined the risks and negative consequences of identifying women’s health care with easy access to contraception. In his remarks, Dr. Mercado drew on personal narrative as well as the history of women’s medicine in the United States, including his native Puerto Rico.

Montgomery County Commissioner Joseph Gale introduced Knights of Columbus Supreme Secretary Michael O’Connor, who received an award recognizing the Knights’ defense of the right to life, highlighted by a recent initiative to donate over 1,000 ultrasound machines to women’s health centers nationwide, among them Philadelphia’s Gianna Center. The machines will assist staff in counseling abortion-vulnerable women, while facilitating the follicular ultrasound imaging necessary for the center’s infertility treatment program.

The Missionary Sisters of Charity were honored by the Gianna Center’s Dr. Delia Larrauri, who has partnered with the religious order in its outreach to Norristown’s immigrant community. The congregation has worked to enhance local awareness of the Gianna Center’s services, which are available all women regardless of insurance status or ability to pay.

Among the students present at the event were representatives from several area medical schools including the University of Pennsylvania, Drexel University, Temple University, Jefferson University and the Philadelphia College of Osteopathic Medicine. The Gianna Centers work with such students to provide clinical practicum opportunities that do not conflict with pro-life principles.

Drexel medical student Devin Barnaby and her father, Dr. Arthur Barnaby, accepted an award on behalf of mother and wife Dr. Gloria “Lori” Bittner Barnaby, a lifelong advocate for Catholic-informed women’s health care. Prior to her death from breast cancer, Dr. Barnaby had asked for memorial gifts to be made to the fledgling Gianna Center of Philadelphia.

Seminarians from St. Charles Borromeo Seminary in Wynnewood were also among the gala’s attendees. For the past 11 years, FertilityCare practitioner Liz Parrish has given presentations to third-year seminarians on the Gianna Center’s approach to women’s health care, in order to prepare them for pastoral outreach.

Parrish also accepted a Gianna Center award from colleague Barbara Rose, who was named FertilityCare Practitioner of the year by the American Academy of Fertility Care Professionals in 2011.

A number of area leaders from local Catholic youth and young adult organizations were also on hand, among them Anthem, the Archdiocese of Philadelphia’s youth ministry; Generation Life; and the Culture Project. Former Love and Fidelity Network (LFN) executive director Caitlin LaRuffa introduced her successor, Alain Oliver, who also serves as the CEO of the group’s parent organization, the College Cultural Foundation. Through the LFN program, the Princeton-based foundation works on college campuses throughout the country to promote a pro-life understanding of marriage, family and human sexuality.

For more information about the Gianna Center of Philadelphia, visit www.phgiannacenter.org.

NEXT: Parishes, schools honor veterans on holiday, and year round