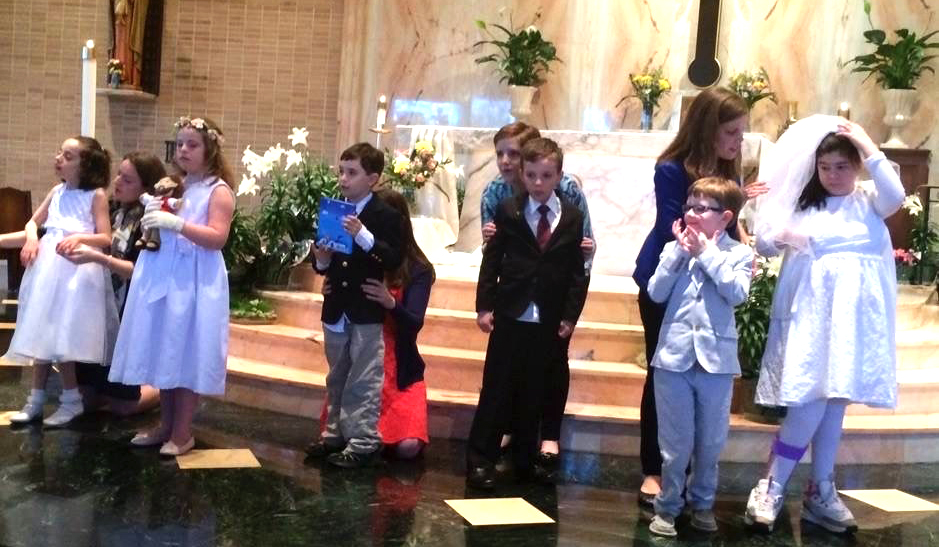 Children are welcome at most churches, even if some members insist the kids sit up straight, don’t fidget, don’t talk, don’t annoy the people around them or heaven forbid, disrupt the preacher. Those elders might forget what Jesus said in Matthew 19:13: “Let the children come to me, and do not prevent them.”

Children are not just those who are young in chronological age but also those who, because of intellectual disabilities, are eternal children.

What does your parish do for them, other than direct them to a crying room if the church has one? Does it go that extra mile to accommodate those with visual or hearing impairment or mobility issues, and embrace them as full and valued members of the congregation?

Some parishes do all of this better than others. One local parish that gets an A-plus for inclusiveness is St. John Chrysostom in Wallingford. Under the leadership of its pastor, Father Edward Hallinan, people with special needs are welcome at all Masses and there are two monthly Masses with ASL (American Sign Language) and a special monthly Mass of Welcoming and Inclusiveness for all disabilities, just to emphasize the point.

As a matter of fact St. John’s was the only Catholic church among 11 Christian churches chosen to participate in a study conducted by Dr. Erin Rafferty and a group of her graduate students at Princeton Theological Seminary examining pastoral care for persons with disabilities, which will result in a published book.

Rafferty is also an ordained Presbyterian minister whose only child, Lucia, has multiple special needs, and she herself has been  studying the issue of ministry to people with disabilities for years, including three years in China concentrating on foster care for special-needs children in that country.

“Churches are stronger and more effective as members of the Body of Christ if they have persons with disabilities in them,” Rafferty said. 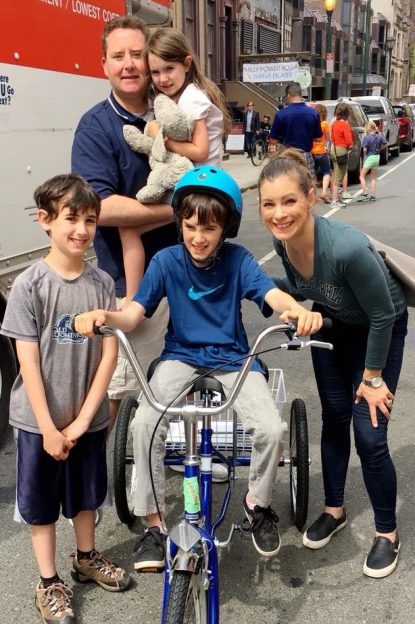 The McGowan family of St. John Chrysostom Parish in Wallingford enjoys a day out together, including (at rear) Dave and daughter Cara, along with (at front) sons Cieran and Chris with their mom, Joanna.

She believes everyone, including those attending churches, is getting better at this because now most children with disabilities are not segregated solely in special schools but mainstreamed. Through inclusive education those with disabilities, especially mental disabilities, are not as isolated in society and the rest of society is more aware of their needs.

With that said, “while many churches are working to minister to people with disabilities, there are still so many ways people don’t notice how our able-bodied culture doesn’t make space for them,” Rafferty said.

One area most of society doesn’t consider when speaking of disabilities is the aged, an increasingly large segment of the population.

“This is going to be a challenge because the boomers are such a large population,” Rafferty said. “It is going to require more and more people to care for them.”

St. John’s Parish, she said, “was awesome. We were thrilled to meet so many people and all of their families who shared so openly with us their experience. Both the staff and the priests there have been so incredibly involved in sharing with the people what they have.”

Beth Brady is not a territorial member of St. John Chrysostom but because her son Michael has intellectual disabilities she could not go to Mass at her own parish. “It broke my heart,” she said. “We wanted to go to church as a family.” 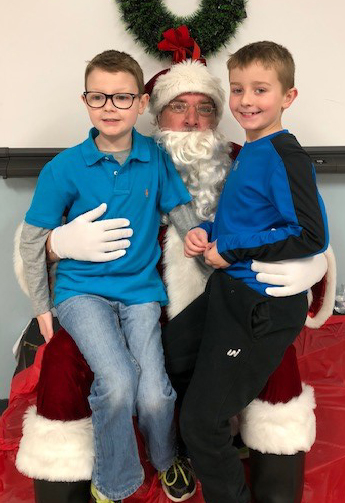 A friend told her about St. John’s, and it’s not just the monthly inclusion Mass, it’s every Sunday Mass. She remembers a recent Mass when Michael took the hand of an elderly woman in the pew behind them. “She hugged him and held his hand for about 20 minutes.”

Father Hallinan, she said, “is the reason why St. John’s is wonderful. He says, ‘I’m not doing anything special. This is what we should be doing.’”

Brady knows many families who are coming to St. John’s because of the inclusiveness.

“I have one friend who stopped going to church because her own parish would not let her son receive Communion,” she said. “Another friend who was turned away at two parishes because of her disabled daughter’s activity is now going to St. John Chrysostom.”

But there are other disabilities besides intellectual disabilities. For example Lisa O’Malley is blind and is not a territorial member of St. John’s. She joined because of its inclusiveness and is now a lector.

“If you open up ministries to people, they are willing to accept them,” she said. As a lector, she is provided with audio versions of the Scripture readings and she transcribes them into Braille, which she reads at the Mass. 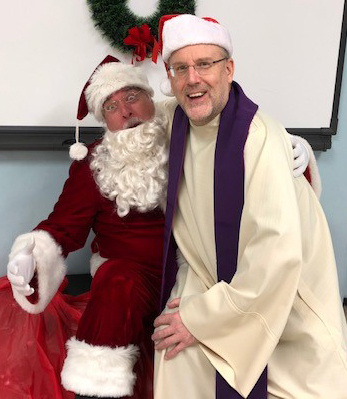 “It is fantastic,” she said. “Joining this parish is one of the best things I ever did.”

Not all of the special needs children are at the Sunday Mass. A small group is attending PREP under the direction of Terrie Maisano, the lead catechist for adaptive PREP while their parents attend Mass. Widowed at the young age of 23, she started teaching regular PREP when her own son was in second grade.

As time went on Maisano recognized there was an unfulfilled need for specialized PREP for children with learning disabilities so she went back to school and earned her degree in special education.

At this time she has nine children in the program including those who are preparing for their sacraments.

To those who say, “Why bother, they don’t understand what you are teaching?” she replies, “You don’t know that.” 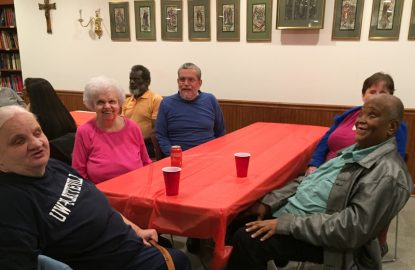 Guests enjoy the Dinner with Friends event in October at St. John Chrysostom Parish in Wallingford, hosted by the parish’s Ministry for Persons with Disabilities. The evening of dinner and music, held several times a year, mostly includes people from the surrounding area in Delaware County, and all are welcome.

She recalls one little boy who was virtually nonverbal. She and the other teachers were shocked when one time she asked a question, he didn’t speak, but wrote out the correct answer.

Maisano is thrilled when parents tell her their child is blessing himself or herself and praying at home.

“I know that this is all for the love of Jesus and we are there for them,” she said.

The family of Joanna McGowan sometimes could not go to Mass because of outbursts by her eldest child Christopher, who is now 12. When she heard about the Mass of Welcoming and Inclusiveness she and her husband decided to go and see.

“Father Hallinan was wonderful,” she said. “He wasn’t just meeting an obligation, he was saying, ‘Tell us what you need. He was saying, “Thank you for bringing your children.’ This has been a good experience for us to be part of the church community. The attitude is everybody is welcome, and it’s a good thing for the entire Church.” 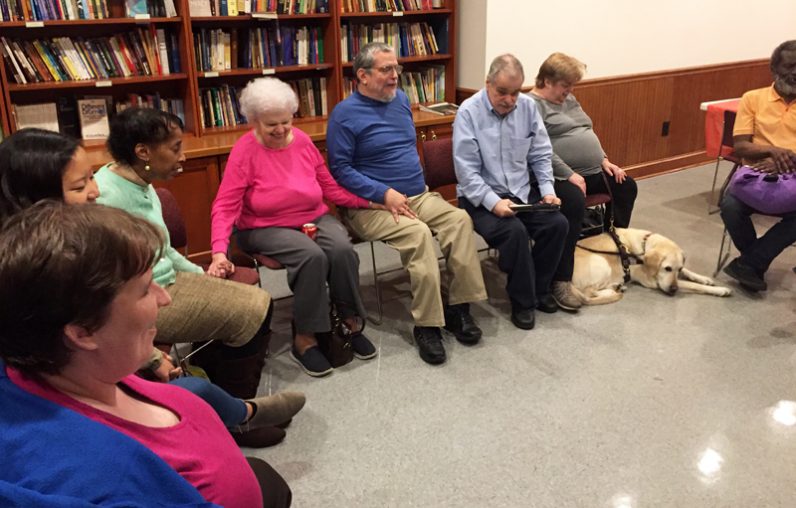 St. John Chrysostom Parish in Wallingford hosts a Dinner with Friends event several times a year, sponsored by the parish’s Ministry for Persons with Disabilities. The evening of dinner and music mostly includes people from the surrounding area in Delaware County, and all are welcome. Shown at the most recent such gathering in October is one of the event’s organizers, Lisa O’Malley, at left.

NEXT: Gianna Center of Philadelphia celebrates anniversary with gala