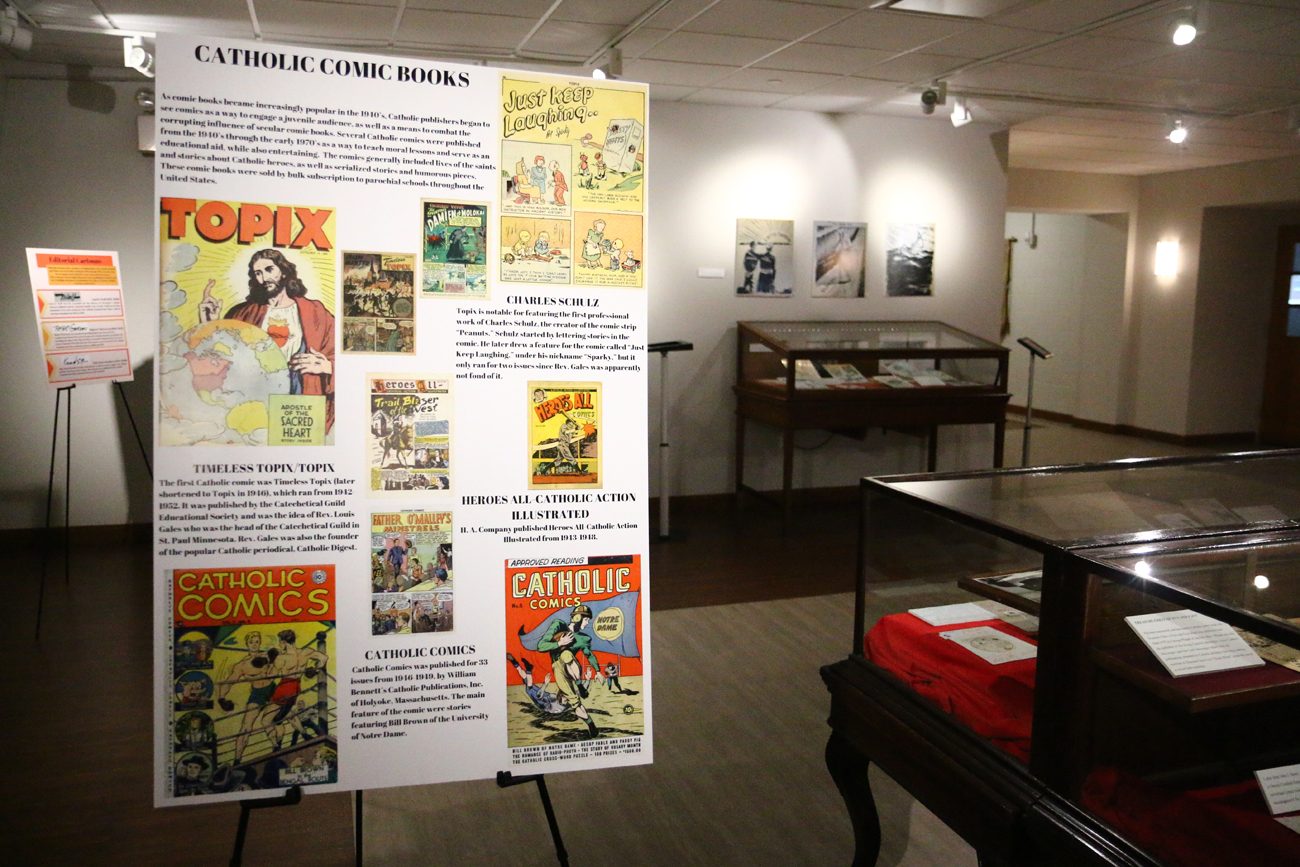 A exhibit at the Catholic Historical Research Center in Northeast Philadelphia presents the history of Catholic cartoons in America, running until October 2020. (Photo by Sarah Webb)

If you happen to be in Northeast Philadelphia with a bit of time to spare, check out the Catholic Historical Research Center, located in the school building of the now closed Our Lady of Ransom Parish, 6740 Roosevelt Boulevard.

While the CHRC contains the official records of the Archdiocese of Philadelphia and the papers of most of its past bishops, it is also a must visit for anyone doing research on parishes, schools and institutions in the archdiocese. But not everything is official documents. In a way it is also a museum.

Right now and for about a year it has a special exhibit, “Cartooning Catholics,” deftly curated by assistant archivist Patrick Shank.

While Shank considers it a fun project, the cartoons he has assembled show how others viewed the Catholic Church and how the church used this usually lighthearted medium to get its message across.

The oldest items are a series of single-panel cartoons similar to what one sees in a daily newspaper executed by Thomas Nast, the father of American cartooning in the 1870s for Harper’s Weekly, a now defunct political Journal that was published in that era.

Nast was undeniably a trailblazing cartoonist, but as shown through these works, he was also a bigot in his presentation of Catholicism. 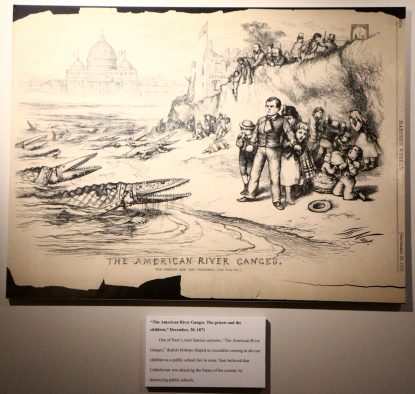 An illustration on display at the Catholic Historical Research Center by cartoonist Thomas Nast in the 1870s shows American fears of Catholics and prevalent anti-Catholic prejudice. (Sarah Webb)

Among his favorite topics was how the Catholic Church was seeking to destroy public education. One panel shows crocodiles as bishops coming ashore to attack innocent school children. Another shows a wolf with the insignia of the pope trying to force his way into a school filled with terrified children.

Nast himself was a lapsed Catholic born in Germany. It may not be a coincidence that during the 1870s, the decade when he was drawing these cartoons, his native Germany under the administration of its Chancellor Otto von Bismarck, in what was known as the Kulturkampf, executed a series of anti-Catholic laws.

Prominent on this agenda was the exclusion of the Catholic Church from education. But while Nast’s bias may be a product of his home country, this also speaks to the bias in the America of that period in that a generally respected magazine would find it acceptable to print such slander.

Other cartoons in the exhibit are upbeat, with a number drawn from the pages of Philadelphia’s former Catholic newspaper, The Catholic Standard and Times, and other sources that promoted the Catholic faith.

Among these are cartoons by Bil Keene, from his syndicated single-panel circular comic, “Family Circus.”

Keene, who was Philadelphia-born in St. William Parish, drew his first cartoons while a student at Northeast Catholic High School for Boys. He continued on as a cartoonist at the Philadelphia Evening Bulletin and became nationally known through “Family Circus.” And while he settled in Arizona, he never forgot his roots.

Although the cartoon is not Catholic per se, it does reflect Keene’s Catholic values. While not among those in the CHRC exhibit, occasionally in pictures of the children’s bedroom one could see the “NC” pennant of his alma mater on the wall.

With Keene’s permission, The Catholic Standard and Times printed the “Family Circus” cartoons free of charge. 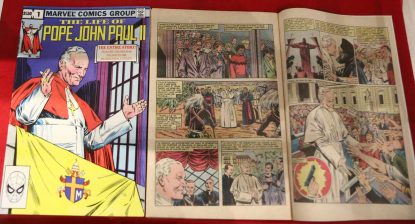 A 1982 comic book not only touts St. John Paul II, but also documents the attempt on his life. (Sarah Webb)

Another notable Philadelphia Catholic artist represented in the exhibit is Robert McGovern, whose works go well beyond cartooning to fine art.

There too in the exhibit are Catholic comic books from the golden age of that genre in the 1930s and 1940s. These included simple stories with a moral, lives of Catholic heroes and saints, and toward the end a bit of anti-communist story lines.

While printed material is the bread and butter of the CHRC, over the years it has also accumulated other materials. Recently acquired from the Sisters of the Blessed Sacrament are artifacts connected with St. Katharine Drexel, tracing from her childhood to old age.

The oldest item in the collection is the sea chest of the first known Catholic to settle in Philadelphia. Archives are great places; you never know what you will find.

If you wish to visit the Catholic Historical Research Center it is open on weekdays but it is best to call ahead at 215-904-8149. Learn more at the website chrc-phila.org. 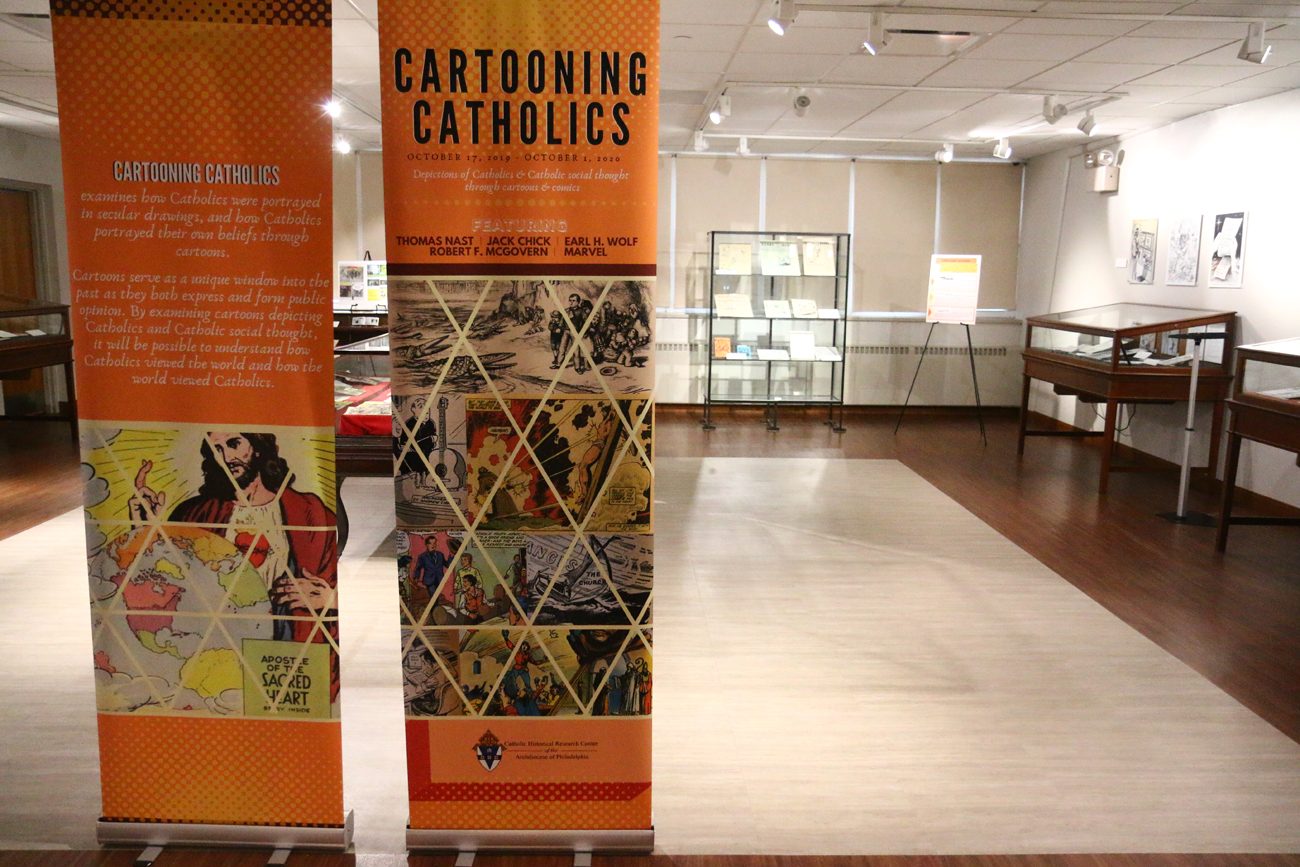 The Catholic Historical Research Center is located in the school building of the former Our Lady of Ransom Parish, 6740 Roosevelt Boulevard, Philadelphia. (Sarah Webb)

NEXT: Students spread the good news through original artwork