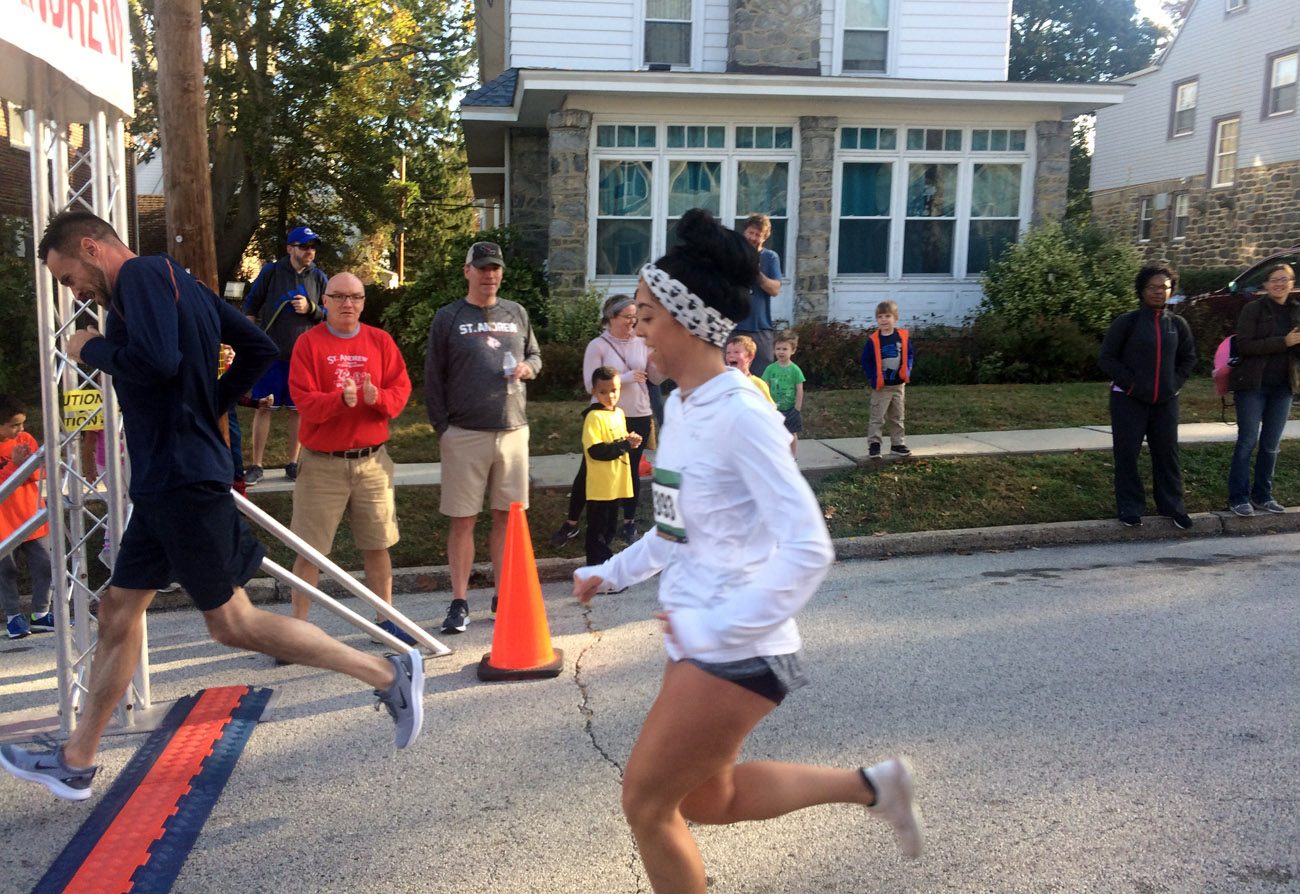 A fall tradition, now a decade running, at St. Andrew Parish in Drexel Hill continued on Saturday, Oct. 26 as the Delaware County parish launched its 10th annual 5K Spirit Run and Walk. In addition to the run and one-mile walk, the day also included a kid’s race so there were activities for everyone regardless of age.

The event was dedicated to the memory of former St. Andrew’s teacher Ray Ewing, who passed away in 2010, and his nieces Isabella and Kacy Ewing placed second and third in the 14-19 age group of runners.

“We do it with our family,” said Isabella Ewing. “It’s fun.”

While the goal each year is to raise $10,000 — making it one of St. Andrew’s largest annual fundraisers — this year the Spirit Run topped $12,000. Proceeds will go to St. Andrew School and will be used to upgrade the building in many areas including technology.

School principal Helen McLean gratefully accepted the check from Owen Quigley, a member of the committee of 15 that coordinates the many aspects of running the event. That work includes bringing sponsors on board and promoting the event throughout the community.

“We rely on a lot of teamwork that is needed to pull it all together,” said Quigley. 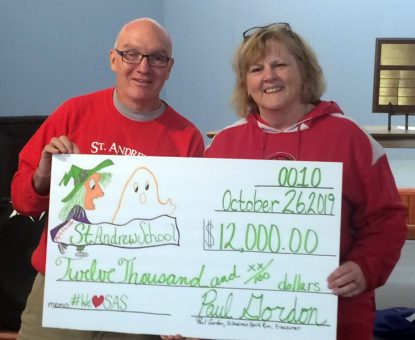 He described some of the diverse ways the event was promoted including through the church bulletins of local parishes, St. Andrew’s annual stewardship publication, social media and word of mouth. Because part of the race goes through Arlington Cemetery on State Road, a banner there advertises the race for passersby.

RuntheDay.com, which coordinated details of the race including official timing and other support, also spread word of the Spirit Run beyond Drexel Hill and its neighboring towns.

“It’s always been a strong presence in Drexel Hill,” said Upper Darby Mayor Tom Micozzie, a lifelong resident of the township, who fired the ceremonial gun to begin the run. “It’s also bringing together other people in the community. We end up being more cohesive.”

The kid’s race began at 8:30 a.m. and Gabriel Cuffey, a former St. Andrew student, finished first in 6:12. This was his third year of participating and he came along with his parents, sister and grandmother to make it a family affair.

“It feels nice,” said Cuffey. “It helps everyone bond together.”

(See a photo gallery of scenes from the race:)

Scenes from the 5K race at St. Andrew’s, Drexel Hill

Taking part for the first time were Vivian Tritton, a second grader at St. Andrew, and her sister, Willow, in pre-Kindergarten.

Prevailing as the overall winner in the 5K was Chris Pastore in 16:11, just two seconds shy of the all-time record. Pastore has taken part off and on during this 10-year tradition.

“We had great weather today,” he said. “I tried to keep a consistent distance.”

Jenna Rastatter, a sophomore at Drexel University and a member of Sacred Heart Parish in Havertown, was the first-place winner among women, coming in seventh overall. She comes out for the run almost every year and her time this year was 21:20. Her dad, Joe Rastatter, was also among the runners.

“It feels nice,” said Jenna Rastatter. “It was motivating. I knew I had to get moving.”

Three generations of the Huff and Robert families came out for the day. As Joe Huff ran the course, one of his biggest fans cheering him on was none other than his grandson, Timmy Robert. 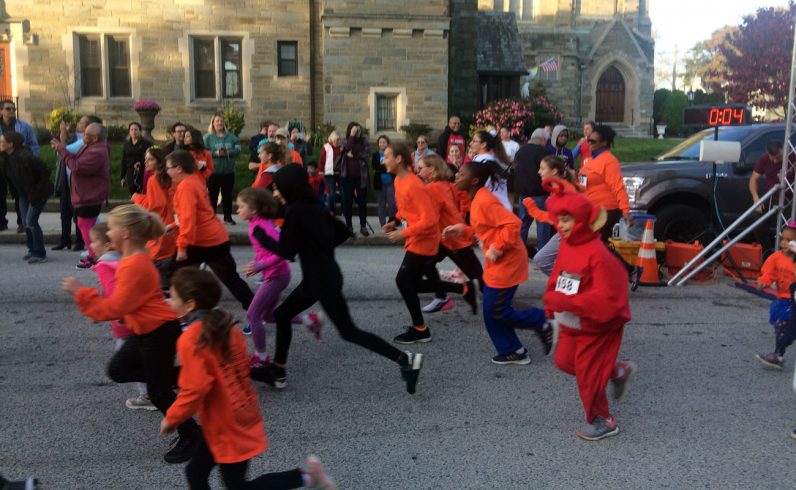 Children run past St. Andrew Church in a race just for them during the Spirit 5K Race Oct. 26 in Drexel Hill. (Dan McCarty)