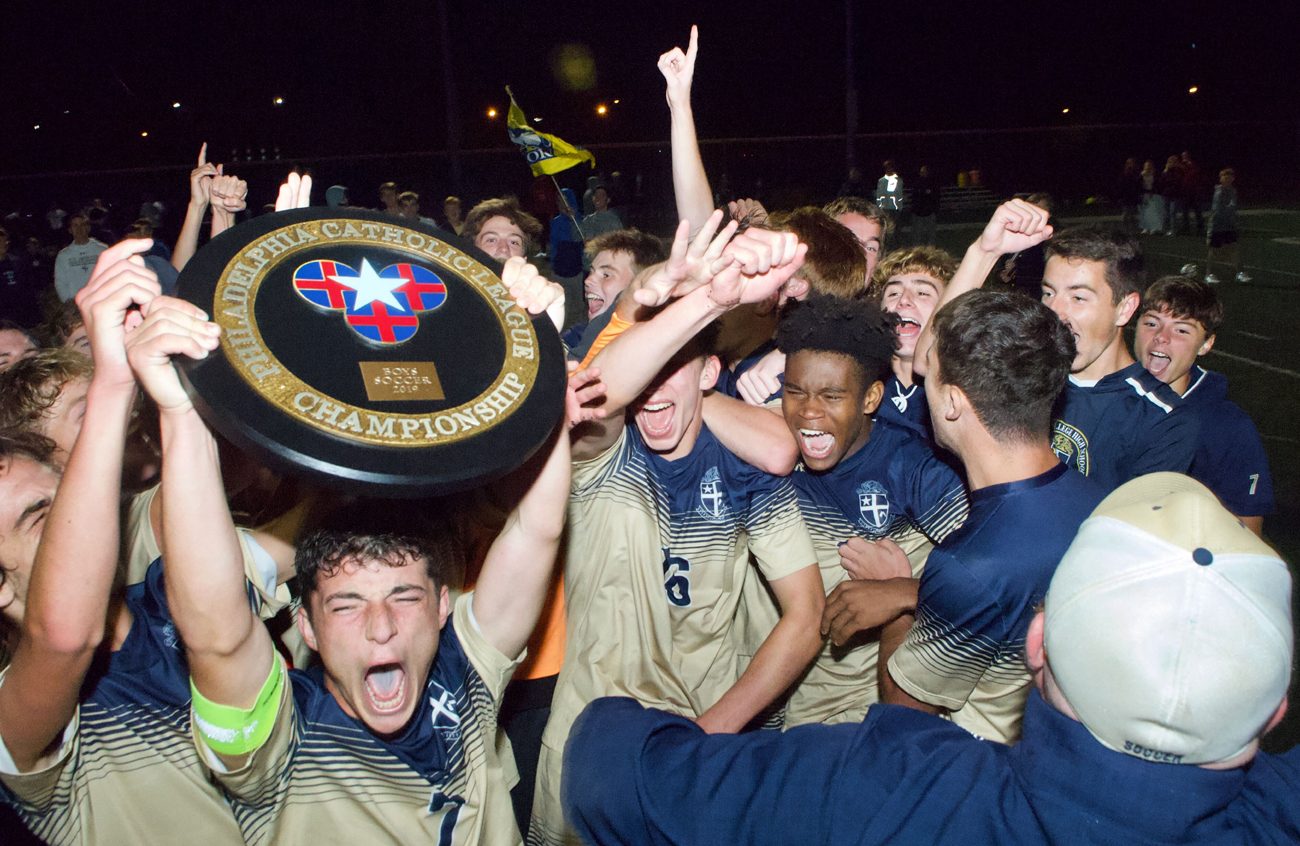 Jubilation explodes as La Salle prevails with its penalty kicks and defense for the Catholic League championship Oct. 26 at James Ramp Memorial Recreation Center in Philadelphia. (Photo by D'Mont Reese)

In what was supposed to be a rebuilding season with only three senior starters, La Salle High School’s boys’ soccer team ignored the prognosticators and kept improving.

“Everybody expected us not to be as strong as usual,” said La Salle senior Vito Leone. “A lot of people counted us out.”

Many may have counted the Explorers out during the championship, too.

In the second half, a goal by La Salle sophomore Hayden Grosso was answered when Roman senior Kieran Donnelly belted home a penalty kick. In sudden-death overtime, Roman, making its sixth straight trip to the league final, had multiple chances to win its second championship during that span and its first in five years.

The Cahillites came close, but in the oft-frustrating game of soccer, that doesn’t matter.

When the final seconds of the second overtime period had dissipated, both utterly fatigued squads retreated to their energetic sidelines to await the final challenge that would decide the champion.

Suffice it to say that while Roman’s players were frustrated, La Salle’s were relieved. It had nothing to do with the five penalty kicks that awaited both teams. It had everything to do with Roman’s dominance since the 20-minute mark of the first half. 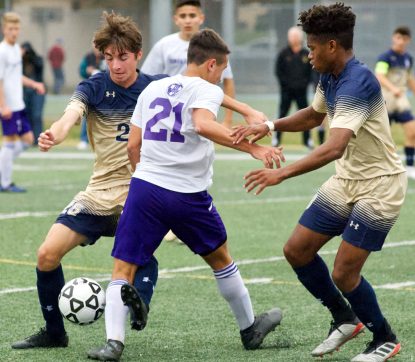 Outstanding defense throughout the game by both La Salle and Roman resulted in a 1-1 tie in regulation that remained deadlock through two overtime periods, with the outcome for the Catholic League boys’ soccer championship decided in penalty kicks. (Photo by D’Mont Reese)

In penalty kicks, La Salle switched goalies from senior Jack Heineman to senior Gavin McDade because the latter was stronger than the former in such circumstances.

“We know that Gav is a better PK player, so give him a shot,” said Heineman, a third-team All-Catholic. “He showed ya.”

While sophomore Sean Jennings, senior Jake Crawford and the aforementioned Grosso scored on three of La Salle’s four shots, Roman responded with a shot off the post, a goal by senior Sebastian Gonzalez, a low shot to the left that was hindered by a diving McDade and a blast that clanked off the crossbar before bouncing out of harm’s way. 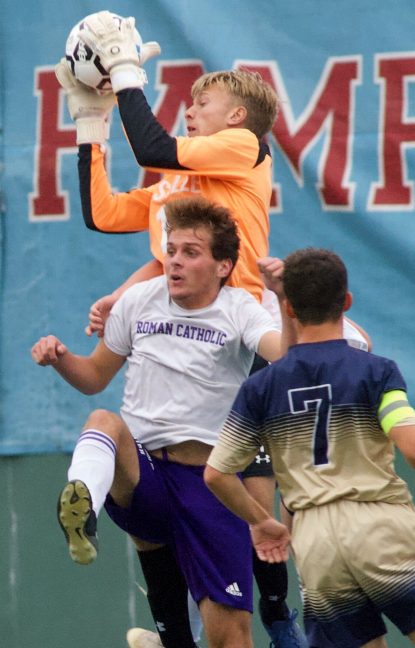 “It took a day or two for the guys and I to regroup, but we are OK now,” said Donnelly. “It was extremely frustrating performing so well and dominating the game and not coming away with a win. We were all shocked at the final whistle; we couldn’t believe it.

“With that said, that is the game of soccer. There are games where you can dominate, have possession, and still not win. I speak for the team when I say I wouldn’t have wanted to go out with any other group of guys, and we have made relationships in the past four years that are much more valuable than any plaque or trophy.”

Nothing more needs to be said. 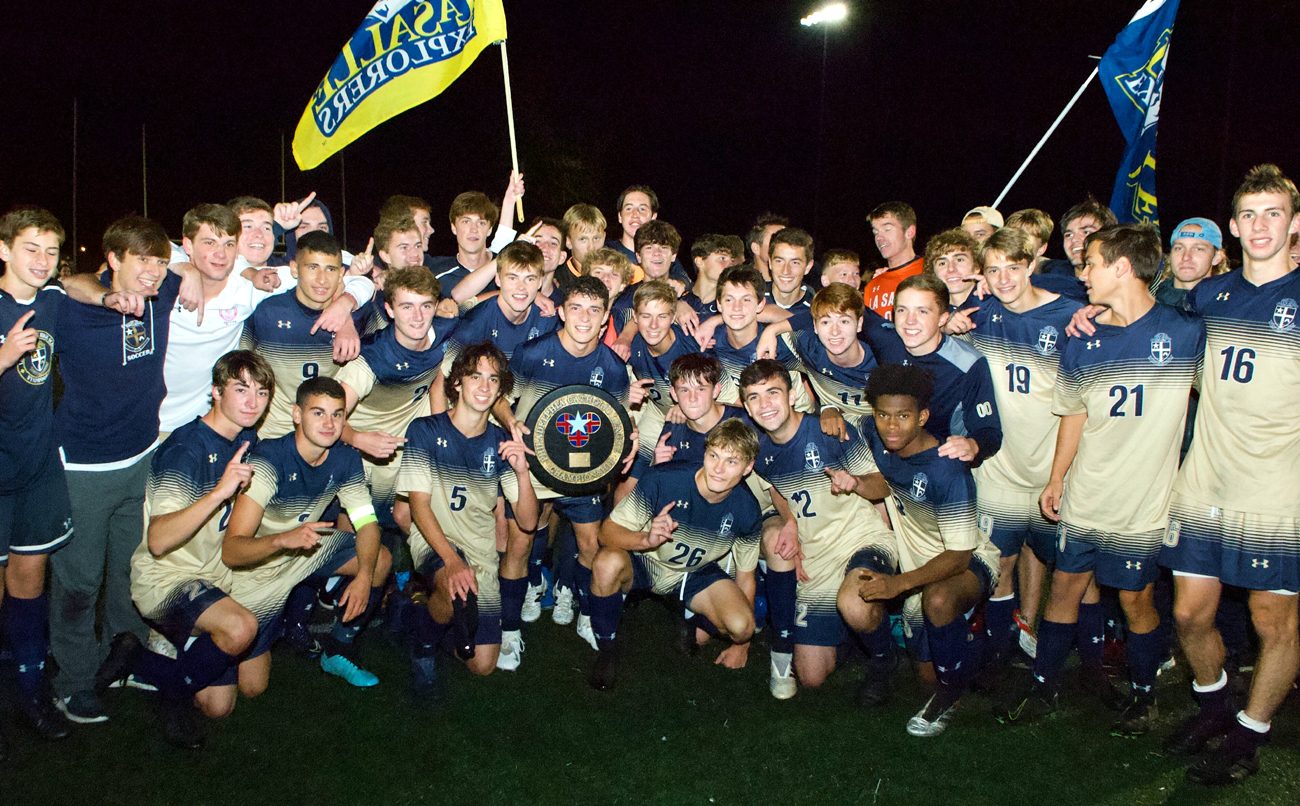 NEXT: All-Catholics named for fall sports