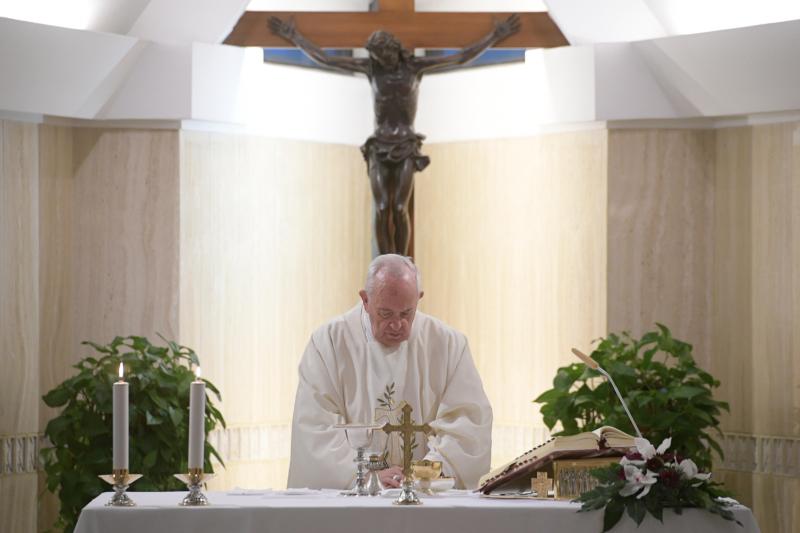 Pope Francis celebrates morning Mass in the chapel of his residence, the Domus Sanctae Marthae, at the Vatican Dec. 3, 2019. (CNS photo/Vatican Media)

VATICAN CITY (CNS) — God makes his presence known not by those who claim to have great faith but by those who are little and humble, Pope Francis said.

Priests, bishops and laypeople who “do not take on this path of littleness” will fall like the Christians of the past who “sought to impose themselves with force, greatness and by conquering,” the pope said in his homily Dec. 3 during morning Mass at Domus Sanctae Marthae.

Celebrating the memorial of St. Francis Xavier, co-founder of the Jesuits, the pope dressed in white vestments, which signify joy, innocence, purity and glory.

He reflected on the day’s Gospel reading in which Jesus praises God for having hidden his divine revelation from the wise and instead “revealed them to the childlike.”

Littleness, the pope said, is where “redemption, revelation, the presence of God in the world begins.”

“The great ones present themselves as powerful. Let us think about Jesus’ temptation in the desert, like Satan who presents himself as powerful, the lord of the whole world,” the pope said. “Instead, the things of God begin by sprouting from a small seed. And Jesus speaks of this littleness in the Gospel,” he said.

Christmas, he continued, also serves as a reminder of this since “we will all go to the creche where the littleness of God is” found.

True Christians “always starts from littleness” and in prayer, they “give thanks to God because we are little,” he said.

“If, in prayer, I feel little, with my limits, my sins, like that publican who prayed at the back of the church, ashamed: ‘Have mercy on me for I am a sinner,’ you will go forward. But if you think you are a good Christian, you will pray like that Pharisee who did not leave justified: ‘I give you thanks, God, because I am great,'” he said.

Pope Francis said his favorite sacrament to administer is the sacrament of confession, especially to children because “they tell you concrete facts.”

The concreteness of one who is small. ‘Lord, I am a sinner because I did this, this, this and this. This is my misery; this is my littleness. But send your spirit so that I will not be afraid of the big things, that I may not be afraid of you doing great things in my life,'” the pope said.

PREVIOUS: God invites us to enter into a divine dialogue

NEXT: Waiting well means having hope