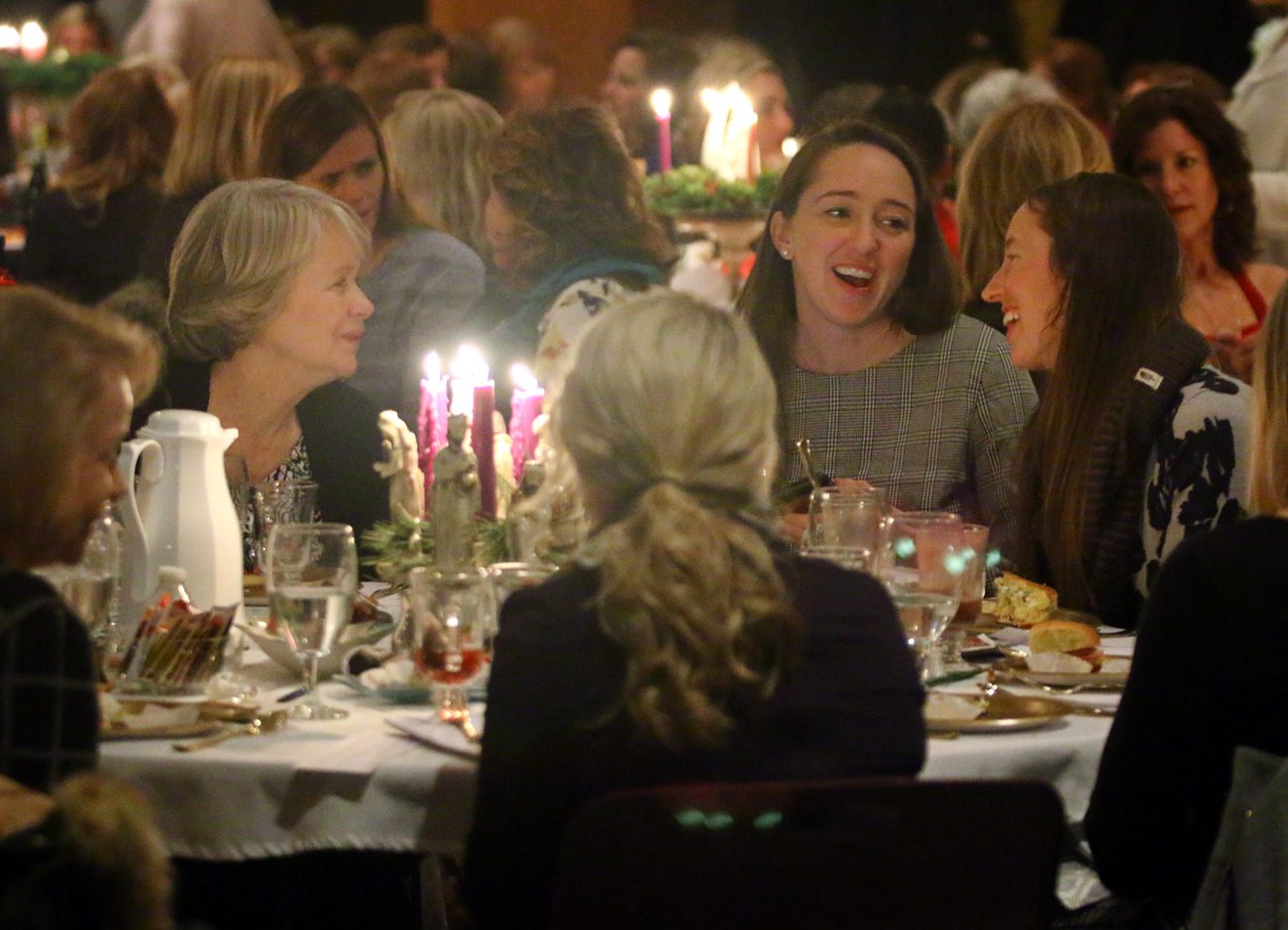 (See a photo gallery of the event in our Photo Features section.)

The program was started by women in the 1970s and is now celebrated by Christian churches around the world. It provides time for women to socialize, reflect and pray together before the Christmas rush begins. In an elegant atmosphere, lit only by candlelight, guests are served refreshments and invited by guest speakers to relax and focus on the meaning of the Advent season, a time of waiting and anticipation for the arrival of Jesus, our Savior.

“It’s a nice way to kick off the season and stay focused on what the season is all about,” said Holly Ippolito, a parishioner of St. Elizabeth.

“This event has grown and grown and grown,” said event coordinator Maria Fraser, who attended her first “Advent by Candlelight” event while living in Atlanta. After relocating to the Philadelphia area, she and friends have brought the event to St. Norbert Parish in Paoli, St. Isaac Jogues Parish in Wayne, as well as St. Elizabeth Parish.

St. Elizabeth has hosted this event for eight years, and Fraser began planning for this year’s event in July. 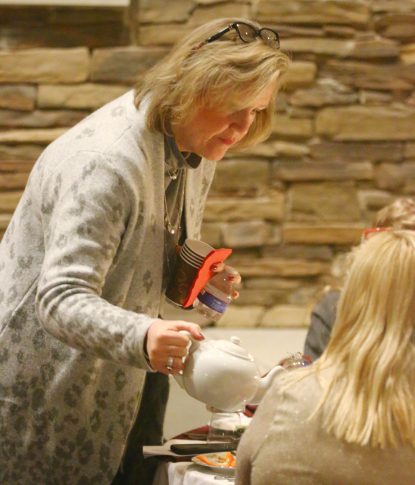 Kelly Myers pours tea for the other 10 women at her table. (Sarah Webb)

“I do a lot of praying and see what inspires me,” she said. “It’s beautiful how it’s a large event, but it breaks into small group discussions at each table, so you have a nucleus of about eight women. Everyone’s so happy to be here.”

“Advent is about waiting,” said Msgr. Thomas Mullin, pastor of St. Elizabeth Parish, who was the first speaker of the evening. “We’re waiting for the coming of Jesus. We wait in joyful hope.  That’s what we’re called to do in Advent.”

During this time of waiting, said Msgr. Mullin, “we’re supposed to open our hearts, our minds, and our lives to others.” He said some dimensions of our hearts are closed down due to life’s disappointments, but one should “pray for the grace to open your heart to others. Think about what would happen if we did this. What would happen in our homes, our parish, our country, and our world?  How would it transform our lives if we make room in our hearts, our daily lives, for others?”

Doctor Allison Shirker, a member of St. Elizabeth’s and an obstetrician and gynecologist in Phoenixville, spoke to the audience about her own faith journey.

Growing up in Ephrata, Pa., Shirker was raised in the Church of the Brethren, a Christian denomination that originated in Germany. She described her parents as “only practicing their faith on Sundays,” but she was inspired by her grandparents who “taught me what living for Jesus was all about.” She admitted she is now the only one in her family “who still goes to church.”

She met her Catholic husband, Andrew, while they were still both in grade school, and they were married more than 20 years ago by a Catholic priest at a Brethren church. After marriage, Shirker started asking questions about the Catholic faith, which led her to attending RCIA, converting to Catholicism and eventually becoming an active member of St. Elizabeth Parish. “We really built our marriage around our faith,” she said.

With some emotion, Shirker shared her lymphoma diagnosis in early 2017. She was working a 24-hour hospital shift in February 2017, and “didn’t feel right,” she said. An x-ray detected a mass. She completed her shift, delivering two more babies, and then she says, she “shifted from doctor to patient.”

The 10 days she waited for test results to determine the nature of the mass were “the hardest 10 days I had ever experienced. I wrote in my journal, ‘I don’t know how people without faith do this,’” Shirker said.

Her oncologist told her she had a lymphoma that was “aggressive, but curable,” and she started chemotherapy on Ash Wednesday of that year. 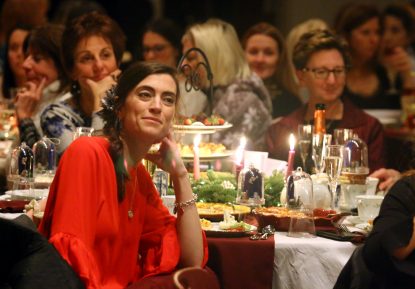 Women participate in an Advent evening of retreat just for them Nov. 4 at St. Elizabeth Parish, Chester Springs. (Sarah Webb)

“During this dark time of my life, I felt I was sitting in the palm of (Jesus’) hand. I saw the face of Jesus in so many people,” Shirker said. She described her husband wrapping his arms around her during a difficult period of her treatment and saying the rosary as she drifted off to sleep.  “We watched my cancer melt away, and now, two and a half years later, I’m here cancer free.”

Shirker related her story to the Nativity and how Joseph was “the unsung hero in the story,” much like her husband had been in her own story, she said. “(Joseph) nurtured that precious gift that would be a gift for the rest of us.

The Nativity story remains relevant to our lives today through “unexpected news, a journey, an unsung hero, friends that helped you, and the gift,” Shirker said. “I was blessed with remission, but the real gift was the journey with Jesus.”

Reflecting on the evening, Karen D’Ascenzo, a member of SS. Philip and James Parish in Exton, recognized that “everyone has struggles,” but everyone needs “to reach out to Jesus to give us strength.” 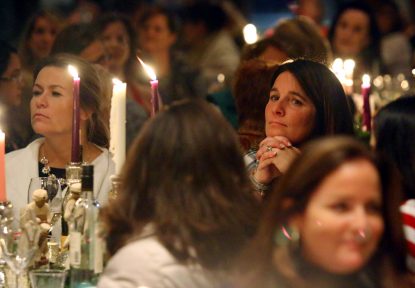 Tracey Parks and Melissa Hanold listen to the speakers at the Advent event for women. (Sarah Webb)

For her, Shirker’s story was “so intimate; that’s the part that really touched my heart the most,” D’Ascenzo said.

“We’re not alone in this,” added Kathy Daubney, also of SS. Philip and James Parish.

Fraser, the event coordinator, puts her trust in God. “Our lives are not easy, but if we do it with God, he’s got it, and our challenges become gifts,” she said. “Open up and expect the joy of the season.”

Meghan Lagergren, who recently joined St. Elizabeth Parish and was attending the event for the first time, is the mother of two children, ages 3 and 5. She found the evening retreat “was a good pause and time to reflect.”

“All the ladies at our table have kids under 10 years, so it’s easy to get caught up with gifts and Santa. This gave us the pause we need,” she said. 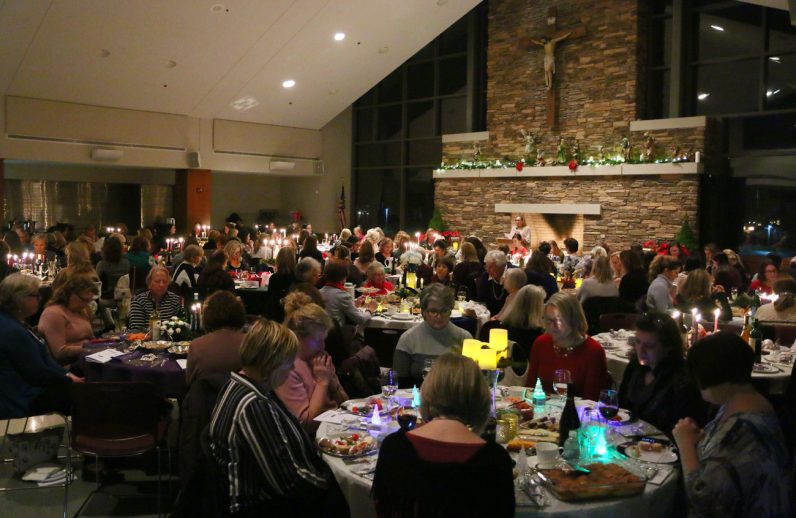