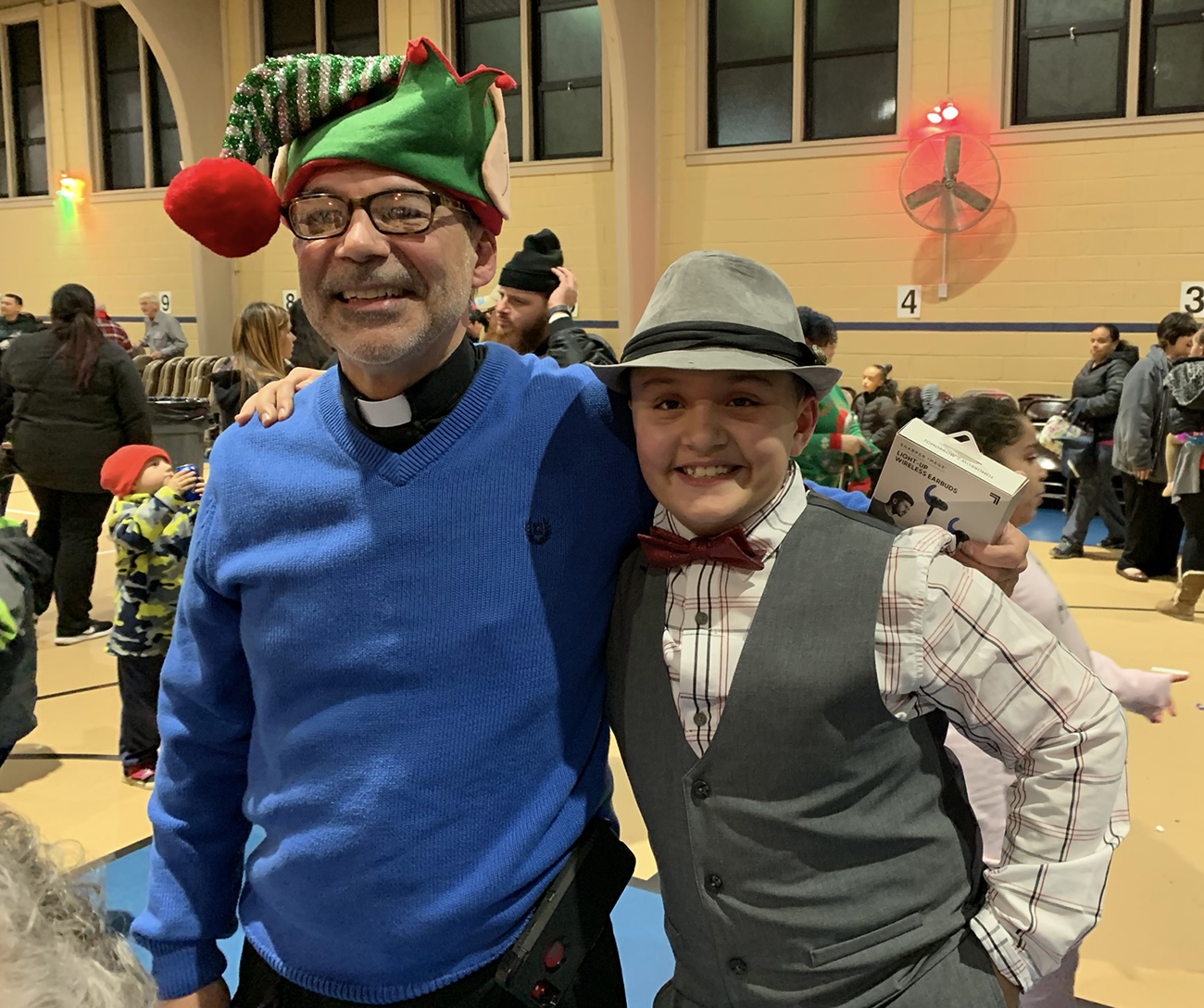 Father Angelo Hernandez of Holy Innocents Parish in Philadelphia directed a cast and crew of more than 40 children in a Dec. 6 performance of “‘Twas the Night Before a Holy Innocents Christmas.” The adaptation of the beloved Christmas poem was dedicated to Father Hernandez’s mother, who passed away just weeks before the show opened. (Photo by Gina Christian)

When his mother died just before Thanksgiving this year, Father Angelo Hernandez considered cancelling the Christmas children’s show he was directing.

“My heart was just not in it,” said Father Hernandez, a parochial vicar at Holy Innocents Parish in Philadelphia. “I was deep in the early stages of the grief cycle.”

Scrapping the show would have been a first for Father Hernandez, who has written and directed numerous productions at his various pastoral assignments.

Before packing up the props, though, Father Hernandez decided to consult his executive producer.

“I prayed to the Holy Spirit for wisdom and fortitude,” he said. “Then I asked myself what Mom would want me to do.”

Sergia Hernandez had always encouraged her son’s creative streak, and regularly “took a front row seat” at all of his performances, he said. After some soul-searching, Father Hernandez realized she would have told him the show must go on.

And it did just that on Dec. 6, as the curtain rose on “’Twas the Night Before a Holy Innocents Christmas.” The production, which drew some 375 attendees, featured a cast and crew of more than 40 children from the parish, its school and the local community.

Children and teens from Holy Innocents Parish in Philadelphia appeared in a Dec. 6 production of “‘Twas the Night Before a Holy Innocents Christmas.” Director Father Angelo Hernandez dedicated the show to his mother, who died in November. (Gina Christian)

The show also included several ballet ensembles in the roles of “sugar plum” and “tiny” fairies, and a “dance of the reed pipes” choreographed by Laura Rafferty. A children’s choir, directed by liturgical music composer Giovanni Morales, performed several Christmas carols in both English and Spanish.

Seated in a rocking chair to the side of the stage, Father Hernandez narrated an adaptation of “Account of a Visit from St. Nicholas,” a poem first published anonymously by the Troy Sentinel in New York State on Dec. 23, 1823.

The text’s description of a Christmas Eve visit by St. Nicholas – which opens with the line “’Twas the night before Christmas” — forged the popular image of Santa Claus as a plump bearer of toys and holiday cheer. American scholar Clement Clarke Moore claimed to have written the poem, although the family of landowner and poet Henry Livingston, Jr. contested the assertion. Analysts remain divided on the issue of authorship, but Father Hernandez – who tweaked the text to include parish references — encouraged his cast “to use their own personalities and imaginations” in the Holy Innocents production.

“You could actually watch them take off and run with it,” he said.

Such creative license was part of the project’s goal to “build the children’s personalities and imaginations,” said Father Hernandez, noting that the approach “empowers our children to use and develop their unique talents.”

Although the original poem does not make mention of the Nativity, Father Hernandez said he ensures that every drama he produces “clearly communicates to the audience the reason for the Christmas season is the birth of Christ, and how he came to bring salvation to all.”

At the Dec. 6 show’s climax, the stage lights were dimmed to show a clip from the 2006 film “The Nativity Story,” depicting the visit of the shepherds to the newborn Christ.

Cast, crew and audience then sang “Happy Birthday, Jesus,” bid Santa Claus farewell and wrapped a production that Father Hernandez had vowed to make his best show ever by dedicating it to his late mother.

“I felt she encouraged me from on high to think outside the walls of grief, which can confine and obstruct,” he said. “Mom has always been my inspiration, and a true model of what self-sacrificing love is all about.”

NEXT: Latino tradition is a ‘dress rehearsal’ for Christmas