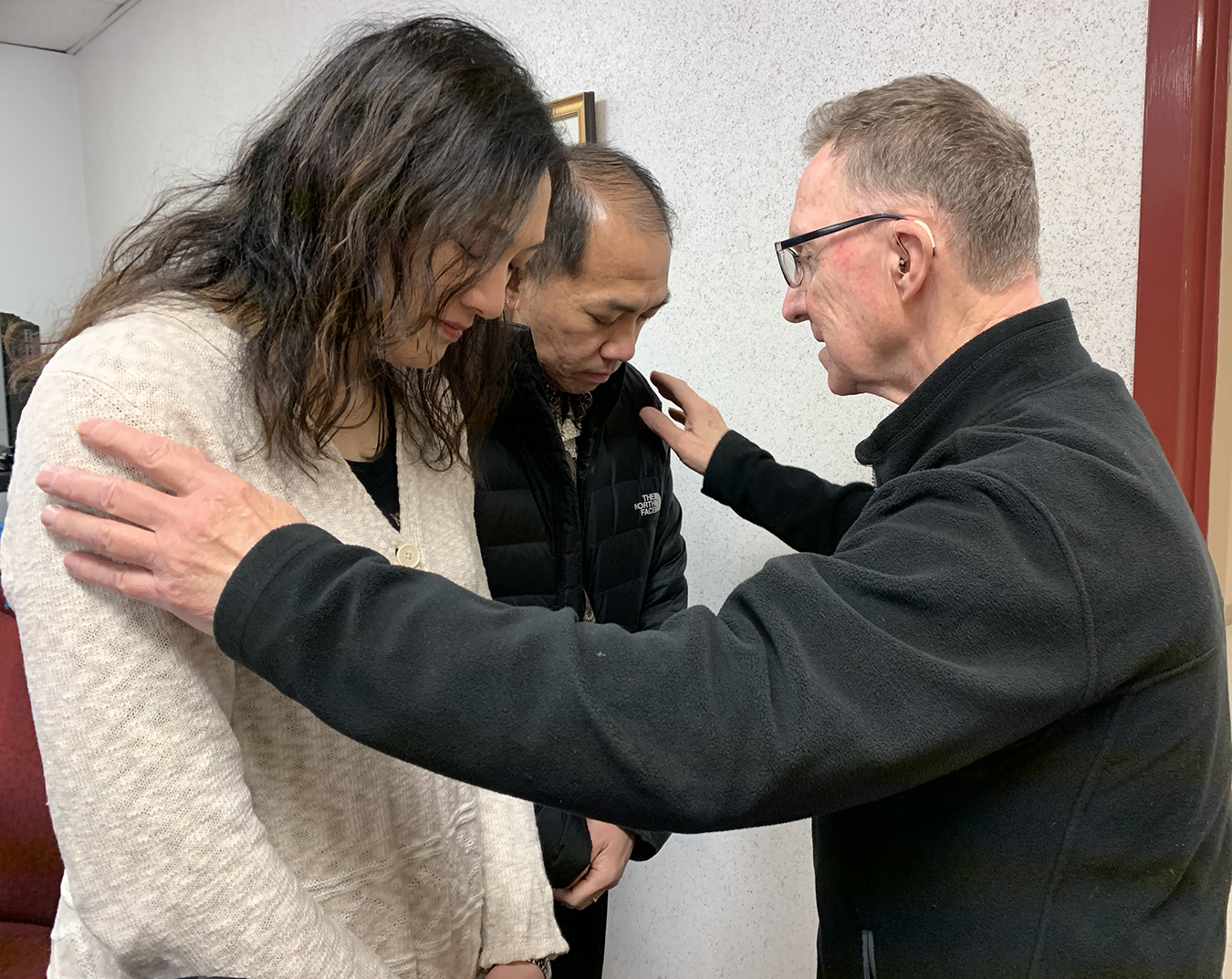 Philadelphia Auxiliary Bishop Edward M. Deliman blesses Ellyana and Yulius, a South Philadelphia couple who fled ethnic and religious persecution in their native Indonesia. Arrested in July 2019 by immigrations officials after several unsuccessful efforts to gain asylum, the couple was released from ICE detention on Dec. 16 and met with Bishop Deliman on Dec. 19. (Photo by Gina Christian)

A Catholic family from South Philadelphia is celebrating a Christmas miracle, reuniting just in time for the holidays after months in immigration detention.

“I kept praying, ‘Jesus, I want to sing in church again,’” said Yulius, a fifty-something restaurant professional who along with his wife Ellyana fled religious and ethnic persecution in their native Indonesia some 20 years ago.

For the past two decades, the couple – who asked to be identified only by their first names — had attempted to secure asylum, without success. In the meantime, they gave birth to two daughters (both U.S. citizens) and built a quiet, hardworking life centered around their faith and their family.

All that changed on July 2, when they were arrested by Immigrations and Customs Enforcement (ICE) officials while heading to their jobs in area cafes. They were held in ICE custody at two facilities some 170 miles apart: Yulius at Pike County Correctional Facility, and Ellyana at York County Prison. Their daughters — one in high school, the other in college — were taken in by a relative.

In November, CatholicPhilly.com received permission from ICE to interview Yulius and Ellyana at their respective prisons. For the safety of their family and friends, the couple requested at the time that CatholicPhilly.com withhold their actual names, as well as those of their children, pastor and parish.

(Related: Read CatholicPhilly.com’s previous interview with Ellyana and Yulius during their detention by immigrations officials.)

Shortly after that interview, the couple received word that a previously filed motion to reopen their removal proceedings had been granted, and that their prior order of deportation had been rescinded. On learning that a bond hearing was scheduled to take place in mid-December, friends and community members (including a number of local Catholic clergy and religious) redoubled their prayers that Yulius and Ellyana would be home for the holidays.

On Dec. 16, those prayers were answered, as the couple were released on bonds of $2,500 each after a Dec. 16 immigration hearing at York County Prison, where Ellyana had been held. Yulius participated in the proceedings remotely via video conference. Some 20 supporters, including the couple’s older daughter, attended the brief proceeding; their younger daughter was not permitted in the courtroom due to age restrictions. 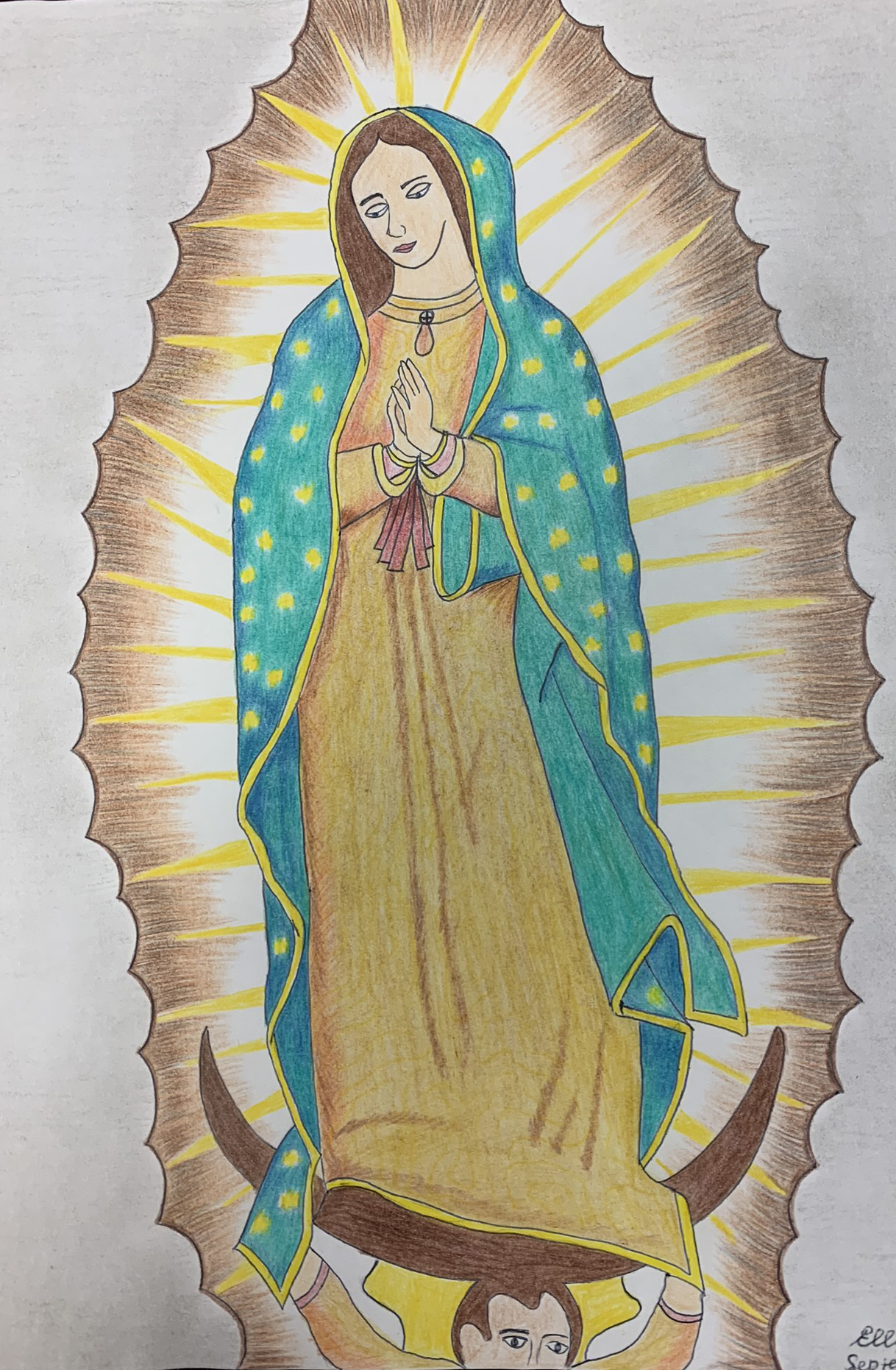 A pencil sketch of Our Lady of Guadalupe created by Ellyana, an Indonesian refugee to the U.S., during her detention by immigration officials at York County Prison from July to December 2019. (Photo by Gina Christian)

The bond amounts – which can often be 900% higher than the $1500 required by federal law – were a relief for the couple, who have been without any form of income for five months.

Attorneys Christopher Casazza, Alex Isbell and Caitlin Faye, who represent the couple, had worked hard over the past several months to secure their clients’ release — but Casazza said he remains “frustrated that their family had to undergo such a traumatic event.”

That same sentiment was echoed by Philadelphia Auxiliary Bishop Edward M. Deliman, who met with the couple on Dec. 19 at his office in the Archdiocesan Pastoral Center.

“I’m sorry that this happened to you in our country,” said Bishop Deliman, after listening to the couple describe how persecution had driven them to the United States, and how their faith had sustained them during their months of incarceration.

The 1998 collapse of Indonesia’s New Order regime under then-President Suharto was marked by rioting in the Chinese neighborhoods of several cities, including Jakarta, the nation’s capital. Some 1,000 were killed as buildings were looted and set ablaze. Organized campaigns of sexual assault and murder were waged against many of the country’s ethnic Chinese women and girls.

Both Catholics of Chinese descent, Yulius and Ellyana had been accustomed to combined ethnic and religious attacks. Yulius’s brother was beaten to death by a mob while walking to church; his family lost its home and restaurant in a firebombing.

Professor Robert Hefner of Boston University, a noted specialist on minority relations in the Muslim-majority world, said that Indonesia has experienced “some measure of anti-Chinese sentiment for the better part of 500 years.”

Hefner said that the current Indonesian government, under President Joko Widodo, has been making “quiet but sustained efforts” to increase tolerance for religious and ethnic minorities. However, while “most Indonesian Muslims are moderate,” he said there exists “a solid, well-organized 20%” of that group that “want a Muslim-first approach to citizenship.”

Some members of this group embrace “vigilante” tactics even against fellow Muslims, Hefner said. If ultimately deported to Indonesia after two decades abroad, Yulius and Ellyana could find themselves “likely to be singled out for discrimination or targeting,” he added.

The couple said that while they were in prison their past memories, present situation and future prospects often swirled into an overwhelming sense of hopelessness. Both relied on continuous prayer and Scripture meditation to sustain themselves, and attended Bible studies, communion services and Masses whenever these were made available to them.

Each recited the rosary three times per day, and Ellyana, a talented artist, sketched a portrait of Our Lady of Guadalupe from a prayer card. She showed the image to Bishop Deliman during their Dec. 19 meeting, along with another original picture of a woman releasing a bird to fly.

Yulius related to Bishop Deliman a particularly dark moment in detention that proved to be a turning point in his faith. Depressed by severe loneliness – made worse by the constant turnover among fellow inmates – he opened his Bible, and experienced a profound awareness of God’s presence. Afterwards, he wrote a letter to his daughter and asked her to relay his words to Ellyana, who also suffered from intense feelings of isolation.

The couple also sense that their detention experience is part of a larger plan God has for their lives, which they believe will eventually include U.S. citizenship.

Casazza said that he and his colleagues will continue to represent Yulius and Ellyana through the remainder of their immigration proceedings, and he “feels confident” that they “will be able to secure them permanent residency.”

In the meantime, the couple are deeply grateful to celebrate Christmas with family, friends and fellow parishioners.

At the conclusion of their Dec. 19 meeting, they received a blessing from Bishop Deliman, who told them that “God is the one who ultimately releases us from all prisons.” 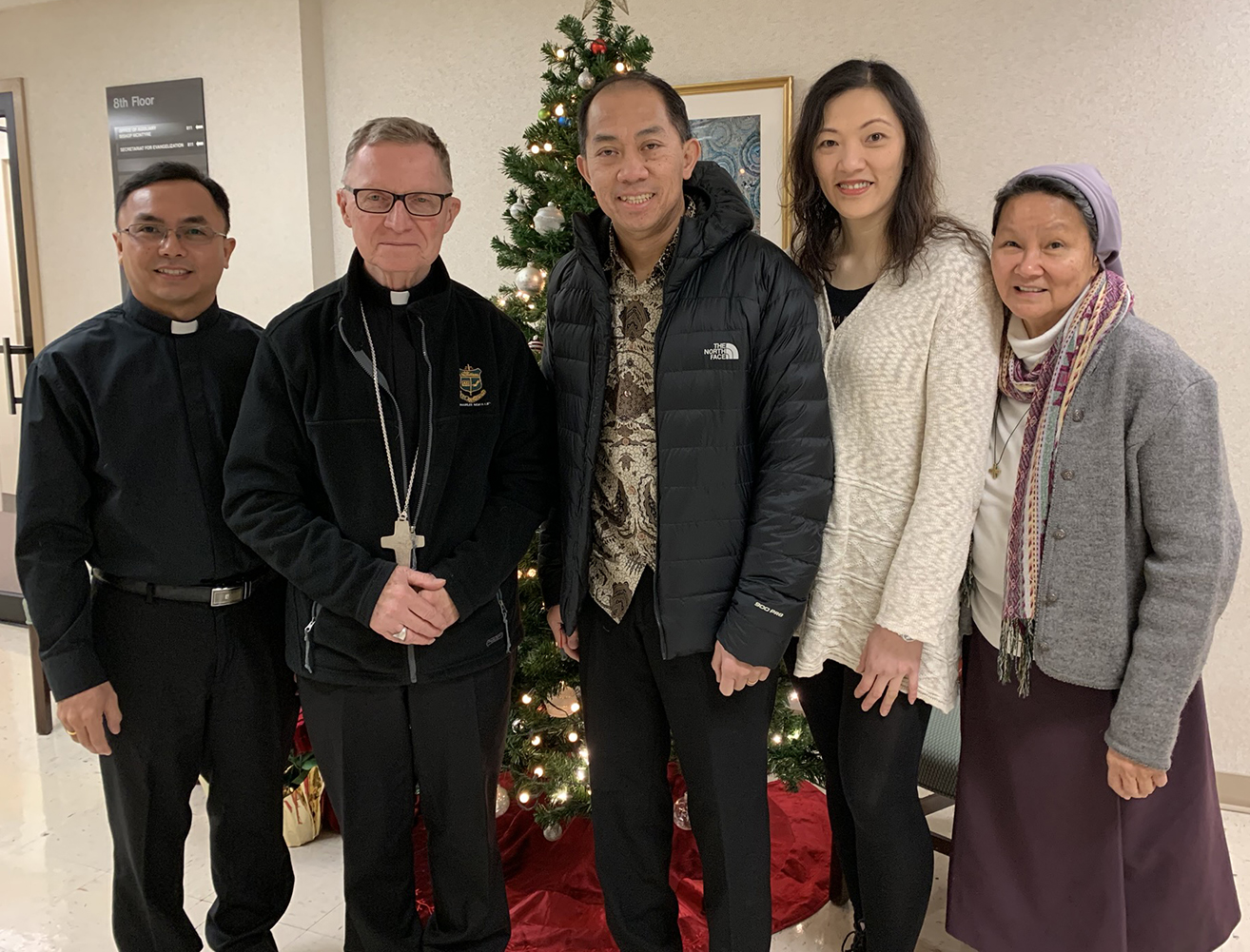