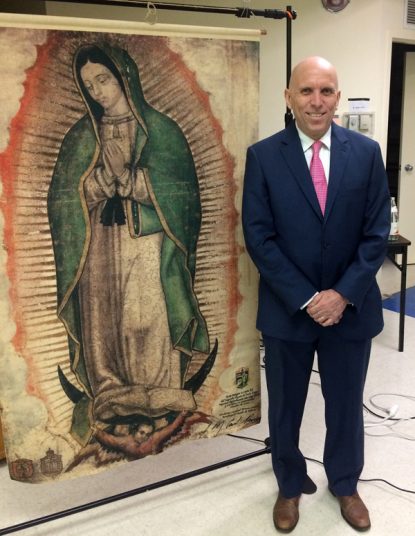 Massimo Paris, standing by a life-size replica of an image of Our Lady of Guadalupe, spoke about his research on the tilma and the shroud of Turin Dec. 12 at Annunciation B.V.M. Parish, Havertown.

About 30 people came to Annunciation B.V.M. Parish in Havertown to hear an expert on the shroud of the Turin and the tilma of Our Lady of Guadalupe on her feast day, Dec. 12.

Massimo Paris, born and raised in Rome, Italy, shared the miraculous history of the shroud from his many years of studying its various aspects, conducting research and visiting sites related to it.

Housed today at the Cathedral of St. John the Baptist in Turin, Italy, the shroud is believed to be the ancient linen burial cloth reflecting the image of Jesus Christ after his crucifixion.

The tilma is the cloak of St. Juan Diego who revealed its image of Our Lady of Guadalupe to Mexican church officials in 1531.

The venerated image of the Blessed Virgin Mary is enshrined in the Basilica of Our Lady of Guadalupe in Mexico City. It is one of the many sites Paris’ travels have taken him.

This was not the first time Paris came to Annunciation B.V.M. to share historical information. He previously lectured on the shroud this past Lent.

Those in attendance found it especially appropriate to hear about the tilma on the very feast day of the Mother of the Americas.

“The miracle of Our Lady of Guadalupe is incredible, one that has inspired faith in millions of Catholics around the world,” said Father Sean Loomis, parochial vicar at Annunciation. “To have that here in our parish, neighborhood and archdiocese is a gift.”

Paris was grateful for the opportunity to return to Annunciation and expand on his talk. After opening with a prayer to the Holy Spirit, he began his talk by displaying life-size replicas of both the shroud and the tilma.

The background of the shroud’s image, he explained, has been modified by some restorations over time, while other untouched areas have been included in scientific studies. The shroud’s cloth contains many weavings from one single piece of thread, the explanation of which remains a mystery, according to Paris. Four red marks are visible on the cloth as a reminder of the blood of Christ. It has a cross section that symbolizes the sacredness of the image.

“The shroud is unique,” said Paris. 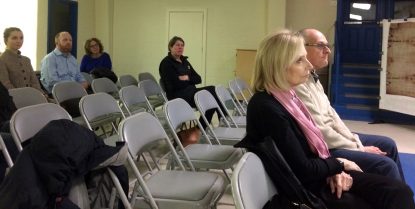 Guests at Annunciation B.V.M. Parish listen to a Dec. 12 talk on the shroud of Turin and the tilma of St. Juan Diego, revealing Our Lady of Guadalupe’s image, by expert Massimo Paris.

The tilma, made in 1531, is 41 inches wide and 67 inches high. While it was put together from cactus fibers and difficult to have a lasting image painted on it, the image has not faded and the cloak itself appears indestructible.

In 1785, a worker was cleaning the case that held the painting and inadvertently spilled strong nitric acid solvent right on to it. In 1921, a bomb with 29 sticks of dynamite in a pot of roses exploded, shattering the altar rail and windows 150 feet high, but the tilma and its case suffered no damage.

Paris believes the shroud and the tilma direct believers to a theology of light. He shared a passage from the Book of Genesis that references the creation: “Let there be light, and there was light.”

“That was the word of God,” said Paris.

Following Paris’ presentation, there was time for questions and answers by the audience. Jack Hartke, a parishioner of Annunciation, was pleased with what he learned about the shroud and the tilma.

“I loved what Massimo did tonight and what he shared,” said Hartke.

To this day, science cannot prove how the tilma has maintained its condition nearly five centuries after it was created. Lou Scaperotto of St. Madeline Parish in Ridley Park was curious as to what discoveries scientists may make about the image in the future.

“There has never been a group of scientists that have worked directly together,” said Paris. “They have studied over 30 disciplines and have a variety of skill.”

As the evening concluded, Father Loomis prayed that those in attendance carry what they learned from Paris into their homes and talk about it with others so that others may also learn about the images and what they represent.

Paris called it “an honor and a privilege” to share his knowledge the guests at Annunciation.

Currently his is a student at the Superior Institute of Guadalupan Studies and a resident of Broomall, Delaware County and member of St. Pius X Parish. 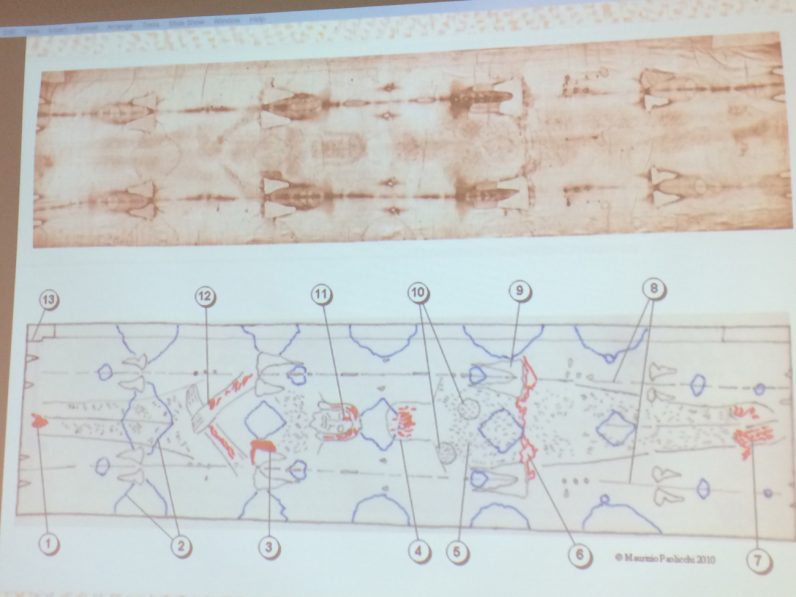 A diagram that Massimo Paris used to study the shroud of Turin is displayed during his Dec. 12 presentation at Annunciation B.V.M. Parish, Havertown.