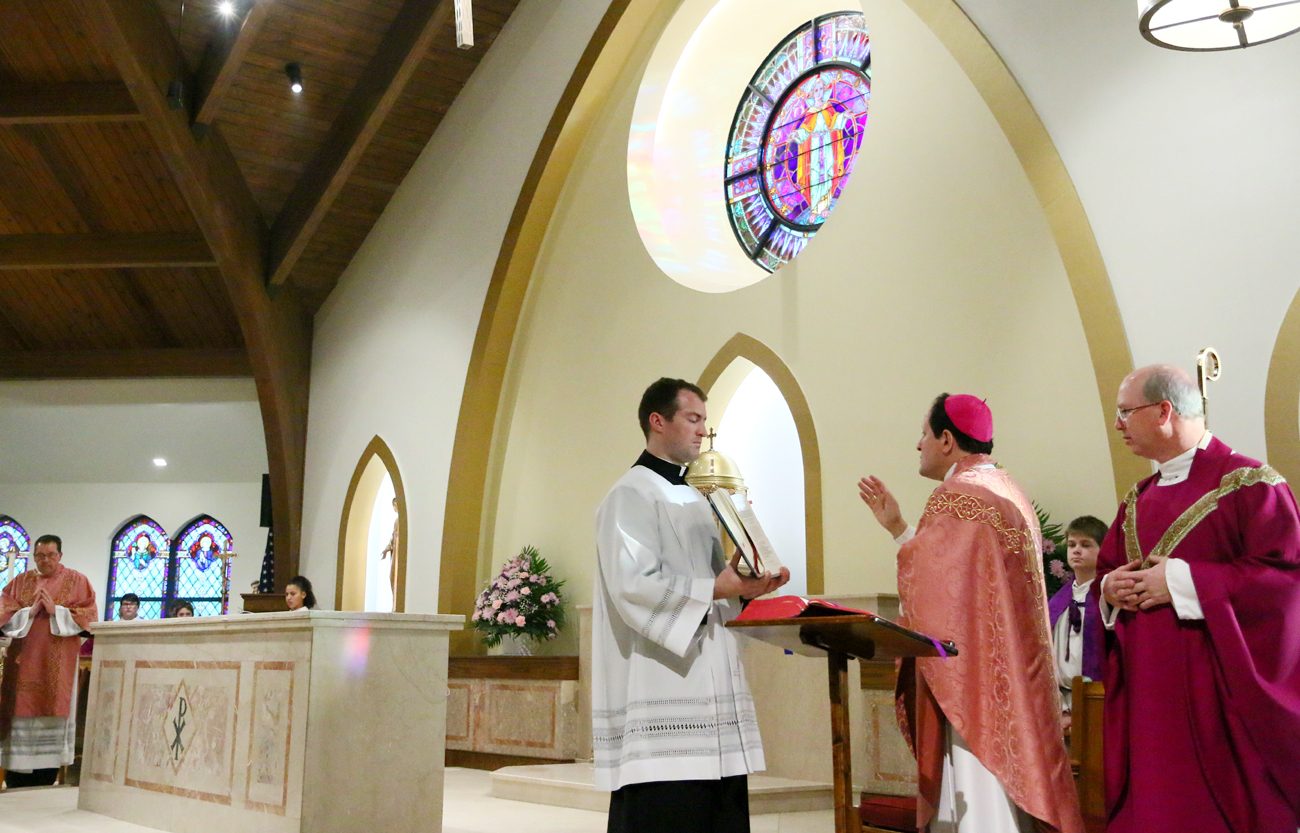 Here’s the challenge: How do you take a church that was built in the early 1970s when stark simplicity was in vogue, do a complete upgrade without a tear-down and make it look like a very nice traditional Catholic church?

It wasn’t easy, since it took careful planning, time and money, but St. John Fisher Parish in Boothwyn, Delaware County has just done that very nicely. The finished product was consecrated by Bishop John McIntyre on Sunday, Dec. 15, the Third Sunday of Advent.

(See a photo gallery from the Mass and views of the church here.)

When the parish was founded in 1971, taking territory from Holy Savior Parish in Linwood, an  early order of business was to erect a church. And so it was that a strictly utilitarian structure was erected and dedicated in 1973.

It was a simple, flat-roofed rectangle with very little natural light or ornamentation, really more like an auditorium than a Catholic church.

Father Robert McDermott, St. John Fisher’s current pastor, believes it was only meant to be temporary.

Temporary often has a way of becoming permanent.  There are a number of parishes in the archdiocese where the temporary church is still in use, and another will probably never be built. 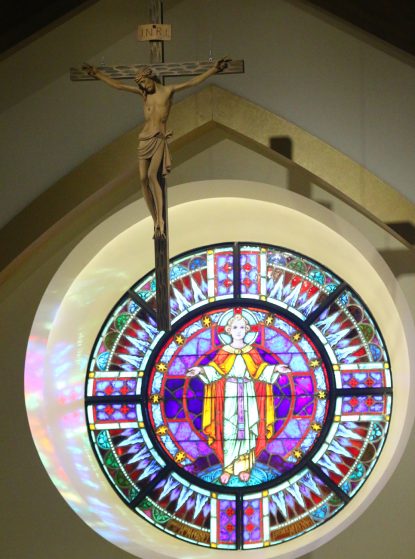 The first St. John Fisher Church was not large, and neither is the renovated church. Over the years other buildings were erected, among them a parish hall to the left of the church that could be opened up for additional Mass seating. To the left of the hall is a small daily Mass chapel that could also be used for viewing a Mass in the main church by way of closed circuit TV.

In the  meantime,  Delaware County has been no  different than the rest of the Philadelphia Archdiocese in that it has seen a decline in church attendance coupled with a shortage of priests available for ministry.

As is usual in such cases , it was a traumatic experience especially for the members of the closed parishes, both of which had beautiful church buildings.

It was not an ideal arrangement. Along with the rather austere look, sight lines for viewing Mass were not always good.

At that time Father McDermott was brought in and his first order of business was the challenging task of melding three congregations into one church, something that he has done very well, according to parishioners.

One of Father McDermott’s early concerns was how to make St. John Fisher more like a traditional Catholic church. Should it be torn down and replaced or given thorough major renovations?

The most striking part of the renovation was removing the flat roof and replacing it with a peaked roof, which enabled the installation of a beautiful stained glass circular window depicting the Holy Child that had previously graced Holy Savior Church.

Other repurposed stained glass windows have been added and new stained glass was constructed to match or complement the old. Marble from the altar rail has become wainscoting at the renovated St. John Fisher.

All of this took time and money, about $1.5 million. In addition to the original parish bequest, there were funds from the sale of the Holy Savior property and also a capital campaign well supported by the parishioners.

“We even had donations from people now living outside of the parish,” Father McDermott said.

Because of the complexity of the renovations, the church proper was closed during the virtual rebuilding of the St. John Fisher Church. All Masses were temporarily celebrated in the adjoining hall with overflow in the chapel, though the use of telecasting.

Now that the work is completed, there is nothing but praise from the parishioners.

“It has exceeded my expectations,” said parishioner Celia Evans, formerly of Immaculate Conception. “The transformation is jaw-dropping. It wasn’t a traditional church and the sight lines were not good.

“It’s all because of the enthusiasm Father McDermott brought to the process. It’s beautiful, it’s ecclesiastical. You can look around and say, ‘this was from Holy Savior; this was from Immaculate Conception.’ I had no clue of the depth of the renovations.”

Jeff Mylanarski, formerly of Holy Savior Parish, said, “It wasn’t just a renovation of a building. Father McDermott has done a great job on this. He energized everyone.

“It’s been great to be part of this. I was from Holy Savior Parish and it is really great to see everyone come together here.” 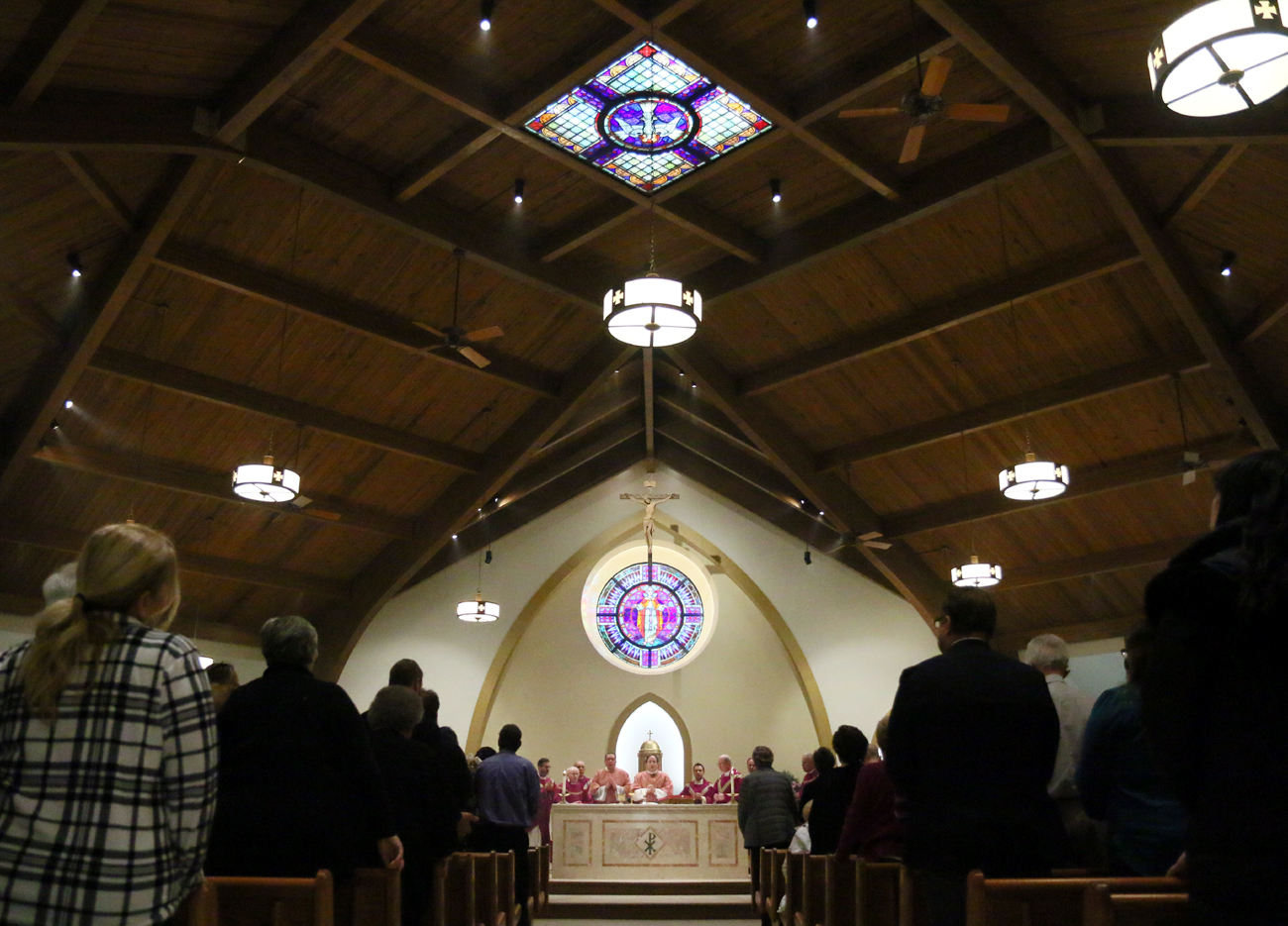 Gone is the flat roof, auditorium look of St. John Fisher Church in Boothwyn, completely renovated in the style of a traditional Catholic church, which was reconsecrated by Auxiliary Bishop John McIntyre during Mass Dec.15. (Sarah Webb)