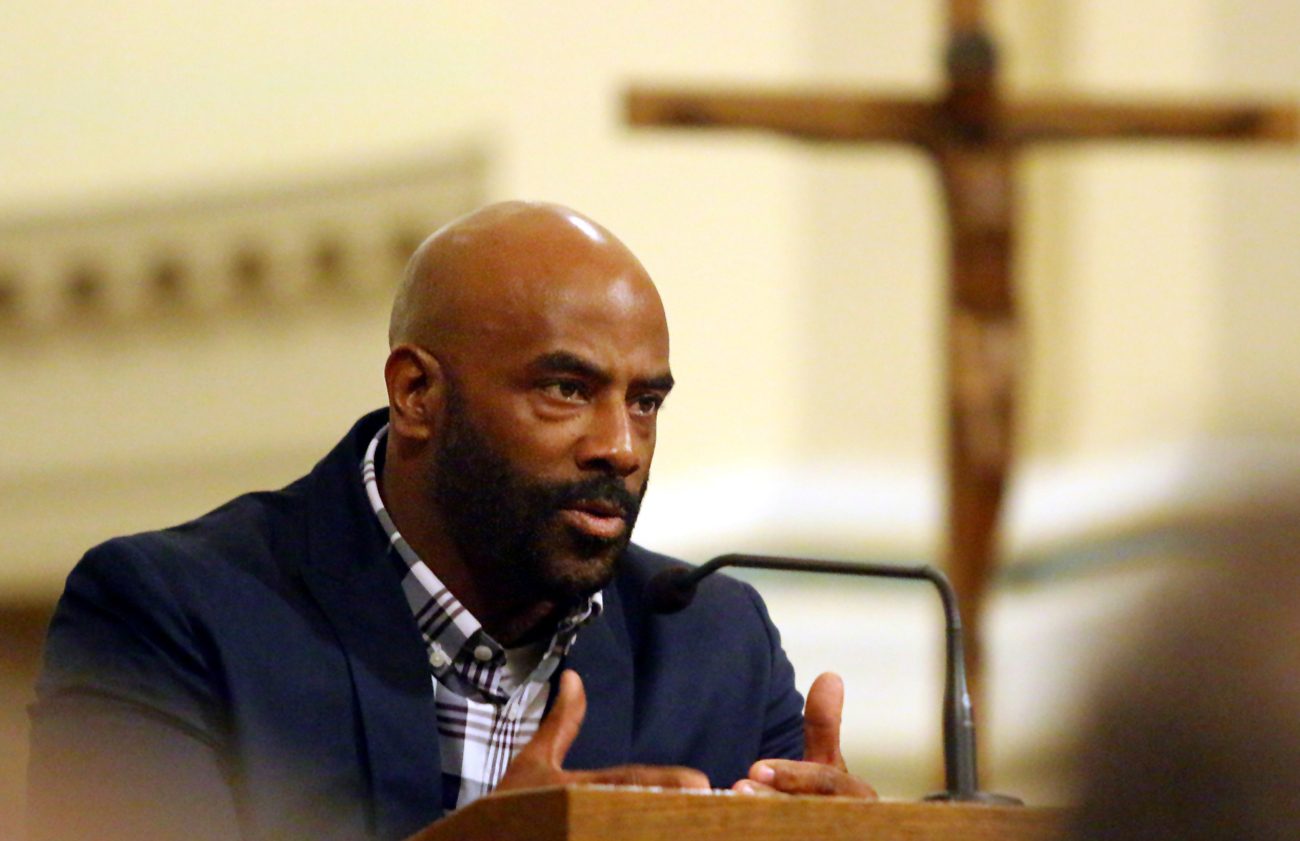 Chester Hollman III, who was exonerated after spending 26 years in prison for a murder in 1993 he did not commit, shares his story during an event at St. Vincent de Paul Church sponsored by Art for Justice and the parish's Peace and Justice Ministry. (Photo by Sarah Webb)

After spending 28 years in prison and wrongfully incarcerated, Chester Hollman III has come home. One of his first stops was at St. Vincent de Paul Church in Philadelphia’s Germantown section.

He told his story at the church Dec. 6 while York County prosecutor LaTasha C. Williams explained how the Chester City native was able to return to Philadelphia. The event was sponsored by St. Vincent’s Peace and Justice Ministry and Art for Justice.

St. Vincent’s parishioner R. Sanders is among the active members of the parish’s Peace and Justice Ministry. After sitting near the front of the church listening intently to the speakers, she said she needed to go home to process all that she had heard. Yet she did walk away with some preliminary conclusions.

“This has made me really reflect on the scope of injustice,” Sanders said. “I was looking closely at this man who lost half of his life, lost whatever career he had, lost contact with others and then is told that he can come out. It seems no one is really accountable.” 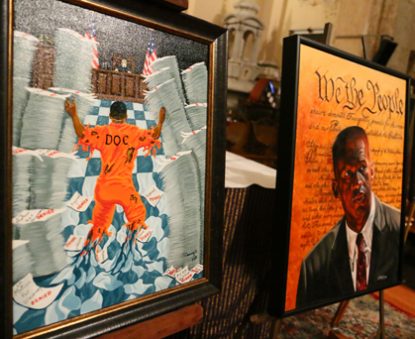 Sanders added she was relieved to learn from Williams that Pennsylvania will create a commission to investigate experiences like that of Hollman, who was wrongfully convicted of a 1991 second-degree murder in Philadelphia and released from prison last July.

“As a member of the Peace and Justice Committee,” Sanders said, “all I can say is that we have work to do. At least (Williams) gave us some of what we need to do to get started.”

In an exclusive CatholicPhilly.com interview, Hollman said he was encouraged by the support and attentiveness he received from Art for Justice, St. Vincent’s and many civic officials. Yet he readily admitted that what happened to him while living in Philadelphia has drained him and he is eager to return to Chester.

“If someone had told me that one day I would be picked up and arrested for something I didn’t do I would never have believed them,” said Hollman. “It shakes you up when you just do not know what can happen to you. I met others who are innocent, but when someone hears that someone has been incarcerated they assume they did something wrong.

“During those years I hoped that someone would (rescue) me. I knew that there had to be some integrity somewhere. That is why I have so much to be grateful for,” he said.

In her remarks Williams spoke about the importance of the new statewide commission that would address the challenges of those who leave prison, particularly if they were wrongfully arrested and/or convicted. She said many who are found innocent still need their criminal records expunged, those who were in prison for most of their adult life need programs to reacclimate them into society and those who are responsible for the wrongful prosecution must be held accountable.

“Many have a theory of what happened and they develop the narrative with a tunnel vision. Then they work to prove their theory … to have their theory work out,” Williams said.

Also present at the event was Dennis Crosson, a private investigator who played a role in uncovering the prosecutorial misconduct that led to Hollman’s wrongful conviction. 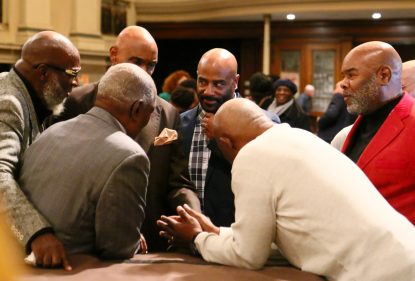 The vocalists of the Chester-based group Gospel Disciples sing “Amazing Grace” for Chester Hollman III, whose uncle Joe is a member of the group, during a Dec. 6 program at St. Vincent de Paul church to welcome Hollman back home after he was exonerated from a 26-year prison sentence for a murder he did not commit. (Sarah Webb)

Though there were tense moments in the church when all were listening intently to Hollman’s and Williams’ remarks, the Gospel Disciples sang many uplifting spirituals and gospel music during the program. The Chester-based ensemble joined with an ecumenical group of Philadelphia singers specifically for this event. They were well received with thunderous applause and scattered standing ovations.

Ann Marie Kirk, co-founder of Art for Justice, said she believed in the collaborative spirit of many coming together to work for the greater good.

Her sentiment was echoed by Natala Green, who learned about the program in her Germantown community and came after work, even though she was tired from a long day.

“(Hollman’s) story shows that there is a God,” she said. “I am glad I heard the music because they were praising the Lord. I listened to everything they said, and I got some important information. Even though the story is tragic, I am leaving here with hope.”

St. Vincent de Paul Parish’s mission is to build a faith community striving to live Jesus’ gospel message of love, peace and justice for all peoples. In support of that mission, the Peace and Justice Ministry meets in the parish rectory for a luncheon on the fourth Tuesday of each month at 11:45 a.m. This year’s focus is white privilege.

Art for Justice’s mission is to support and exhibit prisoner art to promote dialogue on ways to prevent crime, reduce levels of incarceration and improve the criminal justice and correction systems. 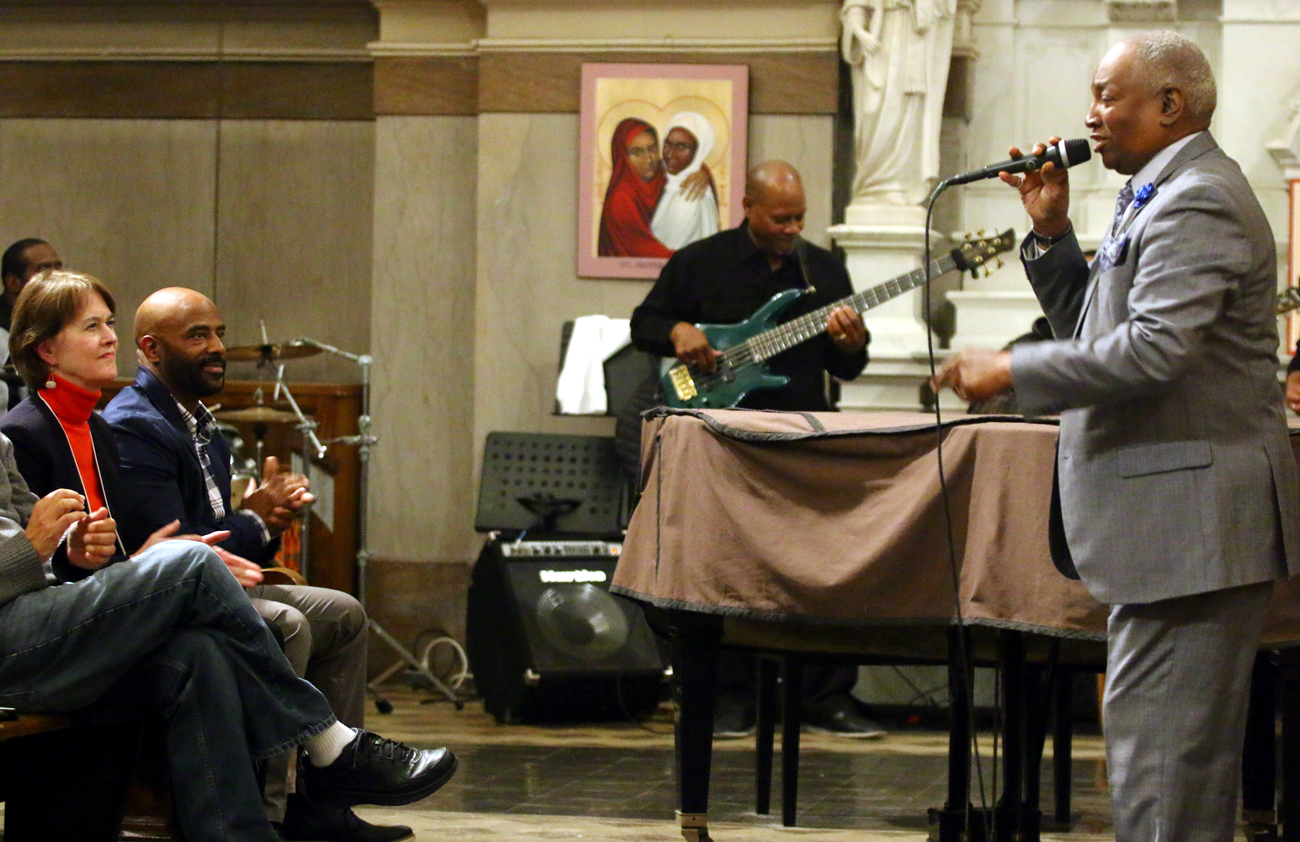 NEXT: Women who make Christmas happen reflect on Martha at retreat