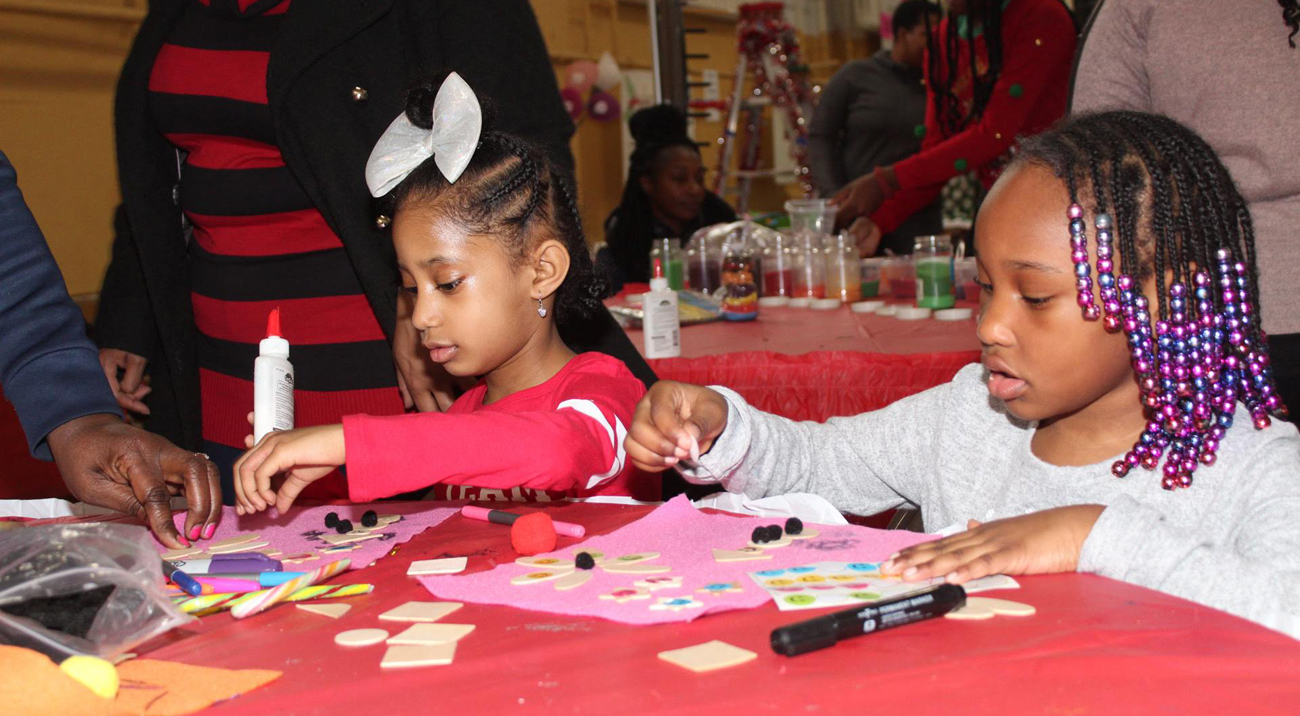 Children make a Christmas craft during one of many activities for people of all ages at the St. Athanasius Christmas bazaar at the church hall Dec. 7. (Photo by Donovan Carter)

When it comes to keeping a pristine, well-funded and thriving parish, one need look no further than St. Athanasius in Northwest Philadelphia, which has two churches — St. Athanasius and St. Benedict — as well as St. Athanasius School.

Its success was no more evident than when the parish held its annual Christmas bazaar for the surrounding neighborhoods on Saturday, Dec. 7.

At the front door to greet the families and individuals that came through was Louise Frasier, a member of the parish’s women’s ministries. She noted many volunteers decorated the six-foot-tall Christmas tree, set up the decorations for Santa Claus and secured the various vendors who were on hand.

“This event is about bringing the community to the parish and giving back to the community,” Frasier said. “We got donations from neighborhood nonprofits as well as from the games with prizes that are here today. The children love the games and taking pictures with Santa Claus.

“It is important that people of God come together with each other and those who are our neighbors,” she said. “We have all kinds of food to eat, things people can buy as gifts, games to play, and just a lot of fun activities for the children. It’s just a (prelude) to the Christmas Eve and Christmas Day Masses.” 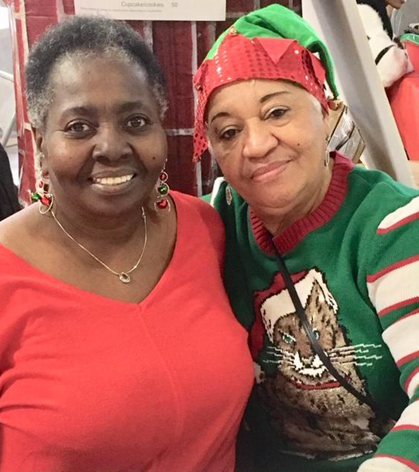 Vera Spence (left), longtime parishioner of St. Athanasius Parish, pauses for a moment with Christmas bazaar hostess Louise Frasier, who worked on the coordinating committee for the Dec. 7 event. (Photo by Arlene Edmonds)

For Vera Spence, who has been a member of St. Athanasius for 36 years, said Christmas bazaars are about families coming together. “This is about the joy of Christmas. The vendors have little things that you can buy for presents. It’s not about how much it costs, but the joy you will bring,” Spence said.

While many of the youngsters at the bazaar were busy having their pictures taken with the superhero characters present, their older siblings and adult family members played games of chance to win prizes ranging from jeweled trinkets to small appliances.

Among the vendors was Crystal Mills-Peyton, who has been a member of St. Benedict Church in the St. Athanasius community for 50 years.

“I started doing this (making artifacts) three years ago because I wanted to do something that those who live on a budget can purchase, something that won’t break the bank,” she said.

Father Joseph Okonski, pastor of St. Athanasius, pointed out that the bazaar “is run by the parish and everything donated goes back to the parish community. The prizes, the decorations, and labor are all donated by the parish and the surrounding community. Many give volunteer time to make this happen.

“We have many of these fundraisers throughout the year,” he said. “The money is split between the parish and the school. Recently these extra funds have to been used to fix things and get repairs made, and the little things that are needed.” 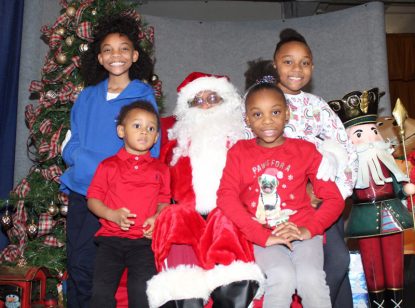 Jerome Black was among the community members who stopped by the event. He saw the sign and people going in and out of the parking lot. He was able to find gifts for his parents and sisters as well as his nieces and nephews. “I think all churches should do this,” Black said.

The end of the bazaar was not the culmination of the day’s activities. The volunteers geared up to move around some of the decorations and set up banquet tables for the evening cabaret. This was an adults-only event that featured music, dancing, a banquet meal and more fellowship.

“We transform the school hall into a night out with a disc jockey, and it is always nice,” said Father Okonski.

Besides the Christmas season, the St. Athanasius community spirit continues throughout the year. In recent years they have held fundraisers with themes ranging from the Great Gatsby Dance, Harlem Nights and Hawaiian Luau to a Mother’s Day Spring Tea. They also host a fish fry, holiday toy drives and back to school events.

Among the groups in the active parish are the Senior Citizens Club, the Men & Women in White, a Legion of Mary chapter, a Women’s Club and a Men’s Club. The Knights of Peter Claver and Ladies Auxiliary also are active at the church. 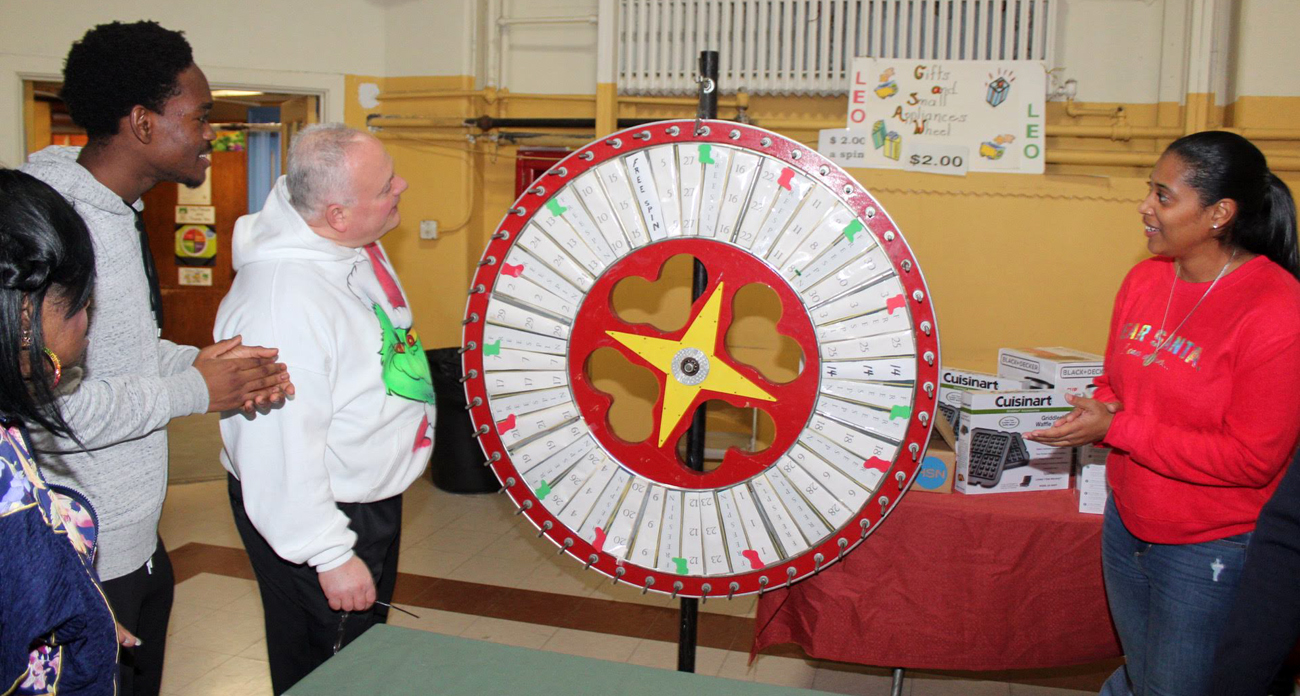 Father Joseph Okonski (center), pastor of St. Athanasius Parish, joins in the fun of the bazaar by taking a chance at the wheel, with the encouragement of parishioners. (Photo by Donovan Carter)

PREVIOUS: Detained by ICE, family longs to be home in South Philly for Christmas