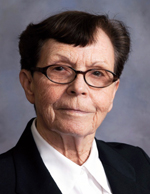 She graduated from Wildwood Catholic (N.J.) in 1962 and worked for three years before entering the Sisters Servants of the Immaculate Heart of Mary in 1965. She received her habit and religious name Sister Elizabeth Bertrand in 1966 and professed her first vows on June 28, 1968.

From 1968 through 1991 she taught primary grade children in Catholic schools in the Archdiocese of Philadelphia, as well as serving as a tutor.

Sister Elizabeth then ministered as a hospital visitor and rendered pastoral care at St. Martha Manor in Downingtown.

NEXT: Sister Mary Breen, 86, dies after 67 years in ministry