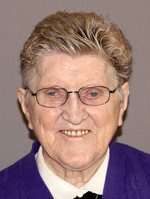 Sister Mary Breen, O.S.F. (formerly Sister Patrick Mary), 86, died Nov. 24 in Assisi House, Aston. She had been a professed member of the Sisters of St. Francis of Philadelphia for 67 years.

Sister Mary was born in Kiskeam, County Cork, Ireland. Along with her sister, Sister Stella Mary Breen, she entered the congregation in 1949 and professed her first vows in 1952.

Most of her ministry was in Oregon and Washington.

In 2018 Sister Mary returned to the East Coast where she served in prayer and hospitality ministry at Assisi House until her death.

The funeral Mass was celebrated Dec. 3. Burial followed in Our Lady of Angels Cemetery in Aston.

In addition to Sister Stella Mary, Sister Mary is survived by her brother, Thomas Breen, many nieces and nephews, and by her Franciscan family.

NEXT: Sister Kathryn Miller dies at 98; was congregational leader