Sister Kathleen Tobin dies at 102, was Franciscan for 78 years 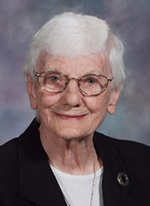 Sister Kathleen Tobin, O.S.F. (formerly Sister Olivera Joseph), 102, died Oct. 31 in Assisi House, Aston. She had been a professed member of the Sisters of St. Francis of Philadelphia for 78 years.

Sister Kathleen was born in Ballingarry, Ireland. She entered the congregation in 1938 and professed her first vows in 1941. Sister Kathleen ministered primarily in elementary education, local house ministry and parish ministry.

Sister Kathleen ministered for 57 years in the Diocese of Trenton. Thirty-seven of those years were spent at St. Rose of Lima Parish in Freehold, N.J. as a teacher in the parish school and as a cook and parish volunteer. She also taught at St. Anthony School and Immaculate Conception School in Trenton, and at St. Michael Home in Hopewell, N.J.

Sister Kathleen also ministered in the Diocese of Harrisburg and the Diocese of Wilmington. Additional ministry included teaching at St. Clement School in Rosedale, Maryland, and at St. Joseph Academy in Chickasha, Oklahoma.

In 2011 Sister Kathleen moved to Assisi House, the congregation’s retirement residence in Aston, where she served in prayer and hospitality ministry until her death.

The funeral Mass was Nov. 6. Burial was in Our Lady of Angels Cemetery in Aston. Sister Kathleen is survived by two nieces and by her Franciscan family.