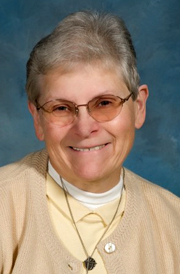 The daughter of the late Vincent and Margaret Maguire, she attended Holy Angels Grade School and Cardinal Dougherty High School in Philadelphia.

In September 1968 she entered the Sisters of St. Joseph, Chestnut Hill, and professed her final vows in 1976.

Sister Margaret ministered in the Archdiocese of Philadelphia and the dioceses of Allentown and Trenton.

She is the sister of Patricia McNulty (Joseph), Ann Dean (Daniel), Vincent Maguire (Melanie), Timothy Maguire and the late Joseph Maguire. She is also survived by a sister-in-law, Mary Rose Maguire, nieces, nephews, grandnieces and grandnephews and members of her congregation, the Sisters of St. Joseph.

The funeral Mass was celebrated Nov. 4 at St. Joseph Villa.

Donations may be made in Sister Margaret’s name to St. Joseph Villa, 110 Wissahickon Avenue, Flourtown, PA.

NEXT: Sister Kathleen Tobin dies at 102, was Franciscan for 78 years