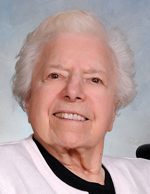 She had been a professed member of the Sisters of St. Francis of Philadelphia for 79 years. Sister Kathryn was born in Hazleton, Pa.

Sister Kathryn ministered primarily in elementary education and also spent a number of years in congregational ministry on both provincial and congregational leadership teams.

During her 35 years in the Archdiocese of Philadelphia, Sister Kathryn taught at Our Lady of Consolation School in Philadelphia and later ministered at Neumann University in Aston. She served a term as a member of the congregational leadership team and later served as local coordinator of Our Lady of Angels Convent, the congregation’s motherhouse.

In 2008, Sister Kathryn moved to Assisi House where she served in prayer and hospitality ministry until her death.

Sister Kathryn also ministered for 30 years in the Diocese of Trenton. In addition to teaching, she also served the congregation as council member and then as provincial in the former St. Anthony Province which was located in Trenton.

She also served as principal of two schools in the Diocese of Metuchen and taught in the Diocese of Allentown.
The funeral Mass was celebrated Dec. 11 in Assisi House. Burial followed in Our Lady of Angels Cemetery in Aston.

Sister Kathryn is survived by a sister, Marie Miller, nieces, nephews, and by her Franciscan family. Donations in her name can be made to the Sisters of St. Francis Foundation, 609 S. Convent Road, Aston, PA 19014.