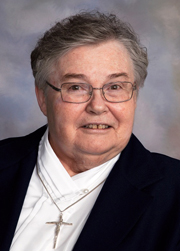 Born Feb. 21, 1938 to parents Loretta (Leahy) and John Joseph Dinda, she attended St. Barnabas School in Philadelphia. After graduating from West Catholic Girls’ High School in 1956 she entered the I.H.M. congregation on Sept. 8, 1956. She received her habit and religious name, Sister Loretta Shaun, on March 9, 1957 and professed her first vows on Aug. 19, 1958.

From August 1958 until January 1991, Sister Loretta taught children in sixth, seventh, and eighth children in the Philadelphia Archdiocesan schools. From 1991 to 2010 Sister Loretta studied clinical pastoral education and served in pastoral care at Jeannes Hospital and Nazareth Hospital.

In August 2010 she served her own I.H.M. sisters at Camilla Hall as a pastoral care giver until she herself was in need of care. Sister Loretta’s last assignment was to serve in the Apostolate of Prayer at Camilla Hall.

She is predeceased by her parents and her brother, Father John J. Dinda. She is survived by her brother Walter (Mary Louise), her sister Lucy Tucker (Stephen), loving nieces and nephews, and her congregation of I.H.M. sisters.

The funeral Mass was celebrated Oct. 24 at Camilla Hall by Father William Dean, who was also the homilist. Donations may be made in Sister Loretta’s name to Camilla Hall, I.H.M. Mission Advancement, 230 IHM Drive, Malvern, PA  19355.