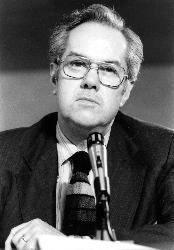 He died in Lake Mary, where he and his wife of 76 years, Ethel, have lived in recent years with their son Thomas More Patrick Doyle and his family.

His father “was an example and a model for us to the point where I have dedicated my life to working for the church and dedicated myself to Catholic education,” he added. Thomas is president of Bishop Moore Catholic High School in Orlando.

“We were all given a true model in my father in how to live your faith,” he added.

Jim Doyle took over as CPA executive director in 1958, after editing a trade journal in New York, following service in the U.S. Army in World War II. He felt directed to the CPA by God, he said, and in his interview with CPA officers told them they would be making a huge mistake if they didn’t hire him — and they agreed, he once said with a smile.

James Aloysius Doyle was born in Pittsburgh in the Crafton Heights section March 20, 1921. His father, grandfather and great-grandfather also were all named James Aloysius, although the fourth-generation “James A.” liked to be called just Jim.

He had an older brother, Elmer James, and a sister, Mary Alice, who died in infancy. His mother was Anna Maria Holthaus, daughter of a German steelworker who emigrated from the Ruhr region of Germany to work in the Pittsburgh mills.

Doyle’s father was an accountant, who changed jobs often in the Depression, as a consequence of which the family moved several times in the Midwest, finally settling in the New York area on Long Island.

Doyle attended Queens College of the City of New York, then a new campus established in Mayor Fiorello La Guardia’s term. He was elected president of his class of 1943 and Ethel Miriam Clancey was elected vice president. Working as class officers, they fell in love and were married in October 1943.

Doyle served in World War II in Army Military Intelligence, as an aerial photo interpreter — first on Bougainville Island in the Pacific and then in Gen. Douglas MacArthur’s headquarters in Brisbane and Melbourne, Australia, and Manila, Philippines.

Among the many photos he interpreted and annotated were pictures of Hiroshima, Japan, destroyed by U.S. atomic bombing. He was awarded a citation for this World War II service by General Headquarters, U.S. Army Forces in the Pacific and Southwest Pacific.

Upon returning from the war, Doyle joined the Army Reserve to get extra money for his and Ethel’s growing family, but was recalled to duty in 1951 as an intelligence officer and served in Germany at a time there was fear World War III might break out.

In 1984, Jim was named a Knight of St. Gregory the Great by St. John Paul II for his service as CPA executive director. Then after retiring from the CPA, for several years he wrote a column in Catholic New York, newspaper of the Archdiocese of New York. Some of those are collected in “Tales from a Real Life,” published by St. Mary’s Press. An earlier book, “Two Voices: A Father and Son Discuss Family and Faith,” by Jim and son Brian was published by Liguori Publications.

Besides his wife, Ethel, and son Thomas and his wife, Diane Terorde Doyle, Jim Doyle is survived by daughter Elizabeth Marie, a Buddhist in Wappinger Falls, New York; and son Peter Joseph, of Broomfield, Colorado, and his wife, Sharon Wolf Doyle.

Two of Ethel and Jim’s sons preceded him in death: John Kevin Doyle, a tenured professor at Benedictine University in Lisle, Illinois; and Brian James Doyle, an award-winning author of novels and essays and editor of the University of Portland’s magazine.

Two of Ethel and Jim’s earlier sons, Seamus and Christopher, died in infancy.

At the CPA’s 2013 convention in Denver, association officials passed a resolution congratulating Jim and Ethel Doyle on what was their upcoming 70th anniversary that October. It said the Doyles were “devoted Catholics, Christian disciples, exemplary spouses, man and woman of principle, wise and loving parents, loyal friends to so many who love them.”

CPA executive director Tim Walter, on behalf of the association, extended condolences to Doyle’s wife, his son Tom and the rest of the Doyle family. “I never met Jim in person, but he consistently followed the association as an honorary member and frequently emailed me with comments of encouragement and support after reading The Catholic Journalist,” the CPA’s newspaper.

Walter noted Doyle was the CPA’s first full-time executive director. “We are grateful for his passion and dedication to the stability and future” of the organization, he added.

Cardinal Edwin F. O’Brien, grand master of the Equestrian Order of the Holy Sepulchre of Jerusalem, recalled how when he was a New York auxiliary bishop and archdiocesan director of communications, Doyle “quietly and professionally” worked behind the scenes in the founding of Catholic New York, the archdiocesan newspaper.

As communications director, Cardinal O’Brien said, he was tasked to put together a plan for a new archdiocesan weekly. “I called the CPA and Jim responded in calm reassurance and within weeks we had as fine a staff to be gathered with Gerry Costello, then Ann Buckley and we took off. Jim was always there for trusted advice.”

“Time passes, and it is possible that many in today’s world of Catholic communications, in this country, and even beyond, never knew James A. Doyle well or know of the extraordinary service that he gave the profession and the church,” said Msgr. Owen F. Campion, a former associate editor of Our Sunday Visitor and a former editor of the Tennessee Register, newspaper of the Diocese of Nashville.

Msgr. Campion, now OSV’s chaplain, said during his service as CPA president, CPA treasurer for two terms and board member for three terms, Doyle “became for me a model, and he and his wonderful wife, Ethel Clancey Doyle, became dear friends.”

“Jim wisely, carefully and generously oversaw CPA business but also affected Catholic communications, very much for the better, for three decades,” the priest said, adding that Doyle drew U.S. church communications “into ecumenical settings, into modern technology and into the wider, universal apostolate of the church.”

“He urged professional efforts that, in every respect, corresponded with the highest Catholic standards of dialogue, truth, honesty, informed comment, and absolute commitment both to the church, as the body of Christ, and to the dignity of every person,” Msgr. Campion said.

Besides his professionalism, the priest added, Doyle should be “vividly remembered for the nobility and strength of his soul.”