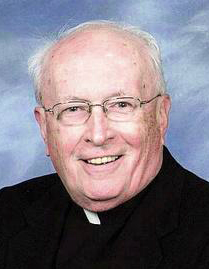 Born in Philadelphia, the son of the late Patrick Mulgrew and the late Catherine (Healy) Mulgrew, he attended Our Lady of the Rosary School and St. Thomas More High School before entering St. Charles Borromeo Seminary.

He was ordained May 10, 1956 by Archbishop John F. O’Hara at Immaculate Conception Church, Philadelphia and his first assignment was as parochial vicar at St. Patrick, Pottsville. He then served on the faculty of Cardinal Dougherty High School, 1957-1973. Among his secondary assignments, he served on the adjunct faculty of La Salle University for 14 years.

After Cardinal Dougherty, Father Mulgrew served as parochial vicar at Epiphany of Our Lord Parish in Plymouth Meeting and St. Matthias Parish in Bala Cynwyd. In 1982 he was appointed pastor of Holy Spirit and remained until he was named pastor emeritus in 1999.

“He taught me at Cardinal Dougherty in my senior year,” said Father Edward Bell, whose vocation Father Mulgrew influenced. “He loved being a teacher and he really challenged us and engaged us. He had us reading C.S. Lewis.

“He wasn’t trying to be cool, the kids would have seen through that,” Father Bell said.

Lou Campione, a long-time active member of Holy Spirit Parish, remembers Father Mulgrew’s gift of being able to relate to the people. He was not only pastor but was chaplain to Desoto Council, Knights of Columbus, which met at the parish, of which Campione is a past grand knight.

He recalls Father Mulgrew was especially proud of his Irish roots, and every year would visit his scattered family in Scotland, Ireland and England.

In recent years, Father Mulgrew lived at Father Bell’s rectory in Nativity B.V.M. Parish, Media. “His homilies were very much like a lesson, and he was loved here,” Father Bell said.

As a matter of fact, Father Mulgrew’s funeral is being held up for an extra week, Father Bell explained, because so many relatives are coming  from overseas, even  one person coming from Afghanistan.

There will be a viewing for Father Mulgrew at Nativity B.V.M. Church on Friday, Nov. 15 at 9 a.m. His funeral Mass will follow at 11 a.m. with Bishop Edward M. Deliman as the principal celebrant. Among the concelebrants will be Msgr. Ralph Chieffo, Msgr. Joseph McGeown, Father Bell, Father William Chiriaco, Msgr. William Quinn and Father John Baron, who will be the homilist.