Daniel K. Fitzpatrick, the president of Citizens Bank Mid-Atlantic region, joined distinguished company Nov. 22 was he received the annual Commodore John Barry Award by the American Catholic Historical Society (ACHS) during a dinner at the Union League of Philadelphia.

(View scenes from the event in our Photo Features section.)

Fitzpatrick also has something in common with John Barry for whom the award is named. Barry was born in humble circumstances in Ireland and started work as a boy on his uncle’s fishing skiff then as a cabin boy on a merchant ship. Coming to America, he became the first commissioned officer in the infant United States Navy, battling the British throughout the Revolutionary War.

Like Commodore Barry, Fitzpatrick grew up in modest circumstances, in Northeast Philadelphia’s St. Jerome Parish, the seventh of eight children where his father was his own role model.

After Father Judge High School Fitzpatrick went on to La Salle University then earned an M.B.A. from Drexel University. Meanwhile he married Beth McFermott, his wife of 30 years who comes from an equally large family and together they raised four children, Lacey, Daniel, Olivia and Mia. 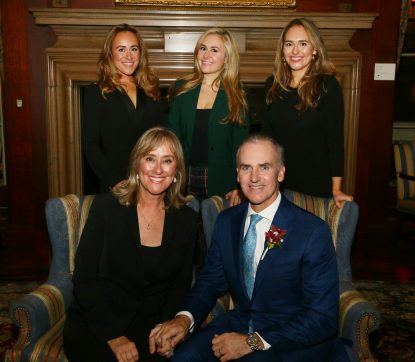 Daniel K. Fitzpatrick poses with his wife Beth and their daughters. (Photo by Sarah Webb)

For much of their marriage they lived in St. Andrew Parish in Newtown, but now are members of Old St. Mary’s in Philadelphia, which is directly across the street from the American Catholic Historical Society. Coincidentally, Commodore John Barry himself is buried in Old St. Mary’s churchyard.

In his business career, Dan Fitzpatrick climbed the ladder through many challenging positions in the banking field, but that’s not in itself a valid reason to receive the Barry Award.

A former chairman and CEO of the Greater Philadelphia Chamber of Commerce, he had a special focus on working with public and nonprofit partners to provide work force solutions and opportunities to disadvantaged populations.

Hearkening back to his own Catholic education, Fitzpatrick served two terms on the Archdiocesan School Board and also the Board of Catholic Social Services. He is currently a member of archdiocesan Executive Board of Elementary Education and has been active with BLOCS (Business Leadership Organized for Catholic Schools).

Receiving the Barry Award means something to him. Noting the 300 or so people who attended the award dinner, Fitzpatick said, “It’s a great gathering of people who are committed to making the world a better place and that is what it’s all about. It is what you do well to help your fellow man, and I’m glad to be in a position to help.”

Michael Finnegan, current president of the ACHS, suggests Fitzpatrick really represents what the Barry Award is all about. “He’s a Philly boy out of Catholic school with a lot of talent. But no matter how high he rises, he keeps in mind what is right and what the right thing is to do.”