Life’s trials train Christians to be sensitive to others, pope says 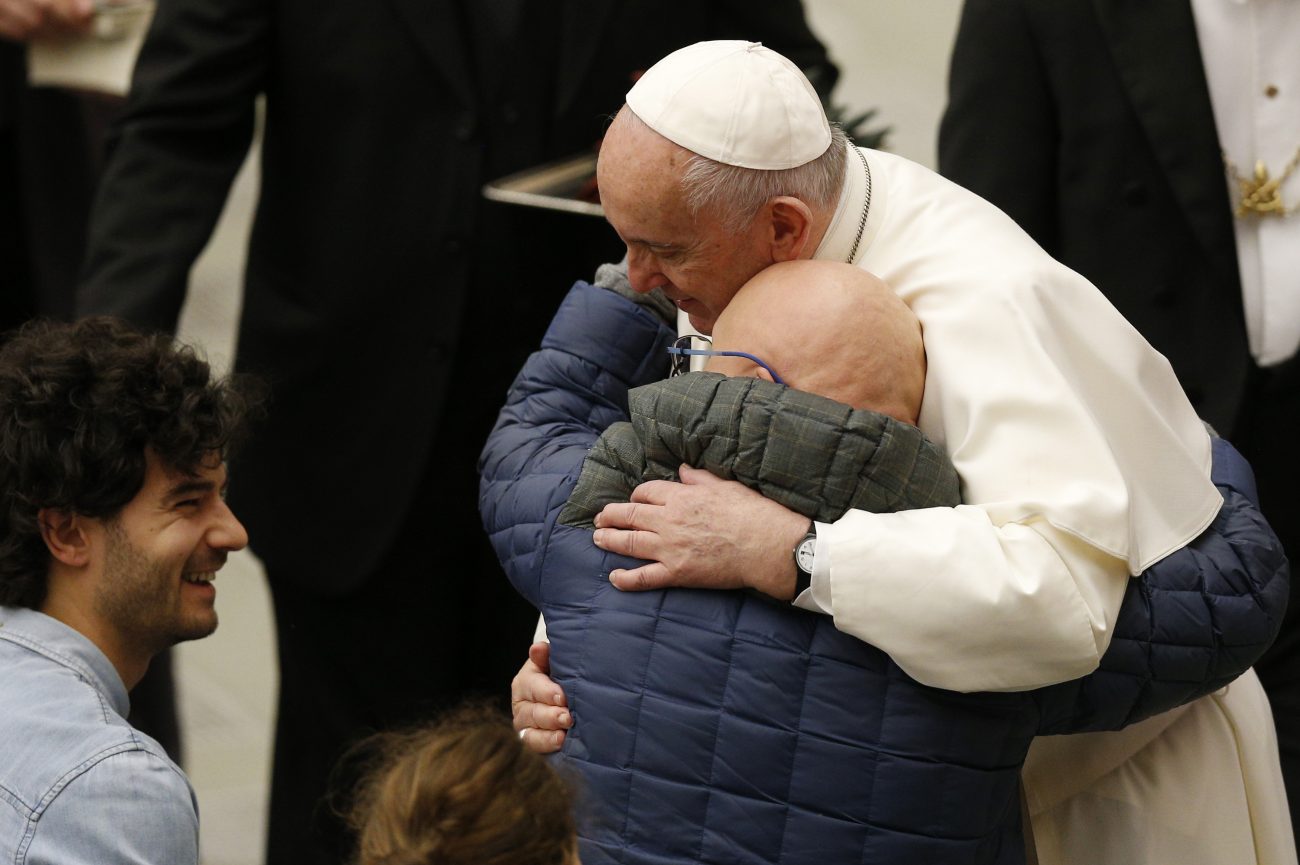 Pope Francis embraces a man as he meets the disabled during his general audience in Paul VI hall at the Vatican Jan. 8, 2020. (CNS photo/Paul Haring)

VATICAN CITY (CNS) — Christians survive trials and tribulations with the help of their faith in Christ and pay it forward by being compassionate toward others who suffer, Pope Francis said.

“A ‘tried’ Christian can certainly become closer to those who suffer and make his or her heart open and sensitive in solidarity with others,” the pope said Jan. 8 during his weekly general audience.

Arriving at the Paul VI hall for the first audience of the new year, the pope greeted pilgrims as he made his way toward the stage.

Following an incident Jan. 31 in which the pope slapped the hand of an overly eager pilgrim who grabbed him, he jokingly expressed fear of greeting an excited nun who wanted to give him a kiss on the cheek.

“No, I’m scared. You bite,” he said as the nun and pilgrims around her laughed.

After the nun reassured him that no harm would come, the pope said, “I will give you a kiss but be calm; don’t bite.” He then embraced and kissed the nun who thanked him as she bounced up and down with glee.

Continuing his series of talks on the Acts of the Apostles, Pope Francis reflected on St. Paul’s dangerous voyage by sea from Caeserea to Rome as a prisoner of the Roman Empire.

Ignoring the apostle’s dire warning, the Roman centurion escorting him sailed into a raging storm at sea.

However, when “death seems imminent and despair pervades everyone,” Paul encourages those on board to not lose faith, the pope said.

“Even in trial, he does not cease to be the guardian of the lives of others and the animator of their hope,” he said.

After shipwrecking on the island of Malta, the pope said, Paul takes the opportunity to exercise “his ministry of compassion” by healing the sick.

In doing so, the apostle shows that “any person who has experienced a profound liberation becomes more sensitive to the needs of others,” he said.

“This is a law of the Gospel: When a believer experiences salvation, he does not keep it for himself but puts it into circulation,” he said.

Pope Francis said that Paul’s experience proves that “God can act in any circumstance, even in the midst of apparent failure.”

His example also a call to other Christians to show compassion to those who suffer and experience “the frost of indifference and inhumanity” today, he said.

“Let us ask the Lord today to help us to live every trial sustained by the energy of faith and to be sensitive to the many shipwrecked people in history who come to our shores exhausted, so that we too may know how to welcome them with that fraternal love which comes from the encounter with Jesus,” the pope said.

PREVIOUS: How often should I go to confession?

NEXT: Don’t let the devil light ‘fire’ of war in your heart, pope says