About 100 participants with Catholic Young Adults of Chester County listen to a talk by Archbishop Charles Chaput, followed by a question-answer-session, Jan. 21 at SS. Simon and Jude Parish, West Chester. (Photo by Dan McCarty)

The first visit of Archbishop Charles Chaput to the weekly gathering of the Catholic Young Adults of Chester County (CYACC) on Jan. 21 was likely his last as Archbishop of Philadelphia.

Just two days later he introduced his successor to lead the archdiocese, Archbishop Nelson J. Perez, as appointed by Pope Francis that day.

Archbishop Chaput mingled easily with the young adults, offered them a talk and answered their questions at SS. Simon and Jude Church in West Chester.

“We feel honored,” said Kristina Stark, a member of CYACC’s Core Team. “He has a heart for young people.”

The plan for him to spend time with the group had been in the works for the past several months. Given his tight schedule as archbishop of a large diocese, CYACC felt fortunate he could accommodate their request.

“He always makes a point to be present in the community,” said Levi Keene, director of CYACC. “He is just fabulous at trying to meet people where they are.”

Approximately 100 people attended the event and heard Archbishop Chaput begin by talking about ecclesiology, the theological study of the church. 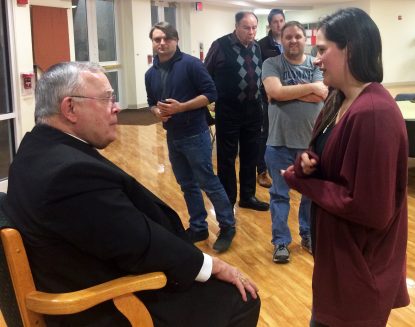 Young adults get ready to chat with Archbishop Charles Chaput during his visit with them Jan. 21 at SS. Simon and Jude Parish, West Chester.

“We believe that God endows each of us personally and uniquely with all our traits,” he said. “He desires to communicate with us. He created us because he wanted to love us and for us to love him in return.”

Archbishop Chaput described a bishop’s job as being is responsible for organizing the community of faithful that is the church. In the early Christian church, the bishop took on all of its responsibilities for governing, sanctifying and teaching the faithful. But as the church grew, he shared those responsibilities with delegated priests and deacons while continuing to oversee them.

“We believe Jesus called the apostles to continue his mission after his resurrection and ascension,” the archbishop said.

Since Archbishop Chaput will be retiring at the Feb. 18 installation Mass of Archbishop Perez, the talk also focused on how a bishop is chosen to lead a diocese and how he resigns due to age.

All bishops must submit a letter of resignation to Pope Francis no later than their 75th birthday. Archbishop Chaput turned 75 last September and submitted his letter at that time. The papal nuncio to a country, akin to an ambassador for the Holy See (in the United States, the nuncio is Archbishop Christophe Pierre), sends letters to the pope on behalf of three potential candidates to lead a diocese or archdiocese.

The pope reads a one-page summary on each candidate before deciding which of the three best fits the needs of that local church. When a bishop-elect accepts his new role, the nuncio contacts his predecessor to inform him of his successor bishop for that diocese.

A selected bishop may decline the offer to succeed a bishop of a particular diocese, and when that happens the whole process starts over again until one bishop ultimately accepts.

Most archbishops have prior experience as bishop of a smaller diocese. Prior to his appointment in Philadelphia, Archbishop Chaput served Denver, Colorado and Rapid City, South Dakota. He now has a total of 31 years in the episcopacy. 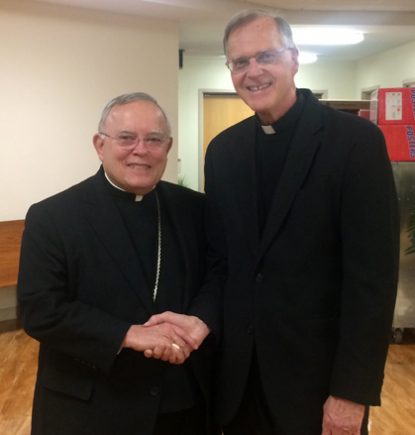 “We believe every bishop he is a successor of the apostles,” he said. “Each one is independent.”

When it was time for questions and answers, John Williams of the Diocese of Allentown was curious as to where Archbishop Chaput will reside when he retires. He replied that he will live at St. Edmond’s Home for Children in Rosemont, a facility of archdiocesan Catholic Social Services that cares for children with intellectual and physical disabilities.

Williams also wanted to know if a woman is receiving a sacrament when she professes her vows as a religious sister, but that is not the case. Priests and deacons receive the sacrament of holy orders, while religious sisters and brothers profess vows in religious life, the archbishop explained.

Elijah Johnson, a missionary at West Chester University, asked how one can strive to put God at the center of one’s life.

“Christ can only be at the center of life if you pray and go to confession,” said the archbishop. “If you marry, you have to marry someone who is authentically Christian.”

Organizers of the evening said it would not have happened without the help of several people including Father Michael Gerlach, pastor of SS. Simon and Jude and parish staffer Marty Harris; Father Christopher Moriconi, secretary to the archbishop; and Levi Keene.

“I thought it was a great talk,” said attendee Paul Whelan. “The archbishop made a ton of great points.”

CYACC next meeting will a eucharistic holy hour with music and Night Prayer on Wednesday, Feb. 5 starting at 7:30 p.m. at St. Agnes Church, 231 Gay Street in West Chester. 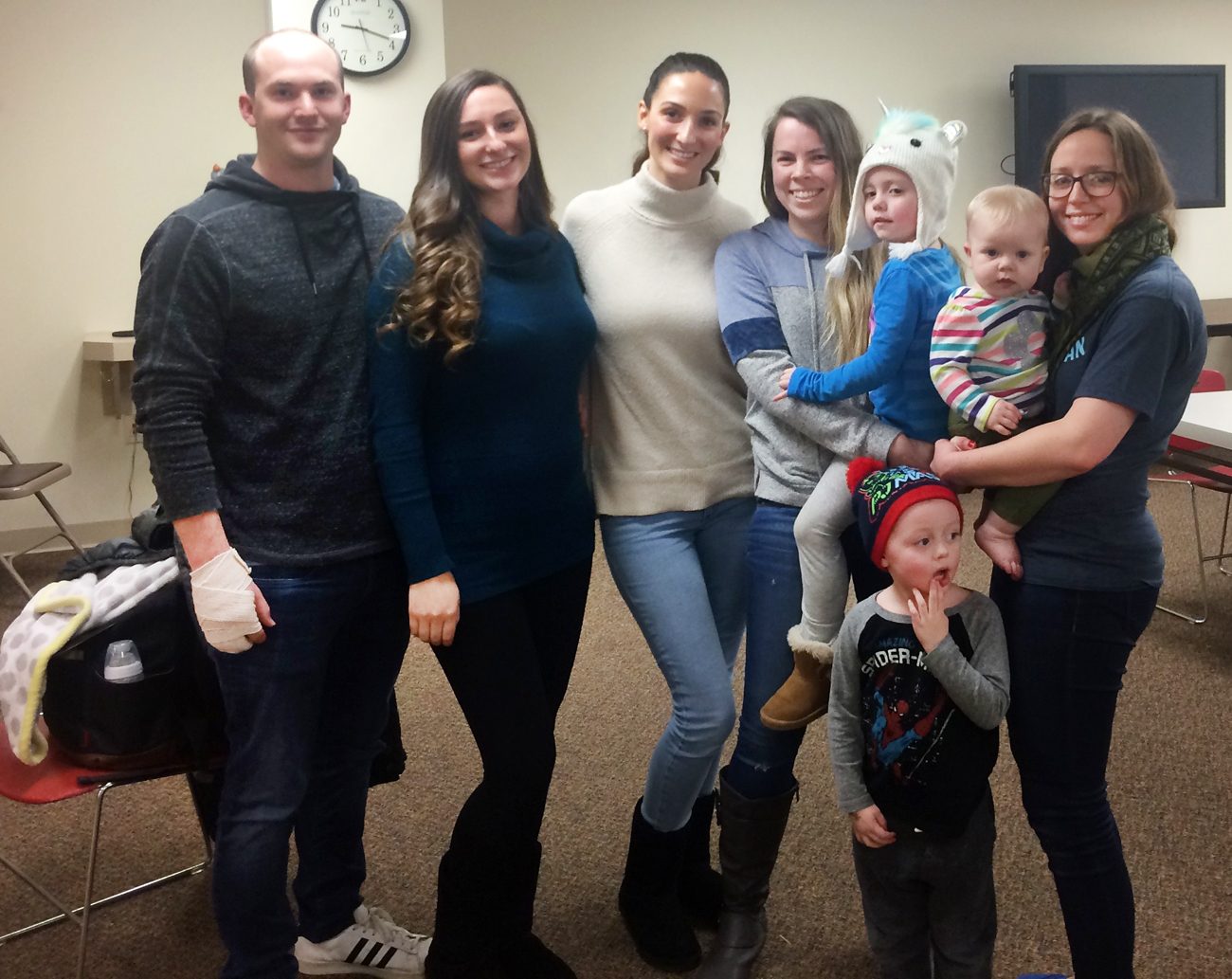 The young and the very young enjoyed the evening with Archbishop Chaput Jan. 21 at SS. Simon and Jude Parish, West Chester.