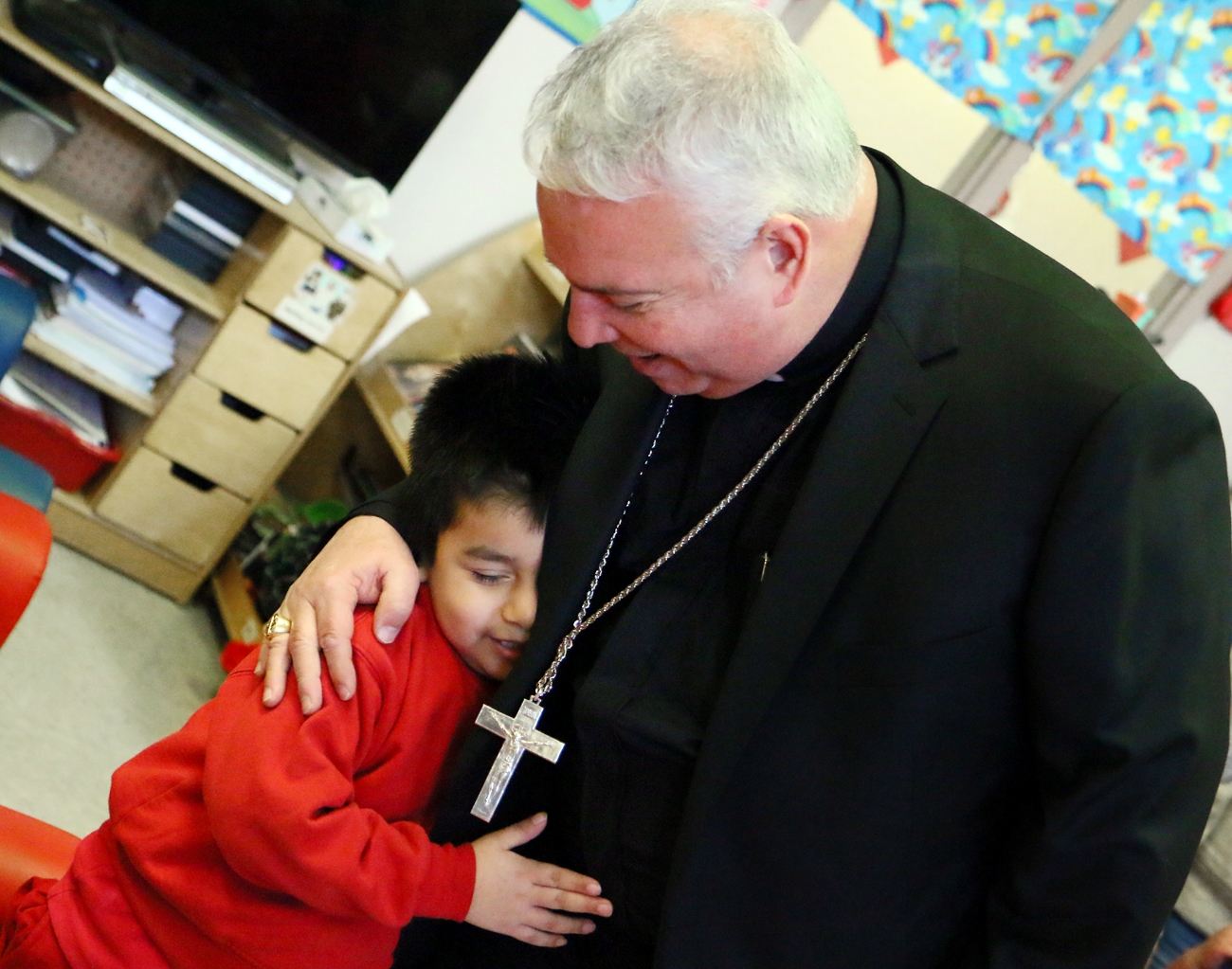 Josh Martinez, a student at the Casa del Carmen Preschool Academy in North Philadelphia, embraces Archbishop-elect Nelson J. Perez during his Jan. 24 visit to the center, an outreach of archdiocesan Catholic Social Services. During his years as a Philadelphia priest, Archbishop Perez worked extensively throughout the site’s largely Latino neighborhood. (Photo by Sarah Webb)

Archbishop-elect Nelson J. Perez said he was “home, home, home” during a visit last week to the North Philadelphia neighborhood where he once worked.

Philadelphia’s next archbishop, who will be installed at a Feb. 18 Mass, took time the day after his appointment was announced to tour Casa del Carmen Jan. 24. The agency of archdiocesan Catholic Social Services (CSS), a beneficiary of the annual Catholic Charities Appeal, provides an array of family support services and accredited early childhood education for the area’s largely Latino residents.

“I worked for 10 years right next door, and I was here when this place was actually blessed and dedicated,” said Archbishop Perez, who had served from 1993 until 2002 as the founding director of the former Catholic Institute for Hispanic Evangelization.

An outreach of the archdiocesan Office for Hispanic Catholics (of which then-Father Perez was assistant director from 1990 to 1993), the center provided faith formation, catechesis and fellowship opportunities after the closure of St. Henry Parish in 1993.

That mission continues today through the Office for Hispanic Catholics, located at the Archdiocesan Pastoral Center in Center City.

“He’s very special, and he’s been in our family for so many years,” said Abigail Negron, smiling as she blinked back tears. “I know him well. He helped my children in their faith and their musical studies, and he guided me and my husband even before we got married.” 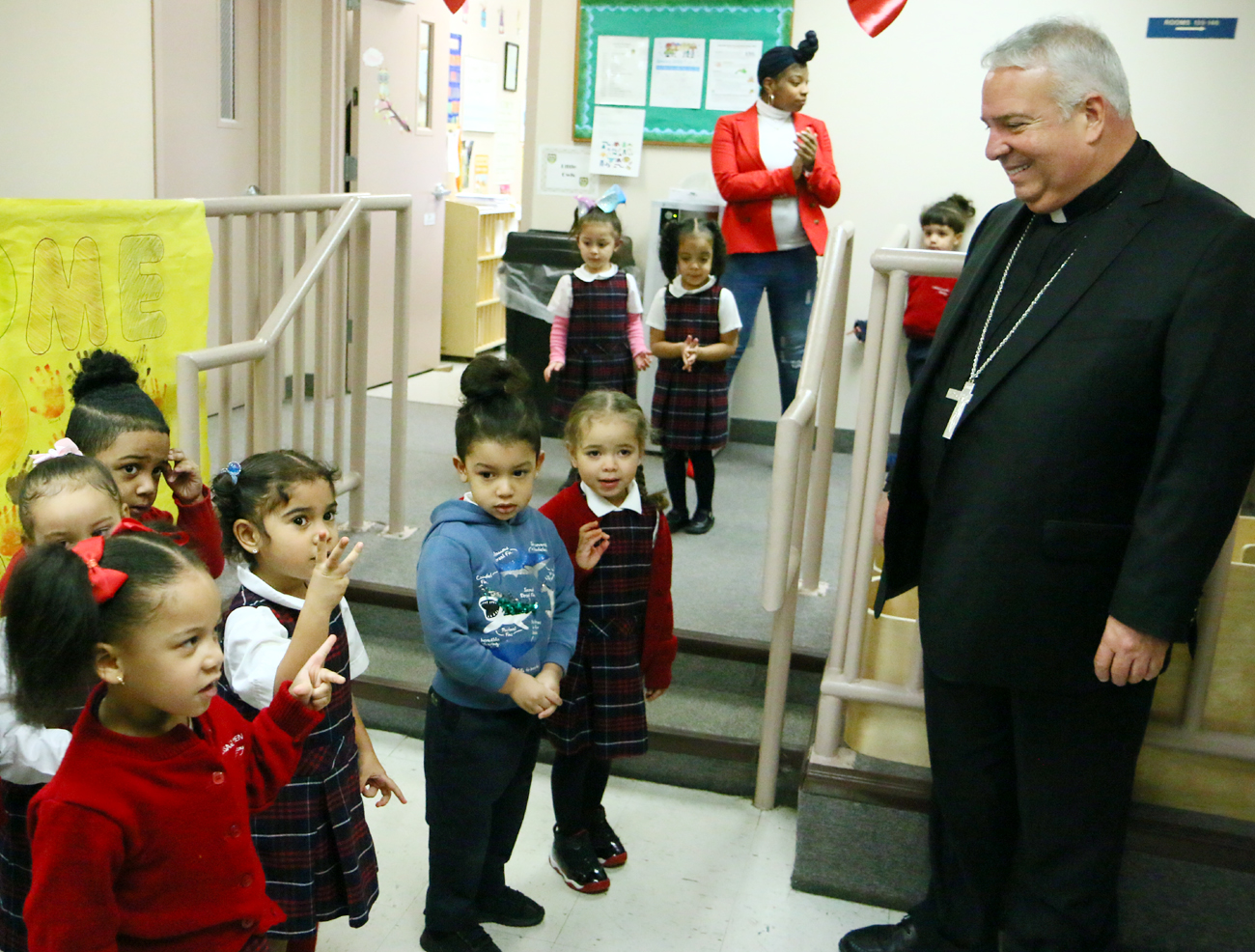 Beatriz Negron recalled that she and her sister had first met then-“Padre Nelson” more than 20 years ago while singing in the choir at St. Ambrose Parish, where he was assigned as a parochial vicar after his ordination.

“Ever since then, we’ve been in contact here and there,” she said. “So it’s been a long time that we’ve known him.”

Archbishop Perez said that the sisters had also sung in the Spanish choir at St. William Parish, where as a monsignor he was pastor from 2002 to 2009.

As local media and well-wishers snapped pictures at Casa del Carmen, he turned to the twins and asked, “How are the kids?”

On entering the building, Archbishop Perez was greeted by the Casa del Carmen Preschool Academy’s 81 students, who sang and presented handmade cards while extending their hands for a “high-five” from the prelate.

On recognizing an instructor who was a former parishioner, he remembered that he had baptized her daughters, who are now ages 16 and 20.

“I’ve only been a priest for 15 years, so I don’t know how that happened,” he joked.

CSS administrators said that the archbishop had a longstanding and deep connection to both the area’s Latino community and to the church’s social service mission as a whole.

James Amato, archdiocesan Secretary for Catholic Human Services, said the appointment of the archbishop – who had previously served on the CSS board – was “of great significance for all Catholics in Philadelphia.”

Casa del Carmen administrator Camille Crane described him as an “icon in the community,” while Amy Stoner, director of CSS’s housing, homeless and community-based services, said it was “exciting” to see the archbishop “come home” to a place that had “a long history of serving the Latino community.”

While fielding questions from local media after his tour, Archbishop Perez said ministries such as Casa del Carmen were examples of “where the church has to be.”

During his exchange with media, Archbishop Perez cited St. John Paul II as his greatest theological influence, along with Pope Benedict XVI, whom he called “the Thomas Aquinas of the last century.”

Their successor, Pope Francis, is “bringing all of that together and taking the church to the level that it’s at now, with the Spirit of God,” he said.

Archbishop Perez also said he had been deeply influenced by St. John Bosco and St. Teresa of Kolkata because of their work with youth and the poor.

Regarding the issue of immigration, Archbishop Perez said the church’s role is to “continue to be a voice for those who don’t have a voice.”

NEXT: Archbishop Perez returns to roots at Casa del Carmen