Blessed for Broad Street at the Mummers Mass 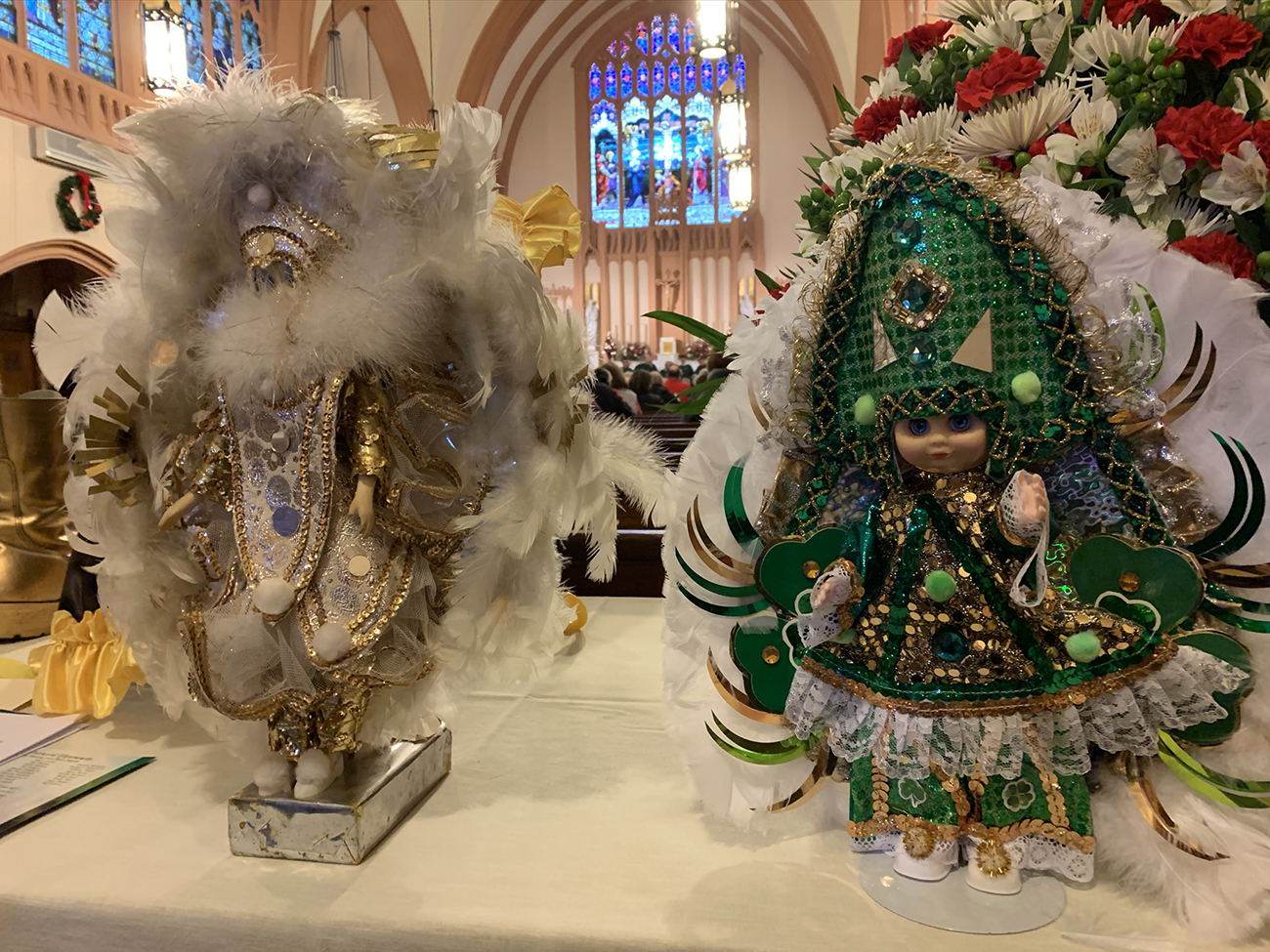 Mummers dolls were placed before the altar at the 31st annual Mummers Mass on Dec. 31 at Our Lady of Mount Carmel Parish in South Philadelphia. The doll on the left commemorates the late Father Thomas Wassel, a former pastor of the parish and Mummers chaplain. (Photo by Gina Christian)

Hours before donning their costumes, Mummers from a number of clubs were blessed for their New Year’s Day strut down Broad Street.

Some 400 Mummers and their supporters gathered for the 31st annual Mummers Mass on Dec. 31 at Our Lady of Mount Carmel Parish in South Philadelphia. The liturgy celebrated the neighborhood’s commitment to the Mummers tradition, while marking the vigil of the Solemnity of Mary, the Mother of God.

“Jesus believed in fun,” said pastor and celebrant Father Francis Cauterrucci, who delivered his homily while wearing a sequined eye mask. “We gather in joyful celebration because we believe in one another.”

According to various estimates, some 10,000 participants typically perform in the Philadelphia parade, which ranks as the nation’s oldest of its kind. The event draws hundreds of thousands of spectators in person and via television.

The city began formally sponsoring the parade in 1901, but the Mummers’ roots extend back to ancient and medieval traditions. Locally, the practice of dressing in costume and acting out short skits during the holidays grew with the influx of European immigrants into Philadelphia. Such performances have historically relied on humor and satire: the word “mummer” itself derives from medieval French and English words for “mask” and “mutter,” and may also be related to the name of the Greek god of ridicule, Momus. Political and cultural references shape many of the performances at Philadelphia’s parade. 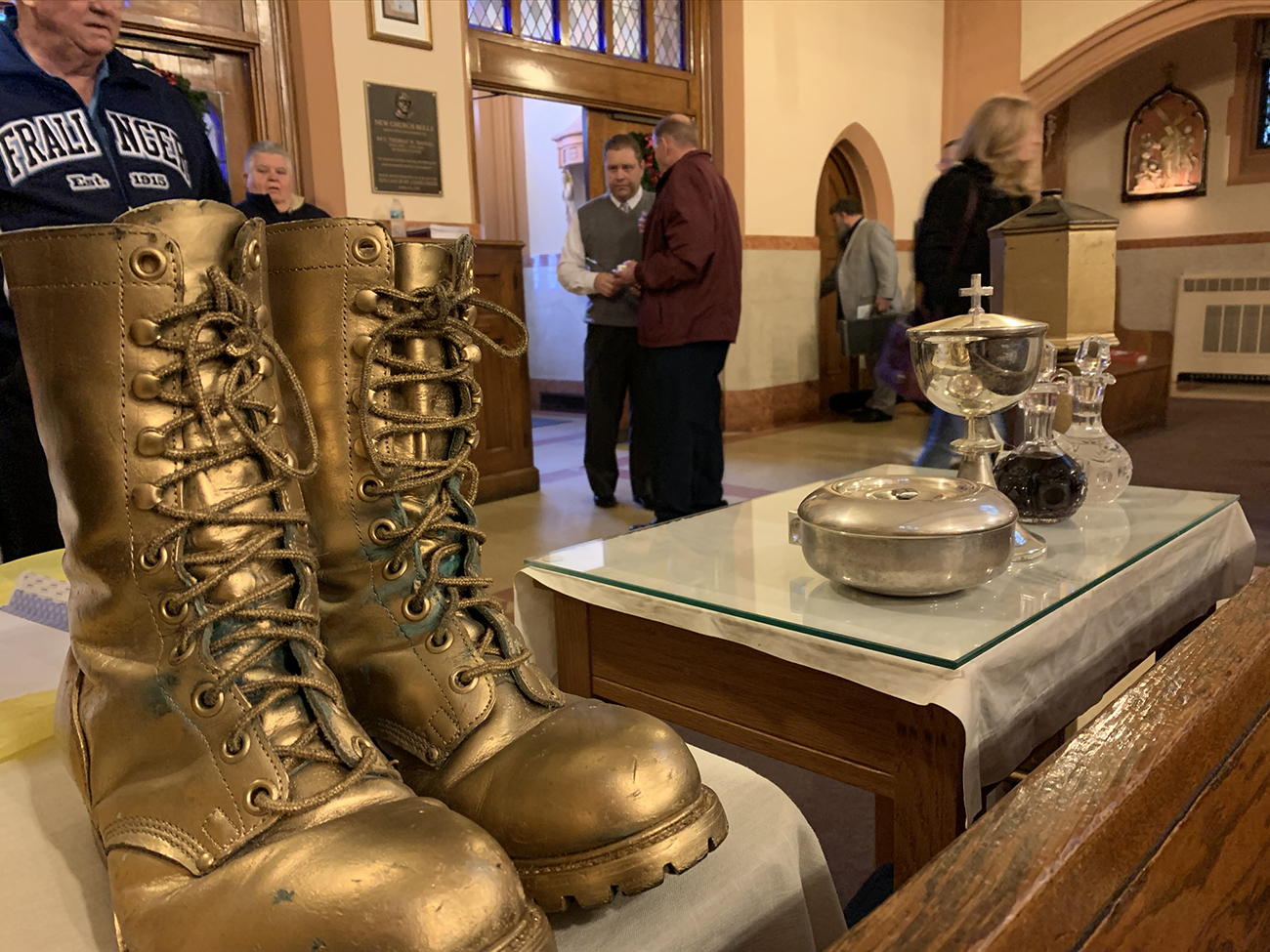 Golden slippers, a symbol of Philadelphia Mummers tradition, await placement before the altar at the 31st annual Mummers Mass, which was celebrated Dec. 31 at Our Lady of Mount Carmel Parish in South Philadelphia. (Gina Christian)

The five divisions of the city’s Mummer clubs – comic, fancy, wench brigade, string band and fancy brigade – were highlighted at the Dec. 31 Mass, which was preceded by a presentation of iconic items from each group. After a prelude by the Mummers Chorus, a stylized umbrella, a set of golden slippers, a banjo, trophies and two Mummers dolls were placed on a table in the sanctuary.

One of the dolls was dedicated to the late Father Thomas Wassel, a former pastor of Our Lady of Mount Carmel and a Mummers chaplain.

Philadelphia’s mummery tradition has deep roots in South Philadelphia’s European immigrant communities and in their Catholic faith, according to the Mummers Museum.

For Fran Kelly, the Mummers Mass affirms that sense of constancy.

“We have the same routine each year at the Mass, including recognizing our deceased members,” said Kelly, a member of the Satin Slipper Fancy Brigade.

The Mass also offsets the intense competition among the clubs, he added.

“It brings us all together,” Kelly said. “We’re friends now and we love each other, but tomorrow, everybody’s out to win.”

Many families have made the Mass part of their New Year’s Eve tradition. Parishioner Noreen Brennan, who has attended the liturgy for the past three decades, brought her eight-month-old granddaughter Marlee to the Dec. 31 celebration.

“It starts off the year well, and we’re keeping the tradition alive,” said Brennan, whose family members perform in both the fancy and wench divisions.

Fellow parishioner Stosh Visack was joined at the Mass by his son Chase, who flew in from his U.S. Navy assignment in Pearl Harbor to attend the New Year’s festivities. For both father and son, the liturgy is mandatory preparation for their big day on Broad Street.

“This is our blessing for tomorrow, so we all stay safe and have a good time,” said the elder Visack, a member of the Riverfront Mummers Wench Brigade. “But first and foremost, we praise the Lord for the New Year and its blessings, and we thank God for everything that went well over the past year.”

Visack added that he wasn’t too worried about the “intricate details” of his brigade’s choreography.

“We just go right to the heart of it,” he said. “Whatever comes out, comes out.”

And that’s exactly the creative freedom that the parade and, more fundamentally, Christ’s salvation brings, said Father Cauterrucci in his homily.

PREVIOUS: Bikers rev up Christmas for teens at archdiocesan home

NEXT: Assignment changes noted for clergy in archdiocese