Bikers rev up Christmas for teens at archdiocesan home 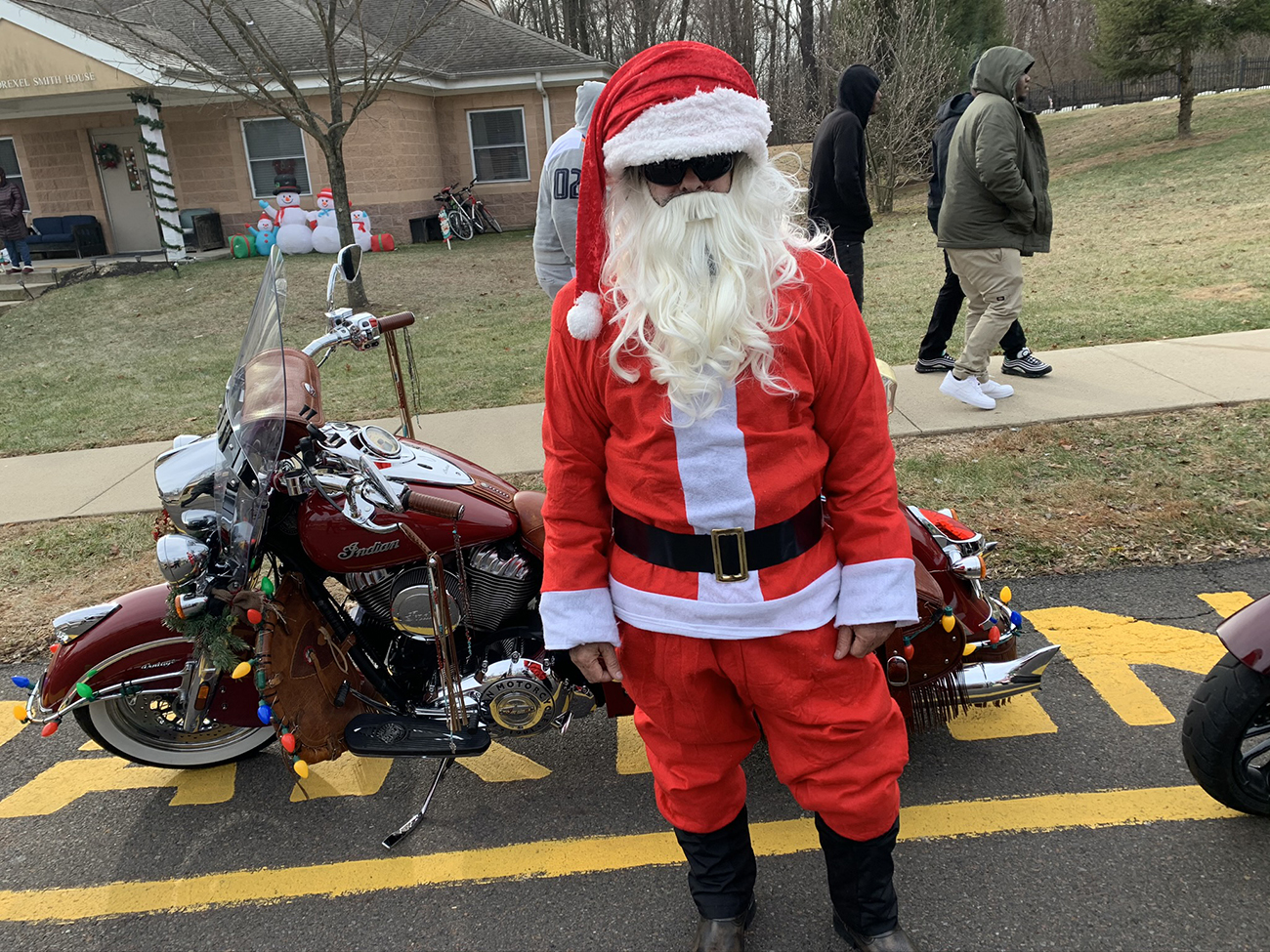 Matt Johnson of Langhorne rode his motorcycle dressed as Santa Claus to deliver toys to youth at the St. Francis-St. Joseph and St. Vincent Homes, an outreach of archdiocesan Catholic Social Services, Dec. 21. Now in its third year, the event was sponsored by the Delaware Valley Iron Indian Riders, who collected more than $2500 in gifts for the teens. (Photo by Gina Christian)

Santa kept the sleigh parked and revved up his Indian motorcycle to make Christmas a bit brighter (and louder) for area kids served by archdiocesan Catholic Social Services (CSS).

On Dec. 21, a half dozen members of the Delaware Valley Iron Indian Riders (DVIIR) braved the 20-degree cold to deliver gifts to the St. Francis-St.Joseph (SFSV) and St. Vincent Homes in Bensalem. Operated by CSS, the homes offer residential and educational programs, as well as case management and outpatient clinical services, for more than 100 dependent and delinquent teens aged 12 to 18.

Now in its third year, the annual ride has become a holiday tradition for the club. DVIIR vice president, Spencer Willhouse, pitched the project as a way of “putting smiles on kids’ faces.”

DVIIR president Steve Willans estimated that the club had collected some $2500 worth of toys and sporting goods.

Willhouse and Willans said that motorcycle riders tend to be generous by nature.

“It’s part of the culture,” said Willhouse. “We want to give back to the community. They put up with us being loud.”

Willans also noted that both the toy run and CSS’s outreach hit home for him.

“I was raised by my grandparents,” he said. “So I know what it’s like to have somebody come along to pick up the slack and look out for you when you think no one else is going to be there.”

Deacon Anthony Willoughby, the spiritual minister of the homes, said that believed this would be “the best Christmas ever” for the homes’ residents.

“All of our donors really stepped up this year, and we’ve actually had them spending quality time with the kids,” said Deacon Willoughby. “They’ve had pizza parties, Eagles’ parties; not just Christmas parties. They’re starting to know the kids.”

Those relationships become even more critical during the holidays, said Deacon Willoughby.

“We’ve become their families,” he said. “They know we care.”

Sixteen-year-old resident Sean, who also rides a motorcycle, was impressed by the club’s bikes, most of which were decorated with Christmas lights and bows.

He said that although one particular motorcycle at the event had caught his eye, “Christmas is about family, not the gifts. I’m looking forward to spending time with my family here at the homes.”

Fellow resident Corey, also 16, agreed that he appreciated any gift, but remained focused on the true meaning of the holiday, which also happens to be his birthday.

“It’s cool to share a birthday with Jesus,” he said.

Matt Johnson of Langhorne, who said he felt “blessed” to be part of the event, said it wasn’t hard to ride his motorcycle dressed as Santa, although occasionally “the hair gets in the way.”

Deacon Willoughby and SFSJ administrator James Logan enjoyed seeing the residents’ surprise and delight as the motorcycles roared up the long driveway.

“If noise had a face, that’s what it would look like,” laughed Deacon Willoughby.

NEXT: Blessed for Broad Street at the Mummers Mass