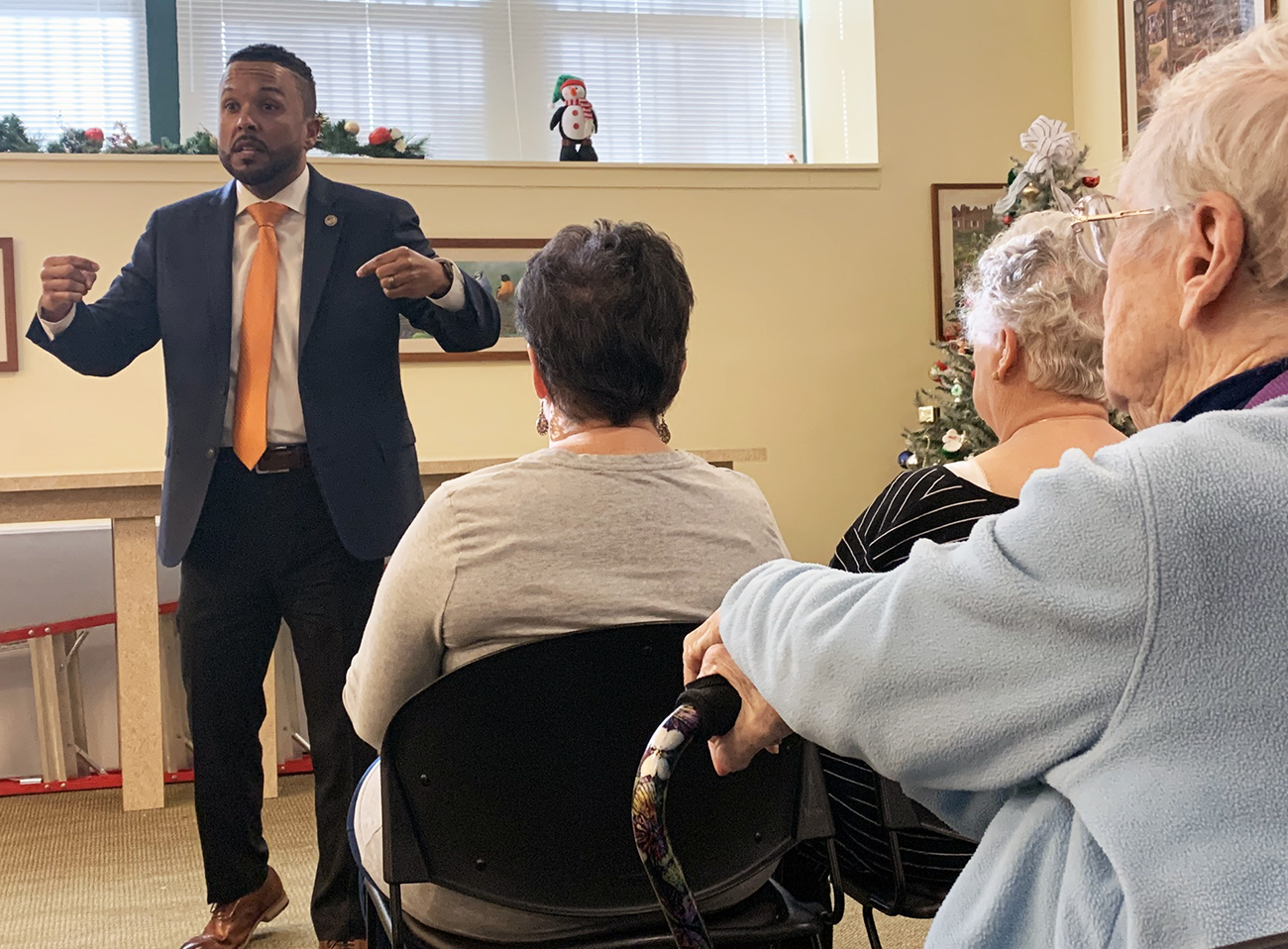 Anthony Luker, an education and outreach specialist with the Pennsylvania Office of the Attorney General, speaks to residents of Nativity B.V.M. Place in Philadelphia on the issue of senior bullying, Jan. 9. (Photo by Gina Christian)

An archdiocesan senior living facility is making its residents aware of a little-known problem among older adults: bullying.

Nativity B.V.M. Place in the city’s Port Richmond section hosted a presentation on the issue Jan. 9 by Anthony Luker, an education and outreach specialist from the Pennsylvania Office of the Attorney General. The talk was attended by some 25 residents of the facility, which is one of five affordable senior housing sites operated by the Archdiocese of Philadelphia’s Catholic Housing and Community Services (CHCS) agency.

Usually associated with schoolyards and on social media, bullying has become increasingly prevalent among seniors, he said, with an estimated 10% to 20% of older adults experiencing some form of intimidation or exclusion from their peers.

Luker stressed that senior bullying should not be confused with elder abuse, which entails caregivers’ harmful actions to, or neglect of, older adults. Rather, senior bullying consists of “targeted, malicious and repeated” actions among peers.

Nativity B.V.M. resident Kathleen Rago was unfamiliar with the term prior to the talk, but speculated that such actions could include “someone threatening you with their cane or blocking you with their wheelchair or walker.”

While studies have examined bullying among children since the 1970s, Luker said that more research is needed to draw attention to the problem among seniors.

At the heart of the issue, he said, is the need to recognize that “all space is shared space, and that we all deserve to be here.”

“We are all part of the human race, and none of us reserves the right to mistreat others,” said Luker.

Older adults who have been accustomed to living independently for decades may find it challenging to share space with others in a communal setting such as a senior living facility or an activities center, Luker noted.

In addition, he said, a host of personal issues can impair a senior’s ability to interact productively with others.

“We never know on a given day what someone’s struggle might be – they may have had their gas turned off, or they may be struggling with an illness,” he said.

To counter senior bullying, Luker suggested a number of practical strategies, such as creating a “kindness tree.” The activity pairs participants with a different individual each day, inviting them to list a positive quality about their assigned person. The results are then reviewed and reflected upon at the end of the week.

Above all, Luker said, older adults – like their younger counterparts – should develop self-awareness and compassion.

“Sometimes we get so trivial, and we allow rumors and gossip to tear at our communal fabric,” he said. “But all of us are on borrowed time, and we have to challenge ourselves to live in harmony.”