Deaf faithful pray the Mass in their own tongue, ASL 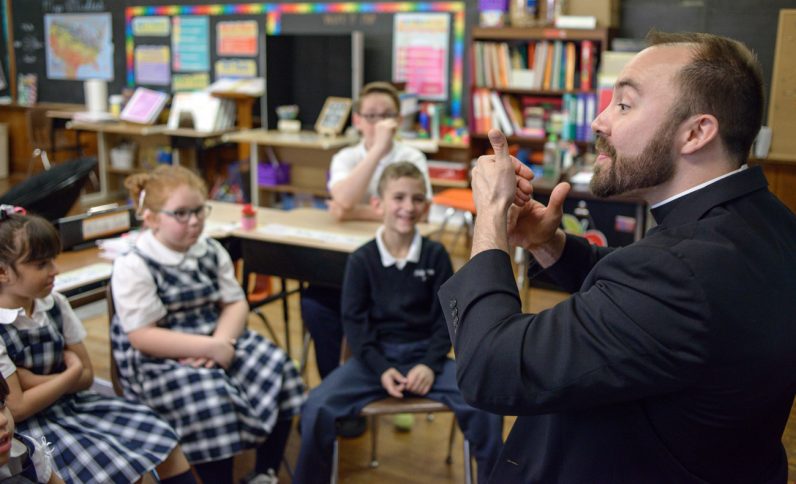 Father Sean Loomis, priest coordinator for the Deaf Apostolate of the Archdiocese of Philadelphia, teaches a lesson in American Sign Language to a class of students at Archbishop Ryan School for the Deaf, an archdiocesan school of special education supported by the Catholic Charities Appeal.

Back in the old days before Vatican II, the common concept of the holy sacrifice of the Mass was the priest “said Mass” and the congregation “heard Mass.” Now in a more inclusive era we usually say the priest “celebrates Mass” and the people “participate at Mass.”

Today the Catholic liturgy is more participatory and no longer largely conducted in Latin, a foreign language that most of the congregation did not understand. While there are a small number of Catholics who prefer the Latin Mass, the vast majority are happier with a Mass in their native tongue or at least in a language they understand.

There is one group that has been largely left out of that change, and that is the Deaf Community, especially those who were born deaf and never experienced hearing. Their native tongue in this country is American Sign Language.

There are few places where they can experience Mass in ASL, if for no other reason than their community is relatively small and very few priests know their language. Usually it is a priest celebrating and preaching in English with a hearing interpreter translating it into ASL.

In the Philadelphia Archdiocese the Deaf Apostolate has been served by what is now Archbishop Ryan School for the Deaf since 1912, and more recently the Office for Persons with Disabilities and the Deaf Apostolate under Immaculate Heart Sister Kathleen Schipani. 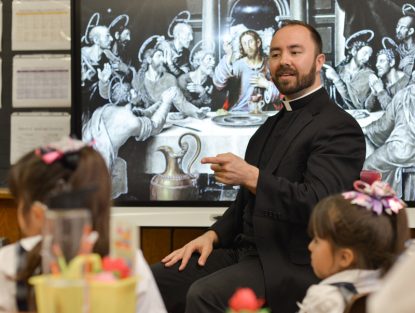 Mass in ASL is celebrated by two priest chaplains, Msgr. Paul Dougherty at St. Margaret in Narberth and the chaplain/coordinator of the apostolate, Father Sean Loomis at Annunciation B.V.M. in Havertown. They are assisted by Deacon William Griffin, a permanent deacon who is deaf.

None of the congregations is large, but that is not the point.

Father Loomis, who was ordained in 2013, began studying ASL early in his seminary years. Very quickly he was taken by it.

ASL is not simply a translation of English into hand symbols. It is itself a distinct language. It traces back to the sign language devised by Abbe Charles Michel de l’Epee in 18th century France.

Members of the Deaf Community who were born deaf consider ASL, not English, their native language. Also, Father Loomis explained, they do not consider deafness a handicap but rather a distinction of their culture.

“If you think about the Incarnation, it is God meeting us where we are so that he can communicate with us,” he said. “If they are not running to the church, the church must run to them.”

Because ASL is their native tongue they prefer translations directly into it rather than translations of a spoken language into print by the use captions or other means, according to Father Loomis.

While he does not know the precise number of deaf persons in the Philadelphia area, he does know they are largely unchurched. A possible reason is most church services in almost any denomination are conducted through audible prayer — preaching and music and are sound-oriented.

“All the church can do is work with the Deaf Community in a way they feel comfortable,” Father Loomis said.

He, Msgr. Dougherty, Sister Schipani, Deacon Griffin and an army of volunteer ASL interpreters are doing just that. 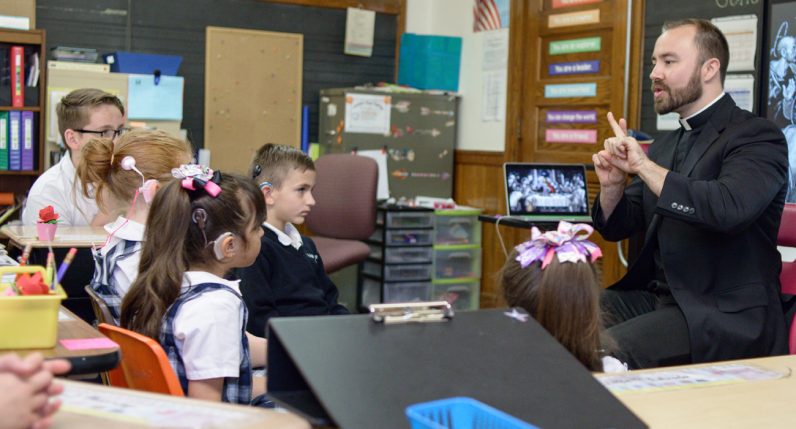 Father Sean Loomis, priest coordinator for the Deaf Apostolate of the Archdiocese of Philadelphia, teaches a lesson in American Sign Language to a class of students at Archbishop Ryan School for the Deaf, an archdiocesan school of special education supported by the Catholic Charities Appeal.

PREVIOUS: Composer, pianist gives ‘100% credit to God’ for her gifts

NEXT: For Deaf Catholics, new videos teach richness of faith