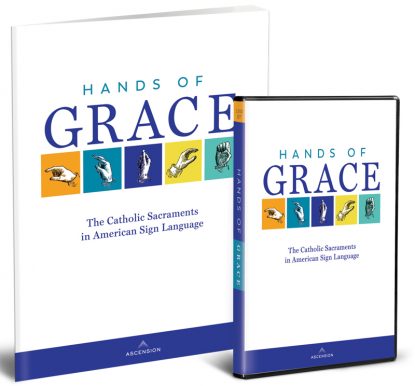 “Hands of Grace” is a new video resource of Catholic catechesis on the sacraments by Ascension Press, developed with Father Sean Loomis of the Archdiocese of Philadelphia’s Deaf Apostolate.

The roughly 5.4 million Americans who are deaf or hard of hearing are part of a distinct community with its own culture and language — American Sign Language — yet one that is little exposed to the Catholic faith.

Among them English is a second language. Because most Catholic faith formation resources are written and spoken in English, an estimated 95% of the Deaf Community has no association with the Catholic Church, according to Father Sean Loomis, chaplain of the Archdiocese of Philadelphia’s Deaf Apostolate, which is supported by the annual Catholic Charities Appeal.

“We haven’t included them in the new evangelization,” he said. “They don’t have the resources.”

But he is working to change that through his partnership with West Chester-based Ascension Press and a new video series on the Catholic sacraments titled “Hands of Grace.”

The DVD series presents a total of 21 videos in which each of the seven sacraments are explained in three segments, each between six and 10 minutes in duration.

The videos utilize American Sign Language (ASL) with graphics and closed captioning, and include a video glossary of Catholic signs in which Father Loomis finger-spells key words in ASL.

For the Deaf Community, learning normally takes place visually. Therefore the term “hearing the voice of God” has no meaning but the concept of “seeing the face of God” has great significance and represents an opportunity for the church to meet deaf people where they are – but with the powerful tools of today’s digital age.

(Watch a promotional video for “Hands of Grace” below)

“It’s a community with its own culture,” Father Loomis said, offering the challenge for church leadership: “How do we make Jesus incarnate in that culture? This (series) is a step in the right direction.”

He noted that children of the Deaf Community ask such pointed questions as, “Does God know sign language? Does he understand me?”

The “Hands of Grace” resources show that “God comes to them as they are,” Father Loomis said.

In addition to the videos, which convey the church’s teachings on the sacraments and the graces received from them, a “Hands of Grace Participant’s Guide” includes prayers, image and discussion questions, quotes from the Catechism of the Catholic Church and Catholic saints, plus invitations for participants to deepen their faith.

The series and its materials are unprecedented as a resource for Catholic catechists ministering in the Deaf Community, according to Sister Kathleen Schipani, I.H.M., director of the archdiocesan Office for Persons with Disabilities and the Deaf Apostolate.

The need for Catholic outreach and evangelization of the Deaf Community is not merely a challenge for the church but also one of inclusion for the wider society.

The lack of sensitivity to people who communicate primarily through ASL not English, and via visual not oral means, can leave the Deaf Community feel like strangers in their families, their neighborhoods and in their churches.

“They are the forgotten children of society,” Father Loomis said.

He likens their experience to that of a person speaking only English in a family, neighborhood and church where only Russian is spoken, all available information serves Russian speakers exclusively and even videos have no sound but offer text scrolling at the bottom – all in Russian.

“How would you feel?” Father Loomis wrote in a recent blog post. “How would you feel if the church’s ‘best’ meant you needed to strain under the burden of a second language, sift through cultural nuances meant for a different people, and constantly alternate between looking at the visuals and reading the script, every time missing a piece of each? How many people would persevere under this model of catechesis? By now, the answer should be clear: few to none at all. And yet this is the experience of every Deaf Catholic.”

Many Protestant Christian churches have developed significant outreach and faith formation efforts, even leading to the rise of all-Deaf churches, prison ministries, partial Bible translations and Scripture studies, according to Father Loomis.

But they are “all absent of the richness of Catholic belief and history,” he said.

“By stark contrast, the National Catholic Office for the Deaf lists as a catechetical resource only one video series focused on the sacrament of confirmation. The Deaf Apostolate for the Archdiocese of Philadelphia released the Religious Sign in American Sign Language (mobile) app, the first of its kind, but even that only occurred within the last couple years.”

For this reason members of the Deaf Community “have largely abandoned their Catholic faith or never received it at all,” said Father Loomis, adding it is a phenomenon exacerbated by the current decline of religious affiliation in American culture.

That culture prides itself on “technological accomplishments and inclusive diversity,” he said, yet “the Deaf Community seems left behind.”

The Catholic Church’s mission is to tell the Good News of salvation through Jesus Christ to all people, in every place and time, and Father Loomis views “Hands of Grace” as “a step toward giving the deaf the recognition they deserve in our culture.”

Deaf persons can learn the Catholic faith “through the church’s visual heritage” of sacred art and visual presentations of the holy model of saints and wisdom of church teaching to “expose them to things they don’t know about,” Father Loomis said. “This experience is rare for them.”

PREVIOUS: Deaf faithful pray the Mass in their own tongue, ASL

NEXT: Local faithful with loved ones in Puerto Rico call for prayers