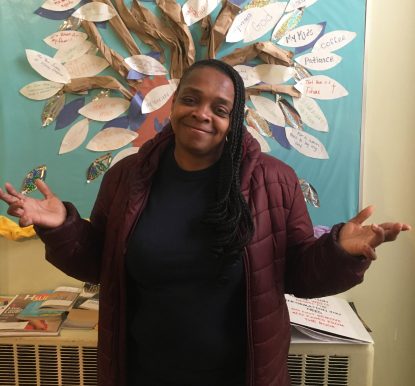 After 37 years of homelessness, Bernadette has spent the past six months in residence at Mercy Hospice, an outreach of archdiocesan Catholic Social Services that assists women in recovery. Now in the process of starting college and securing her own apartment, Bernadette said that moving into the hospice helped her acquire the skills needed for reshaping her life. (Courtesy of Nicole Wakeman)

Bernadette now sleeps well at night — which for the 54-year-old is important, since she’s been getting up early to attend her first semester of classes at Community College of Philadelphia.

That’s quite different from the schedule she kept during the 37 years she lived on the streets of North Philadelphia.

“I used to sleep in vacant cars at garages,” she said. “As long as I could get inside, lock myself in and pull the windows up, that was cool, except it was hard in summer. I’d be burning up.”

Since August 2019, Bernadette (who asked CatholicPhilly.com to withhold her last name) has resided at Mercy Hospice, a ministry of archdiocesan Catholic Social Services (CSS) and a beneficiary of the Catholic Charities Appeal.

While the link between homelessness and addiction is well established, “the issue of homelessness and female drug and alcohol abuse has been relatively ignored,” wrote University of Tennessee criminologist Tammy S. Garland in an August 2019 paper.

Garland added that “substance abuse among women and girls places them at a heightened risk” for homelessness – something Bernadette can confirm.

“I started out at 17 as a social user of drugs,” she said, adding that she experimented with marijuana, alcohol and PCP among other substances.

Her drug of choice ultimately became crack cocaine, and to support her habit she began stealing from her mother, who eventually put her out of the house. For a time Bernadette stayed with various friends; by age 18, she was without shelter.

“I just ran the street until I passed out,” she said.

Her addiction “tied in with a lot of incarceration and illegal activities” such as selling drugs, shoplifting and prostitution, she said.

Sometimes she engaged in criminal behavior “just to eat,” she added, noting that she would also feed on items “out of the trash.”

The harsh conditions of the street, combined with the toxic effects of illegal drugs, took a toll on her health. She developed painful neuropathy and arthritis; the medicines provided free of charge by Temple University Hospital’s emergency room were often stolen from her.

“My entire life has changed,” she said.

The hospice, which took in 124 women and 19 children last year, focuses on restoring clients’ physical, mental, emotional and spiritual health. More than half of its residents come directly from inpatient treatment, another 11% from prison.

The average length of stay is seven to eight months, after which clients seek independent or group housing. Many are successfully reunited with their families.

“I realize I have a choice now, and I choose to live differently,” she said. “I used to let everything around me dictate my day, with everybody around me drinking, smoking and getting high.”

A full schedule doesn’t leave room for self-destructive habits, Bernadette said, adding that she believes “idle time is a no-no.”

“My joke is that my addiction is chasing me, and I will not be caught,” she said. “Watching television is nice for a minute, but you’ve got to keep it moving.”

Although busy, she remains grounded in a renewed sense of self-worth and feels “accepted and welcome” at the hospice.

In a few weeks Bernadette plans to leave Mercy for her own efficiency apartment and an eventual career in helping others recover from substance abuse.

She said she knows from experience that “being in a different environment” at Mercy, along with her own determination to succeed, have radically reshaped her life.

“Moving here was the best thing that could ever happen to me,” she said.

PREVIOUS: Want to help others? Go to a Sixers game

NEXT: Thousands of area faithful ready to March for Life