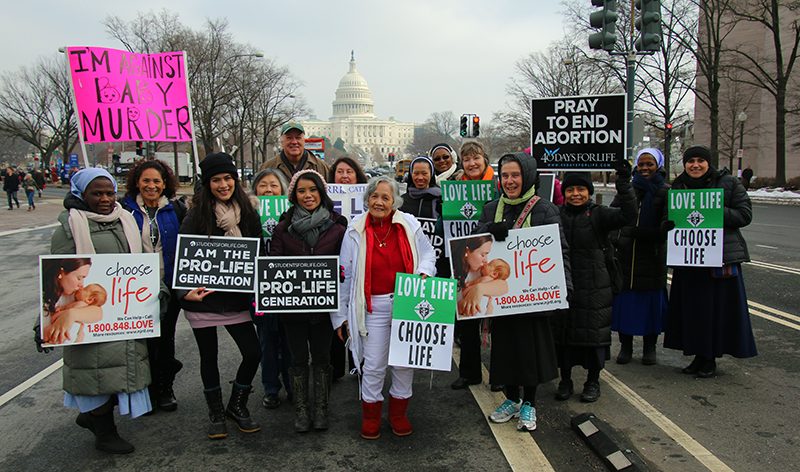 Participants in the 46th annual March for Life gather several blocks in front of the U.S. Capitol, Jan. 18. Some 3,000 Philadelphia-area participants from an array of archdiocesan schools and parishes are expected to participate in this year’s march, which will take place on Jan. 24. (Photo by Marc Cordero)

More than 3,000 Catholics from the Philadelphia region are expected to take part in the 2020 March for Life, which will be held Friday, Jan. 24 in Washington, D.C.

The annual pro-life demonstration marks the anniversary of the U.S. Supreme Court’s 1973 Roe v. Wade and Doe v. Bolton decisions that legalized abortion in all 50 states.

Founded in 1974 by attorney Nellie Gray, the national gathering has evolved over the past 47 years to include numerous presentations and prayer services starting on Jan. 23 at various locations throughout the nation’s capital.

Participants then will proceed down Constitution Avenue to the front steps of the U.S. Supreme Court. Event organizers are encouraging attendees to conclude the march by visiting their elected officials in the U.S. House of Representatives and the Senate.

Over the past few years, estimates of the march’s attendance have ranged from tens of thousands to as many as 200,000. Steven Bozza, director of the Archdiocese of Philadelphia’s Office for Life and Family, predicts next week’s demonstration will be one of the largest ever.

That’s because an increasing number of youth and young adults have “taken ownership” of the pro-life movement, he said.

As one example, Bozza pointed to the insight of many leaders in the pro-life movement that young people possess respect for unborn children because they’ve grown up seeing them — wide access to ultrasound images in recent years has meant that children see photos of their unborn brothers and sisters on the family refrigerator.

“These kids go this march because they want to,” he said, noting that some 80 students from the area will also attend the post-march National Pro-Life Summit on Jan. 25, thanks to a grant from Students for Life of America.

The march and its accompanying events serve as a “tremendous source of encouragement” for those seeking to reverse legalized abortion on demand in the U.S., said Bozza.

“It rekindles hope and inspires an ability to rely on grace” in promoting pro-life outreaches, he said.

Christian spirituality has historically been central to the March for Life. Gray (who ultimately dedicated herself full-time to organizing the march until her death in 2012) was an adult convert to Catholicism, and often stressed how her faith informed her work.

Since 1979, a vigil Mass, a National Rosary for Life and an all-night prayer vigil have been offered on the eve of the march at the Basilica of the National Shrine of the Immaculate Conception in Washington, D.C.

This year, the 5:30 p.m. vigil Mass will be celebrated in the basilica’s Great Upper Church by Archbishop Joseph Naumann of Kansas City, who chairs the U.S. bishops’ Committee on Pro-Life Activities. The subsequent prayer vigil will include opportunities for the sacrament of reconciliation, along with the rosary for life and various holy hours throughout the night.

Some 125 seminarians from St. Charles Borromeo Seminary in Wynnewood will lead the holy hour from 1 to 2 a.m.

The following morning, they will join Philadelphia pilgrims from parishes, Catholic elementary and high schools, and area colleges at a 10 a.m. Mass in the Great Upper Church of the basilica. Bishop Daniel E. Thomas of Toledo, a Philadelphia native, will serve as homilist at the liturgy.

After the Mass, pilgrims will travel — most via Washington’s Metro subway trains — to the rally, which will feature a convenient new meeting point for the Philadelphia pilgrims, said Bozza.

During a site visit several months ago, Bozza identified the Smithsonian’s Castle building, located near Jefferson Drive and 12th Street, as a more “user-friendly” spot for organizing the Philadelphia pilgrims, who will march behind the archdiocesan banner that will be carried by St. Charles Borromeo seminarians.

“It’s bigger and better situated, and it’s close to a concession stand with restrooms,” he said.

Bozza and his team also purchased additional banners to help pilgrims stay together while navigating within the large crowds.

Logistical challenges can make participating in the March for Life somewhat daunting and definitely sacrificial, said Bozza, but the gathering is “rejuvenating.”

“It instills hope, and it helps us not to lose heart,” he said. “It’s a public witness to life.”

Below are details regarding key events and meeting places at the 2020 March for Life, as well as parish bus trips to the march. For additional assistance in identifying an area bus trip to the march, visit phillycatholiclife.org or contact the archdiocesan Office for Life and Family at 215-587-0500 or at cdoughty@archphila.org.

Schedule of key events for the 47th annual March for Life in Washington, D.C.

Archdiocese of Philadelphia March for Life meeting place
After Mass, Philadelphia pilgrims are asked to meet at the Smithsonian Castle building, located at 1000  Jefferson Drive Southwest, Washington, DC 20560. If traveling by Metro, take the Orange, Blue or Silver lines to the Smithsonian stop.

The march will follow the rally at approximately 1 p.m. and will proceed along Constitution Avenue to the steps of the U.S. Supreme Court at 1 First Street Northeast, Washington, DC 20543.

St. Joseph Parish (332 Manor Avenue, Downingtown): Two buses sponsored by the Knights of Columbus will depart from the parish parking lot at 6:30 a.m.

Resurrection of Our Lord Parish (Castor and Shelmire Avenues, Philadelphia): Sponsored by the Philadelphia Chapter of the Knights of Columbus. Departing 6 a.m. with a second stop at St. Francis Xavier Parish (24th and Green Streets) at 7 a.m. $35 per person. Contact: Nick Marcantonio (chapter secretary) at nickpgk61@yahoo.com.

Shrine of Our Lady of Czestochowa (654 Ferry Road, Doylestown): Meeting time at 7 a.m. after 6:15 a.m. Mass in the chapel. Suggested donation for bus seat; checks can be made payable to Czestochowa Shrine with “PROLIFE” in note and mailed to the shrine at P.O. Box 2049, Doylestown, PA, attention: Helena. Contact the shrine at 215-345-0600.

PREVIOUS: Once sleeping in cars, she’s now heading for college