The Archdiocese of Philadelphia’s role in the long-running drama over St. Laurentius Church has ended, and the question of how to reuse the ornate 19th century structure for a secular purpose — and prevent it from collapsing into the street — will be taken up by a new player.

The sale of the church to 1600 Berks LLC went to settlement Jan. 13, ending the archdiocese’s saga concerning the fate of the church in the Fishtown section of Philadelphia.

St. Laurentius Parish was founded in 1882 as the first of several Polish national parishes in the archdiocese.

The stone church, which was dedicated in 1890, features 150-foot twin spires and it immediately became a neighborhood landmark — and the interior was equally beautiful.

But by July 2013 few Polish Catholics in the parish remained and it was merged with the territorial Holy Name of Jesus Parish located little more than a block away.

It had deteriorated to the point that it would have been more costly to renovate the church, estimated at about $2 million, which was beyond the means of Holy Name Parish, than to tear it down at a cost of $700,000.

At that time an independent group consisting of former parishioners calling themselves the Faithful Laurentians successfully won historic certification for the church building from the Philadelphia Historic Commission.

That made it practically impossible to tear the church down even though city building inspectors found serious structural problems that would have to be addressed if it were ever to be used.

Meanwhile hearings of the city’s Historical Commission and Zoning Board ensued, along with lengthy court battles over zoning, and discussions with neighbors and a buyer planning redevelopment of the church into apartments all dragged out over the next six years. And the church crumbled further still.

Finally in February 2019, a Pennsylvania Commonwealth Court opinion quashed an appeal of an earlier decision against the Faithful Laurentians, paving the way to redevelopment of the church.

The completed sale of St. Laurentius Church to 1600 Berks LLC, a Pennsylvania firm that according to published reports is owned by New Jersey developer Humberto Fernandini, means that the reportedly $135,000 spent last summer by the Philadelphia Archdiocese to stabilize the church’s façade and prevent its tragic collapse was money wisely spent.

The new buyer reportedly intends to transform the church into offices and consult with engineers over whether its imposing twin towers can yet be saved. 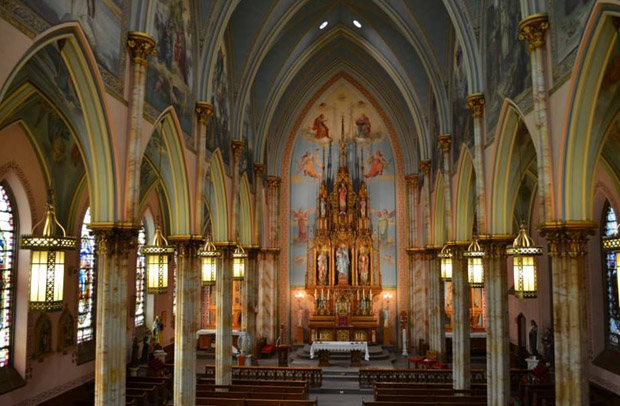 The interior of St. Laurentius Church, closed since 2014 and sold in January 2020. (Facebook)

PREVIOUS: Thousands of area faithful ready to March for Life

NEXT: Catholic Charities Appeal ‘gives hope to all’ in 2020