We’re all called to ‘tell the story about Jesus,’ evangelizer says 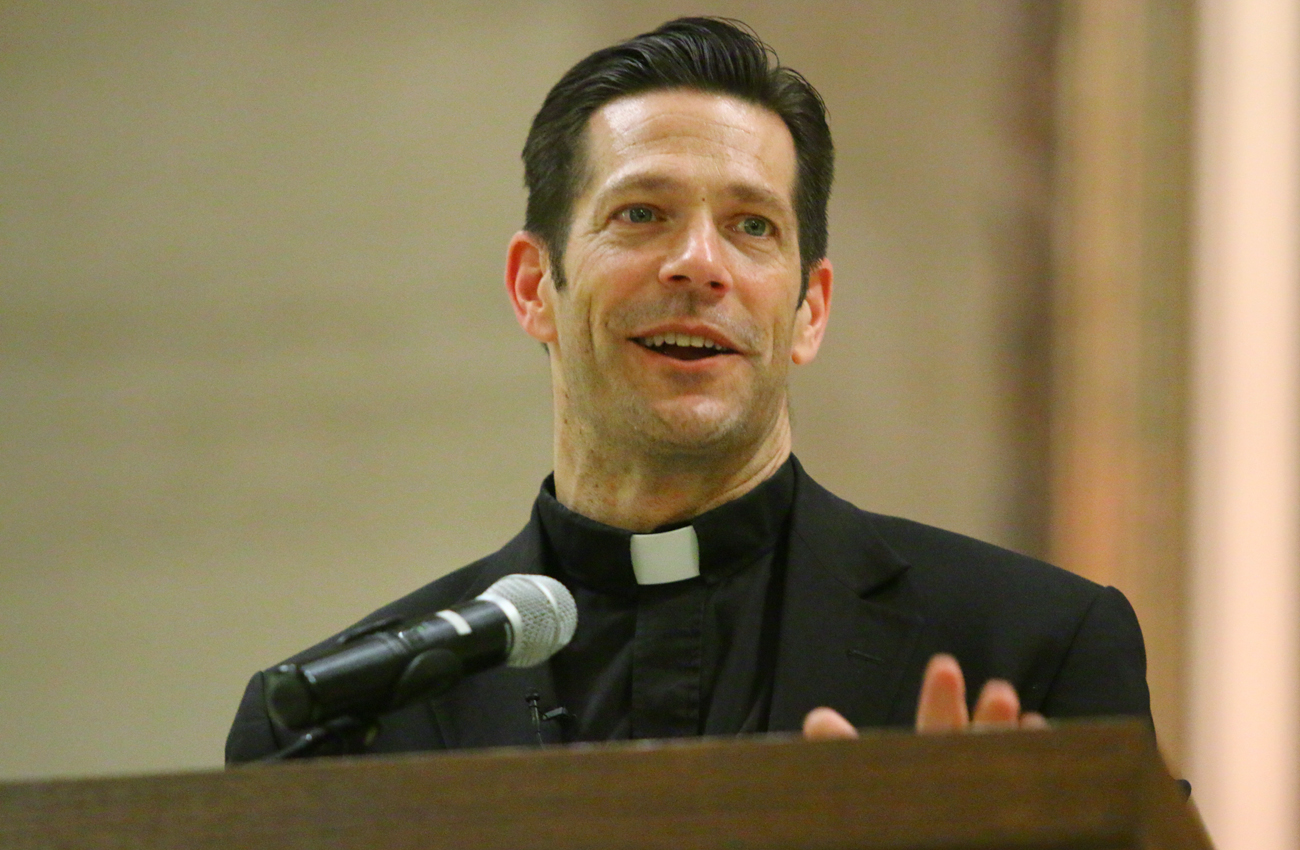 During a Jan. 27 lecture at St. Charles Borromeo Seminary in Wynnewood, Father Mike Schmitz — a youth minister, Catholic chaplain and popular speaker — stressed that all of the faithful are called to spread the Gospel by virtue of their baptism. (Photo by Sarah Webb)

The heart of evangelization is simply “telling the true story about Jesus,” a popular Catholic speaker told a rapt audience Jan. 27 at St. Charles Borromeo Seminary in Wynnewood.

Father Mike Schmitz, whose YouTube videos have notched almost 2 million views, shared his insights on digital preaching at the seventh annual “Cardinal Foley Lecture on the Church and Social Communications.”

The event drew some 400 attendees, including a number of young adults and seminarians.

The crowd was an ideal one for Father Schmitz, who serves as both director of Youth and Young Adult Ministry for the Diocese of Duluth and Newman Center chaplain at the University of Minnesota at Duluth.

Most of those in the audience, however, knew Father Schmitz through his videos and podcasts, which are produced by Ascension Press through its Ascension Presents platform. The multimedia approach enables him to explore a wide range of topics, from prayer and vocational discernment to tattoos and transgenderism, in an up-to-the-minute, conversational format.

The segments’ popularity came as a surprise to the energetic priest, who confessed that he’d never set out to become a social media preacher – or to deliver a lecture.

“I give stern talkings-to, but not lectures,” he joked at the start of his remarks.

Only two years after his ordination Father Schmitz was assigned to campus ministry in 2005, and shortly thereafter a student asked permission to record his homilies and share them with classmates. More students were drawn to the project and eventually the recordings caught the attention of executives at Lighthouse Catholic Media and Ascension Press.

Admitting that he “just (hits) record and (uploads)” his talks, Father Schmitz stressed that all Catholics, by virtue of their baptism, are meant to share the Gospel with others.

Citing St. Paul VI’s Evangelii Nuntiandi, Father Schmitz said that “no one here needs to wait for permission” to speak to others about Christ.

When asked for advice on how to become a Catholic speaker, he typically responds by saying, “Get baptized and start talking,” since “God wants to use people who make themselves available to him.” 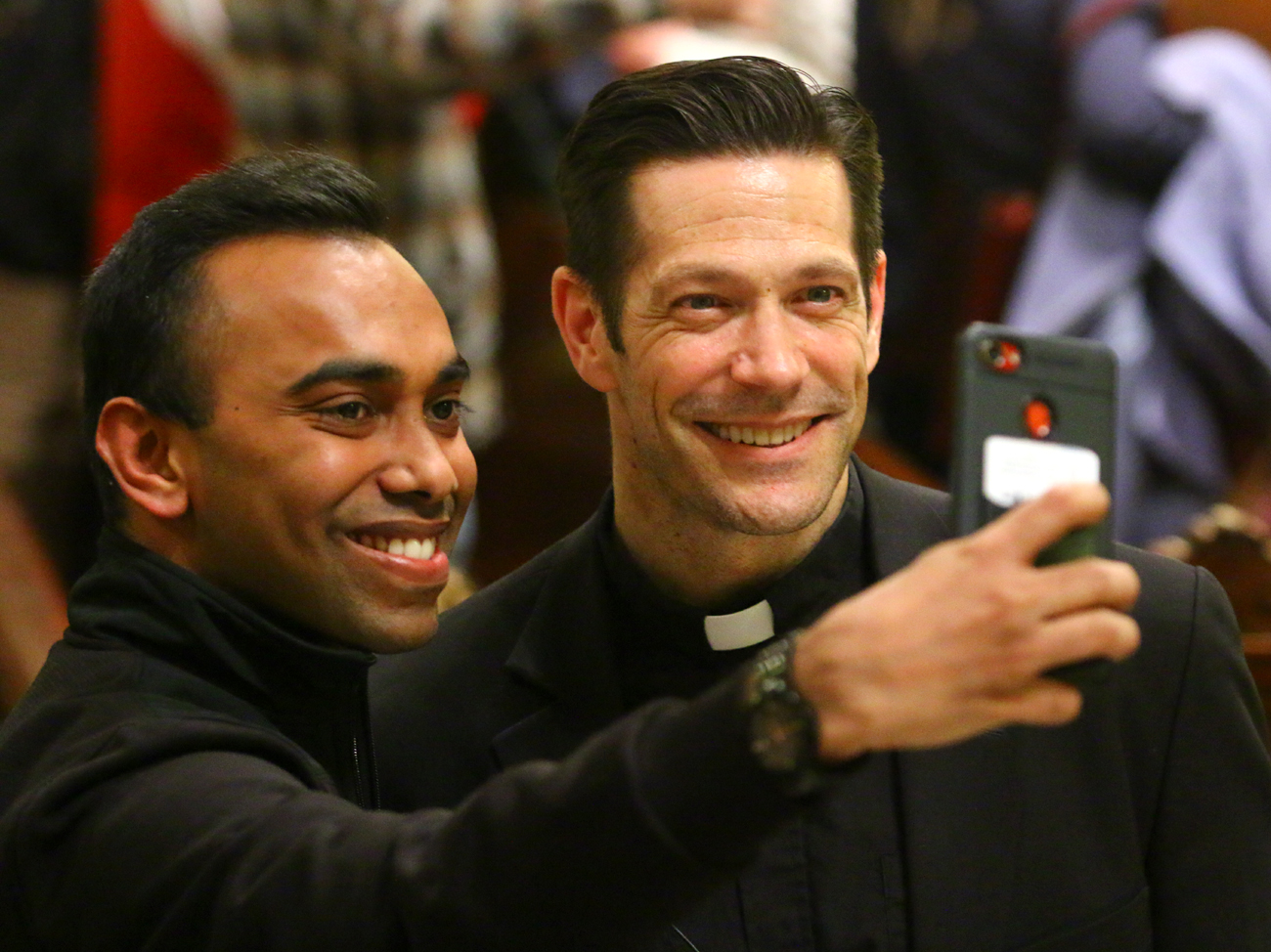 An authentic relationship with Christ is essential to his work as a “professional Catholic.”

“I can talk about Jesus all day long, but the point is that I need to know him,” said Father Schmitz.

Consistent, intentional prayer is vital, he said, adding that “there are as many ways to pray as there are saints” — such as Ignatius of Loyola, whose spiritual exercises have had a profound effect on his own faith.

Evangelization is not a “one-man show,” he said, but requires “a family, a community” and a willingness to be “part of the team.”

“It’s about God, not you,” said Father Schmitz, noting that the Catholic faith should also be presented in clear, accessible language.

Social media can challenge the virtues of both humility and temperance, he observed, cautioning that “it’s way too easy to be consumed” by Facebook and Twitter.

Communications platforms need to be used prudently, based on their inherent strengths and weaknesses, he said.

While he avoids the “hit and run opinions” favored by Twitter users, he uses social media to “connect and disseminate information,” reserving more personal content such as opinions and daily updates for texts he shares only with family and friends.

He regards his YouTube videos as an invitation ultimately to explore the Catholic faith in a parish or community setting. Rather than create a generation of “screenagers” who live in the virtual world, he said, social media evangelization must move individuals from online reality to “the messiness of real relationships.”

“A lot of times when you come to Catholic talks like this, whoever is speaking — especially if they’re a big-name Catholic speaker — can come across as a celebrity,” said Kayla Gesek, a young adult from St. Helena Parish in Blue Bell and a member of the Catholic Center for Young Adults in Philadelphia. “But I feel like his humility just showed through, and it felt like he was just one of us.”

De Sales University sophomore Matt Walton appreciated how Father Schmitz appealed to listeners of all ages by “letting the Holy Spirit work” and explaining the faith “in a way that’s really practical to our daily lives.”

As he concluded a question-and-answer session after the lecture, Father Schmitz challenged his audience to do just that, asking, “When that person (seeking God) shows up at your parish, will they find someone to tell the story?”