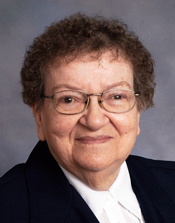 Originally from St. Joan of Arc Parish in Philadelphia, she was the daughter of Irene (Graff) and Joseph T. Smith. She attended Holy Innocents, St. Anne and St. Joan of Arc elementary schools and after graduating from Little Flower High School in 1943 she entered the Sisters Servants of the Immaculate Heart of Mary the following year.

Sister Kathleen received her habit and the religious name Sister Irene Joseph on Aug. 16, 1945 and professed first vows on Aug. 15, 1947.

From September 1946 through June 1979 Sister Kathleen taught children in grades one through seven in many parish schools in the Philadelphia area. From 1986 through April 2004 she served in many different capacities both in school and in her local communities.

Sister Kathleen continued her ministry of prayer and service when she entered Camilla Hall in April 2004 until her death.

She is predeceased by her parents and her brothers Joseph, Thomas (Mary), and her sisters Edna Pickar (Leonard), and Claire O’Hara (William). She is survived by her sister-in-law Jane (Joseph) and many loving nieces and nephews.

NEXT: Sister dies at 100; served 73 years in archdiocese