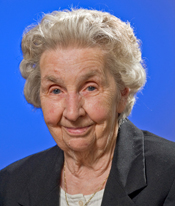 Sister James Frances McGlashen, O.S.F., 100, died Jan. 8 in Assisi House, Aston. She would have celebrated her 101st birthday Jan. 18. She had been a professed member of the Sisters of St. Francis of Philadelphia for 76 years.

Sister James Frances (formerly Josephine Marie McGlashen) was born in Philadelphia where she was a member of St. Anne Parish and a graduate of John W. Hallahan High School. She entered the congregation in 1941 and professed her first vows in 1944.

She earned a B.S. in education and an M.S. in business, both from Marywood College in Scranton. She ministered primarily in education on both elementary and secondary levels.

Besides her early years in ministry as a novice teaching for four years in the Archdiocese of Baltimore,

Her later years in active ministry were at St. Mary Medical Center in Langhorne where she served as a volunteer. In 2017 Sister James Frances moved to Assisi House in Aston where she served in prayer and hospitality ministry.

The wake, viewing and funeral Mass were celebrated Wednesday, Jan. 15 at Assisi House.
Burial followed in Our Lady of Angels Cemetery in Aston.

Sister James Frances is survived by nieces, nephews and by her Franciscan family.