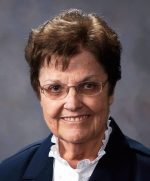 Born in Philadelphia, she attended Most Blessed Sacrament School and graduated from West Catholic High School in 1963. She worked at Bell Telephone Co. for three years before entering the Sisters, Servants of the Immaculate Heart of Mary in 1966. She received her habit and her religious name, Sister M. Alice Michael, on June 27, 1967 and professed her first vows on June 28, 1969.

In the congregation she earned her A.B. degree from Immaculata University and her M.A. degree from Glassboro State College.

Beginning in 1969 Sister Alice Michael taught primary grade children for 34 years. From 2003 to 2009 she served as local superior at St. Joseph Convent in Downingtown and taught fifth grade children.

Her full-time ministry turned to tutoring. Sister Mary was a masterful teacher. She tutored children at Seton Academy in Bethlehem, Pa. for one year and at St. Dominic School in Philadelphia from 2010 through 2014.

Sister Mary came to Camilla Hall in August 2014, generously offering her prayers and praise until after a long illness, she passed into heaven.

She is predeceased by her parents Michael and Alice (Scully) O’Connor and her brother Michael (Anne). She is survived by her loving nieces Mary and Lisa, her grandnephew Connor, and her grandniece Kate; also many loving friends, her “band” and her Congregation of I.H.M. Sisters.

NEXT: Sister Ruth Ruster dies, was convert then religious for 66 years