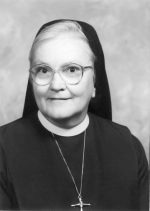 Sister Joseph Francis Stauffer, I.H.M., died Jan. 14 in Paoli Hospital. She was 92 years old and in the 74th year of her religious life.

Margaret Rose Stauffer was born on July 12, 1927 in Philadelphia and a member of Good Shepherd Parish. After graduating from West Catholic Girls High School in 1944 she completed courses at Immaculata University.

She entered the Sisters, Servants of the Immaculate Heart of Mary on Sept. 8, 1945, rreceived her habit and her religious name, Sister Joseph Francis in 1946 and professed her first vows on Aug. 15, 1948.

From 1948 to 1985 Sister Joseph taught children in grades one through seven. She later tutored children at St. Matthew School in Forestville, Connecticut to 1988. She then assisted in the Activities Office at Little Flower High School in Philadelphia for the next 17 years.

Sister Joseph arrived at Camilla Hall in August 2005 with a heart full of loving service and prayer, which she continued to render until her death.

She is predeceased by her parents Joseph and Margaret (Joyce) Stauffer, her brothers Henry (Margaret), Francis (Marie) and her sister Mary Dark (George). She is survived by many loving nieces, nephews, grandnieces, grandnephews, and her Congregation of I.H.M. Sisters.

PREVIOUS: Sister Gertrude Provost dies at 91; had served in Pakistan